Looking for a new building project to include in your Minecraft world? Check these out! 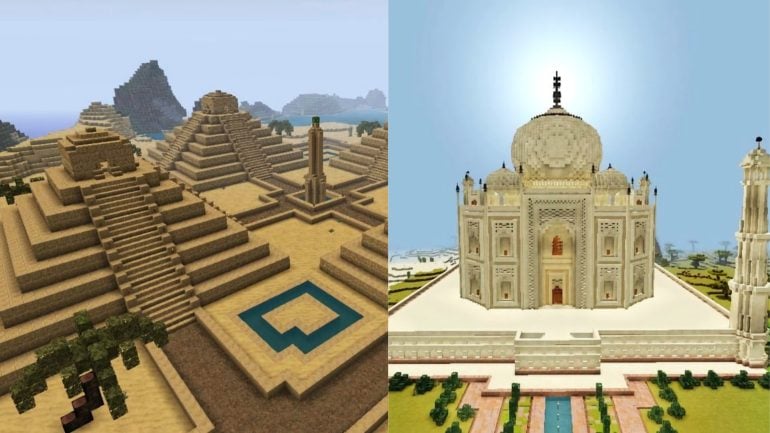 Building is a core aspect of Minecraft, with many players engaging in massive builds that have made a considerable impact on the community. Since Minecraft is made up of blocks, you can scale anything you build as much as you want to, depending on how large you want the buildings to be. Sometimes you get to the point where you have done everything you can in survival mode, and just want to have some fun in creative mode.

If you’re looking for things to build in either creative or survival mode, we have prepared this list of the best Minecraft building ideas. These projects are massive undertakings that are extremely fun, especially if you have multiple people to do them with.

We sincerely hope that you can find something new, challenging, and fun to do in your Minecraft world. If you’re the type of player that prefers to play with other people, you should take a look at the best Minecraft Bedrock servers. If you want to alter your survival experience, check out the best Minecraft modpacks!

The best thing about building anything in Minecraft is that you’re completely free to modify any build according to your preferences, and there is no better build for that than to build a maze. Mazes are usually fairly complex structures that are a joy to run through, especially if you make it a game for multiple players to enjoy. This maze design is straightforward and interesting to build, and anyone can build it.

If you’re ever looking for a palace to call your own, why not kick it up a notch and build the Taj Mahal? The structure is beautiful in real life, and it’s quite nice to recreate it in Minecraft to appreciate it. It takes a lot of time to build due to its scale, but it is well worth it since you can utilize it as a base if need be. In the world of Minecraft building ideas, building the monuments of the world is never a bad idea.

If you find that your desert biomes are looking a bit empty, you can always fill up the empty space with a gigantic pyramid. This build is absolutely massive, so it’s a bit hard to build it in survival mode, but it is completely worth it because what’s cooler than having a massive pyramid in your world? Not many things, if we’re being honest. It’s one of the best Minecraft building ideas because it’s so fun!

Another interesting thing to do is to build an entire city in Minecraft. Since this is one of the largest builds you can take on, it is best to include some friends in the plan. The idea behind this is that it can easily be customized depending on what you want your city to have. This specific city design has many things already incorporated into it, so it’s quite convenient for any server.

If your base has a sizeable body of water next to it, and you want to establish a marina, you should consider checking out this lighthouse design. It is colorful and it actually works, turning itself on when night falls. The best Minecraft building ideas can be mixed and matched with one another to create fantastic bases, and this one is perfect for that!

Pagodas are beautiful, fantastic buildings that can be found everywhere across Asia, and they are usually presented as Buddhist temples where people go to pray. The architecture of Pagodas is very satisfying and pretty to look at, so it’s quite nice to add to your Minecraft world, especially if you want to have a specific theme for your world. It is definitely one of the best Minecraft building ideas.

If you’re a fan of The Lord of the Rings, and you prefer Dwarves, then you’re going to absolutely love this design concept. This design utilizes the massive areas you can find underneath the top layer of the world and builds upon them, creating a large city with different benefits to it, so it’s both convenient and beautiful. Of course, this build is probably one of the biggest things you can do in Minecraft, so it’s going to take a lot of effort.

Castles are always cool. The vast possibilities of the different castles you can build are quite appealing for any player that wants to build one, and if you want a reliable and interesting castle build, this one is for you. This castle in particular has many of the same aspects as other classic historical castles, and there is a decent amount of complexity without being impossible to build for new players.

When you’re playing survival mode, one of the best things you can do is build a fantastic house right off the bat so you don’t have to deal with a mud hut for hours on end. This mansion design is large, comfy, and cozy, and it has all of the facilities you could need for survival, so it’s perfect for both new and veteran players! Usefulness is a popular trait of the best Minecraft building ideas, and we’re all here for it!

If your base is comprised of multiple islands, you might want to build a bridge or two, just so it’s more convenient to move from one place to another. This bridge, in particular, fulfills its purpose quite well, while also having a bunch of decorations that make it more pleasant to look at, ideal for colorful bases that are defined by their beauty.

That concludes our list of the best Minecraft building ideas! They are extremely interesting and can provide a good challenge for players of all skill levels, and are great when you want to gain more building experience. If you want to play some other games and take a break from Minecraft, take a look at the best free PC games, best war games, and the best tank games!