Want a new project to make your game better? Check out some of these Redstone ideas! 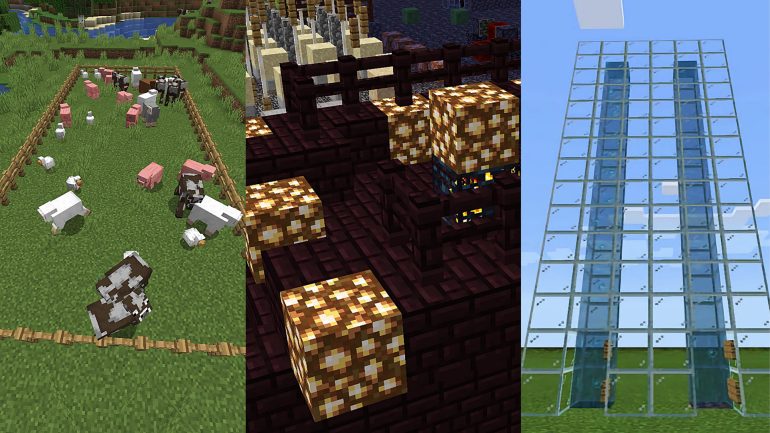 One of the most overlooked aspects of Minecraft is Redstone and everything you can do with it. People mostly use it to activate small mechanisms, such as single pistons and detonating TNT, but there is so much more potential. You can create massive automated farm structures and actual electronics, so you should check it out and see what you can add to your world.

To help you understand the deeper sides of Redstone engineering, we have prepared this list of the best Minecraft Redstone ideas that you can immediately incorporate into your world, provided you accumulate enough resources to make everything work.

Redstone engineering has been memed to be akin to quantum physics because of its complexity, but if you prefer to keep things simple and focus on aesthetics, check out our other articles like Minecraft Bedrock servers and the best Minecraft banner designs.

We’re going to start this list with a design that was made to make your experience in survival mode much easier. XP can take a very long time to farm up, and this XP farm utilizes sugar cane to allow you to farm copious amounts of experience points at the drop of a hat. A massive plus to this design is that it’s fully automated using Observer Blocks that manage everything and determine when the bamboo should be harvested. Take on this build if you do not want to grind for experience.

Many of the best Minecraft Redstone ideas have something to do with improving the quality of life in your survival world, as well as increasing the convenience of getting the most basic resources. This farm is centered around getting a very large amount of meat or other animal resources, depending on what you need. All of the animals you need are crammed into one block with a fence post on top of them, to keep them inside. With this farm design, you won’t have to sacrifice massive amounts of land to farm animals, and it makes everything more convenient!

Blazes are often one of the most terrifying beings in Minecraft for first-time players, and that’s because they have very valuable resources necessary for completing the game. At some point, when you’ve completed the game multiple times and you just want a steady stream of resources for completing the game when you eventually want to finish the game, a design like this is perfect. It is a relatively simple design that you can capitalize on with no issues.

Coming back to the realm of general convenience in the sphere of the best Minecraft Redstone ideas, we now have a design that addresses one of the most common problems that both new and veteran players have — sorting all of your random garbage in the proper chests. This design utilizes hoppers to feed all of your random items into specific chests, so you can dump everything you have in one place and everything will be sorted. It is not too complex and it can be built quite quickly.

At some point, when you have established a great base and have enough resources to do whatever you want to do, you might want to build a reliable farm that provides you with a lot of food so that you don’t have to worry about it. To this end, you can use this wheat farm that utilizes about 60 sizeable plots of wheat, all of which can be harvested within a few seconds so you can use all of it to make as much bread as you want. It is a massive undertaking that will take a lot of time, but it is well worth it.

Jeb added the Elytra, a special pair of wings that you can use to glide around your world, massively decreasing the hassle of traversing the map in 1.9. The wings are obtained in item frames in the End City, so it’s quite a late-game item, but it is quite worth it. This Redstone idea was made to launch your character into the air so you can start gliding more easily. Usually, you would have to climb up a certain height to get enough momentum for gliding, but this design makes everything much easier.

We all know that you can make automatic doors without any complex Redstone designs, and that is done with a single pressure plate next to a normal door. But what if you have a large base or a project where simple shabby doors aren’t enough? What if you want large, solid doors made of pure iron? Well, this design utilizes some sticky pistons, iron blocks (or any other blocks for that matter), and Redstone. It is fairly simple and doesn’t take a lot of time to complete, so it’s a quick build for any player. Simple designs like these are what we look for in the best Minecraft Redstone ideas.

Another great design for players that want more convenience in their worlds, the ultimate smelter was designed to reduce the time necessary for cooking food and smelting ores. It takes a decent amount of resources, but it is completely worth it if you’re looking to make your life easier.

Some grand designs that players like to do are to remove huge bodies of water and use the remaining land to build whatever they want. However, removing all of this water can be a tedious process that can take hours, since water in Minecraft is finicky and annoying. This design incorporates actual robots (yes, you can make robots in Minecraft now) to slowly move all of the water from one area to another, according to your needs. This is one of the best Minecraft Redstone ideas because it solves a massive issue that has been a problem with builds for years.

Whenever you’re constructing a massive building that might have hard-to-reach areas, you might find it difficult to organize proper elevation methods to get to all of the spaces in your base more easily. To this end, you can utilize this Redstone design. We aren’t sure what sort of magic makes this work, but it utilizes water and Redstone to create a very convenient elevator, perfect for reaching all of the nooks of your base.

That’s all we have to say about the best Minecraft Redstone ideas. As you can see, they are all unique and tackle different solutions to problems you might encounter in the game, so they’re amazing for any player. If you’re looking for more awesome games that aren’t Minecraft, you can take a look at the best free PC games, best horse games, and the best naval games!