Looking to join a Minecraft community? Here are some of our favorite Bedrock servers. 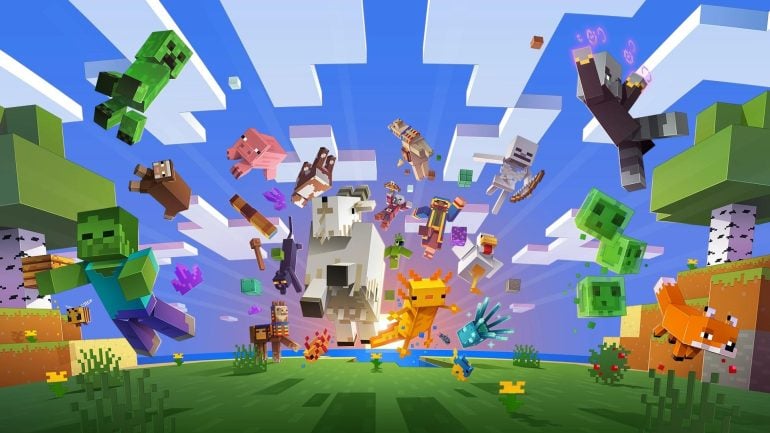 If you want to play Minecraft with as many people as possible, the Bedrock Edition is the way to go. Unlike the Java Edition, Bedrock allows for crossplay between platforms, so players on PlayStation can build cities with PC gamers or go spelunking with their Xbox pals.

When it comes to playing online, the hardest part is picking a server. Every server is different, with its own settings, player limits, and world size. Don’t fret, though; with a bit of time and effort, you’re guaranteed to find one that’s right for you. We’ve compiled a list of some of our favorite Minecraft Bedrock servers to help you with your search. Check out the full list below.

Vasar is a POT PVP server with one of the best PVP communities in Minecraft, making it a great place to find new friends interested in the combat side of the game. Typically there are 40–60 players online at any given time, so there’s always someone to play or talk with.

To make things even more competitive, Vasar has a cool PVP ranking system. The more players you defeat in battle, the higher your rank. However, if you’re still green to the complexities of PVP Minecraft, we’d suggest experimenting with unranked first.

River Network is the Survival server set up and run by Minecraft YouTubers Riverrain123 and Frybry. If you’re the type who prefers a server that isn’t overflowing with players, River Network’s small, tight-knit community should be perfect for you.

One feature that sets River Network apart from most Survival servers is the ability to buy other players’ buildings. The server also supports KIT PVP, if dueling is more your thing.

The BrokenLens server is all about mini-games and fun game modes. And there are a lot of them, too! Enjoy some of the greatest Minecraft mods, like KrazyKart, Sky Wars, Murder Mystery, Best Builder—way too many to mention them all here. Of course, if you’re a vanilla purist, you should probably stay away. For the rest of us, there’s always something awesome and new to do in the BrokenLens server.

As its name suggests, this server brings the wanton mayhem of Grand Theft Auto to Minecraft. If you’ve ever played GTA Online, you know what that means—looting, player-on-player violence, item stealing, and general chaos and destruction. Items are dropped upon death, so other players can steal your items when you die.

Similar to BrokenLens, the Venity server features tons of mini-games and mods that add spice and variety above and beyond the vanilla Minecraft experience. Server capacity isn’t as large as others you’ll find out there — only 483 to the standard 1000 player capacity — but Venity makes up for it with the activeness of its community. There are hundreds of players online at any given moment of the day, making it one of the best servers if you love the idea of a server crowded with other Minecraft lovers.

The Venity server is located in the southeast Asian country of Indonesia. If you’re living outside of Asia, you probably won’t have the greatest experience.

If Prison Minecraft is your jam, then MCPrison is perfect for you. That doesn’t mean it’s the only game mode on offer, but it’s definitely the main one. The MCPrison server is a busy one, with an active community, so you’ll never have to worry about a lack of players. MCPrison is also one of the most stable Minecraft servers around, never once going down in its more than 10 years of service.

The FallenTech server offers a few of the most popular Minecraft maps, but it’s best known for its SKYBLOCK! mode. For those unfamiliar, SKYBLOCK! is the open world survival mode made up of tiny islands in the sky. If that sounds like tons of fun, then hop into the FallenTech server.

NetherGames is one of the most popular Minecraft servers in the world, serving thousands of players throughout the eastern hemisphere. Their main server supports up to 1127 players and is almost always filled to near-full capacity.

All the most popular Minecraft game modes are available, including Creative Plots, SkyWars, SKYBLOCK!, Factions, Murder Mystery, and more.

HyperLands is a popular mini-games server where you can meet up and play fun mods like BedWars, SkyWars, Duels, and TheBridge with players from all over North America.

That concludes our list of the best Minecraft bedrock servers. We’ve made sure to include a varied collection of server types, so you can find the community that’s right for you, whether you’re a Survival Mode purist or prefer to play the many Minecraft mini-games.