With all of the Minecraft modpacks available to try out, here are a few that stand out. 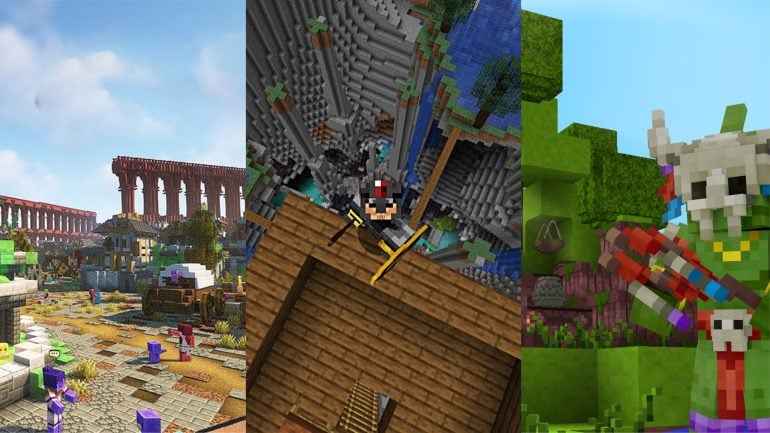 Modpacks are collections of multiple mods that are mashed together so they can all work as one. In Minecraft, modpacks often have a theme or purpose, such as improving a game aspect. It’s much easier to install a modpack than it is to install mods individually and this is where the appeal of modpacks lies.

There are many types of Minecraft modpacks, some of which improve gameplay, such as making Minecraft more difficult or adding more enemies, while others add fun things like vehicles and new tools that make it easier to play the game. Still, others add new textures or change the way the game looks.

The whole reason people choose to install modpacks instead of individual mods is to add much more content without it being a hassle. however, if you are looking for single mods that drastically change the game, you always have the best Minecraft gun mods. And if you are a server enthusiast, there are also the best Minecraft Bedrock servers.

Wasteland is a post-apocalyptic modpack that drastically changes the overworld to ruins, with monsters crawling everywhere. There is a constant sense of danger as you progress through the overworld, but you can manage to defend yourself using the new mechanics such as base-building, turrets, and even firearms for personal use!

The developers have also added many different items that can either be of help or a hindrance to your survival, it is up to you to figure out how to best utilize them. The Nuclear Wasteland is a fantastic modpack for those players that want a hardcore survival experience where they have no idea if they’ll survive until the next morning.

Crypts and Creepers is one of the most fun modpacks out there. Unlike many other packs available, this one actually tells a story of a calamity that struck the world and essentially erased many races from the face of the world, leaving only monsters prowling for their next meal. There is a myriad of items and new blocks you can use to your advantage through the excellent features and mechanics of Crypts and Creepers.

The central focus of the current version of the pack is the Slime race and all of its characteristics. Of course, there is a lot more to discover in this modpack and it will take you a considerable time to discover everything and unravel the story.

Horror is a core staple in many aspects of modern culture, so why not add it to a versatile game like Minecraft? Great idea! The product of that is Horror Craft, a modpack that adds a lot of intense survival situations for you to survive in. The monsters of the overworld are stronger, have better AI, and new abilities, and are generally more dangerous than their vanilla counterparts.

They will always be on the prowl to find you and eat you, with your job being to avoid that at all costs. Other than that, there are even more things to discover in this modpack, from a mysterious plague that needs to be defeated, to blood moon events where the horror is cranked up to 11. Overall, it is a very unique experience that should not be missed.

DarkRPG is a modpack that emphasizes magic, quests, exploration, and the sense of wonder you get from exploring new lands. It takes after all of the conventions of the most popular RPGs while keeping it compact and satisfying for the capabilities of Minecraft.

Like other RPGs, you have classes that you can choose for yourself, countless items to discover, many quests to embark on, and a lot more things that we can’t list in a brief description like this. The best thing we can say about this modpack is the fact that it is a singular experience that every fantasy buff should try out if they are looking for new modpacks.

This modpack brings the entire world of Terraria into Minecraft. It is a massive project that completely changes the base game to be extremely similar to Terraria, complete with new terrain generation. It serves as a great way of appreciating everything Terraria is by putting it into a new perspective as it offers a fresh experience.

The bosses are even available in this modpack as well-designed monstrosities with accurate behavior patterns found in Terraria, something veterans of the game will greatly appreciate. The modpack is getting constant updates because the developers are working hard to accomplish their goal of adding 95%+ of the content from Terraria to Minecraft.

This pack is ideal for players that love engineering and building things, and want to experience the same thrills in Minecraft. It is quite similar in concept to Factorio, a top-down building game where you start from nothing, eventually building up your capabilities to launch a spaceship to leave the planet.

Something that you might appreciate about this modpack is its simplicity. There aren’t hundreds of mods that overlap and cause problems, instead, there are a few mods that work well in tandem for more performance. You, as the engineer, are completely free to explore the world and design anything that comes to mind, making for some fairly relaxing experiences.

Running all of these mods can be a bit tedious at times since your computer might not be powerful enough to run everything properly, so you need some optimization. For that, you should use Fabulously Optimized. It is an open-source modpack that increases your optimization capabilities and makes your mods more stable.

The developer of this modpack came up with it as a way to get players to stop using OptiFine and Forge since there are better alternatives that make the whole modding process more simple. Check out this modpack if you want to learn more about optimization and if you want to give your PC a break.

8. Create: Above and Beyond

If you are looking for a Minecraft modpack that lets you go to space, this is one for you. A combination of science-fiction and survival mods, Create: Above and Beyond is a modpack that will quickly get you off the ground and into the skies. It is made in such a way that you can smoothly go on a technological journey to space, discovering new things along the entire way.

To make your goals a reality, you need to research different inventions that will help you improve your understanding of technology and increase your chances of succeeding. Playing this modpack will make for a fantastic and satisfying experience full of wonder.

RLCraft is a modpack for Minecraft centered on survival. It offers a realistic survival experience with all the distinct challenges and experiences you could go through in real life. Nearly every aspect of RLCraft is brutal. The food can leave your character hungry again within just a few minutes, so you’ll always have to bring plenty of food when you travel far away from your home base, adding to the anxiety.

Other than that, you also have hundreds of new monsters that can either be friendly or hostile, but it’s up to you to decide how to approach them. RLCraft also features intense survival mechanics where you’ll find out that simply surviving in the elements is borderline impossible. Check it out and see for yourself!

Parasitic Apocalypse is a modpack that is difficult to describe. It’s much more than just survival in Minecraft. It’s about surviving in a world overrun with parasites. The game becomes progressively more difficult as infected mobs spread their influence and become a real danger to you. They start relatively weak, mostly just annoying things like spiders and infected pigs, but they eventually grow into giant beasts that can knock down walls in search of new hosts. Even villagers join in the fray as they become parasitized and turn on village folk alike, spreading their plague wherever they go. This modpack is great for players that want a unique survival experience.

How to install Minecraft modpacks

Installing modpacks is quite a simple process that you can do through these steps:

Now that you know the basics of installing mods and modpacks, you can get into more advanced modding. That is combining mods, modpacks, and even textures to create the perfect gaming experience. It can be a bit complicated at first, but you can start small and see where it goes! If you’re looking for more gaming experiences that aren’t Minecraft, you can take a look at the best war games, best cross-platform games, and best RPG games!