Want to go on an adventure in Minecraft? Check out some of these adventure maps! 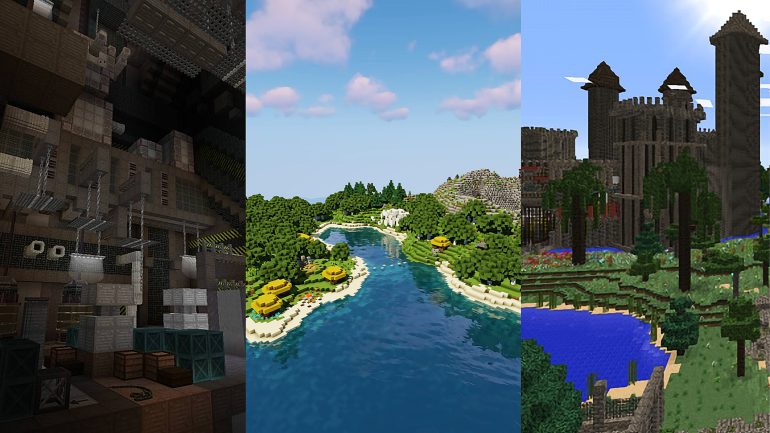 Adventure maps are a big part of Minecraft because sometimes, you can grow tired of the base survival mode and crave something new, something fresh. These maps are excellent because they have a specific theme to them, such as a medieval quest or a detective story. But which Minecraft adventure map should you choose?

To that end, we have prepared this list of the best Minecraft adventure maps you can start playing right now! They have various themes in them so there must be something for you to enjoy.

Praised by many as the best Minecraft adventure map of all time, Terra Restore 2 tells an epic tale of humans, monsters, and animals trying to find balance in a world of chaos and turmoil. It’s about 11-14 hours in length, and there are many features that you can explore during your time here. There is the main story, but other aspects that you can check out, such as challenges, minigames, epic loot, and so much more.

When you talk about the best Minecraft adventure maps, you can’t avoid including some unique ideas that incorporate other players into the mix. Soulbound is a co-op adventure/puzzle map that cannot be played alone since many of the puzzles require two players to complete. Keeping with the uniqueness of Soulbound, both players have separate resource packs that give each player a different perspective of the game. Only one of the players can talk to NPCs, and all of the gameplay is divided into 12 levels. Overall, you can expect a lot of suspense and excitement in this fantastic map!

Now we have a relatively simple map that is extremely well done, as the best Minecraft adventure packs should be like. The main theme is parkour and escaping a facility that is flooding. The developer has specified that the parkour is quite simple to execute, and if you want more difficulty, you can freely change the speed settings to make it a bit harder. The map can also be played by multiple people, ideal for players that like to compete with each other.

The Journey For The Enchanted Crest

In this adventure map, you are in training to become a knight, but before you can finish your training, you find out that the world has been attacked by a powerful outside force that you now have to stop. To stop this calamity, you have to travel the lands and find three powerful orbs that form the legendary Enchanted Crest. Of course, these trials are not easy to complete as they will take you through many dungeons and treacherous places. The Journey For The Enchanted Crest is one of the best Minecraft adventure maps because of its excellent story.

Zelda games have always been a staple in gaming culture, so much so that they have integrated themselves into pop culture completely. The hype for the series has had so much influence on gaming that we have the option of enjoying Project Zelda, a full-blown Zelda game in Minecraft! It is divided into two episodes that cover a completely original Zelda story. That just goes to show how excellent this map is since it takes a tremendous amount of work to create an original story. If you’re looking for an excellent story that will pull you in, take a look at this adventure map!

This is the third installment of a very popular adventure map series, Assassin of Steve. In this version, your job is to journey across the land to find the domain of the Assassin of Steve to stop him in his evil plans. To stop you, there are many End Ships and Endermen pursuing you. It is of vital importance that you avoid these creatures in order to see the story to completion. The culmination of the story is amazing and you should totally check it out!

Now we have another map inspired by The Legend Of Zelda. It’s quite common that the best Minecraft adventure maps have so much correlation with Zelda since the story of that series is amazing and can act as a fantastic base for any fan-made stories. Diamond Sword RPG 1.3 is a full-blown adventure where you will traverse the land looking for quests to complete, and all of them are so well made that you will forget that you’re still playing Minecraft. It’s more than worth checking out!

Time for some Sci-Fi action! This map is great for players that are fans of the Metroid series and everything it represents. In this map, you play as Samus Aran who has no more objectives to complete but is pulled into a world where she has to fight for survival while simultaneously fighting your past. There are quite a few levels to complete, all with varying enemies and objectives, which are extremely satisfying for any fan of Sci-Fi gaming.

The Legend of Willow Valley

The Legend of Willow Valley tells the epic tale of an adventurer that receives a strange letter inviting them to come to a foreign land where magic is real and they are needed. On your way there, you will be pulled into a world of magic and fantasy where you can explore various dungeons and places that will slowly point you in the direction of the main quest. There are puzzles and much more to discover once you jump into the world of Willow Valley!

An Adventure of a Lifetime… A Fully Voiced Adventure

As you might assume, the main point of this adventure map is voice acting and adding immersion to the general experience. The best adventure maps always go above and beyond to deliver an unforgettable experience, and this one does that flawlessly. It’s a classic story of the reluctant hero being dragged into things that are much larger than they are, and they have to adapt to the situation and rise to the top. There are hundreds of additions to the base game that make this map incredible.

That would be all when it comes to the best Minecraft adventure maps. As you can see, they vary wildly in the theme so there is certainly something for everyone. If you’re looking for other games to take a break from Minecraft, you can take a look at the best mobile war games, best mobile games, and the best free PC games!