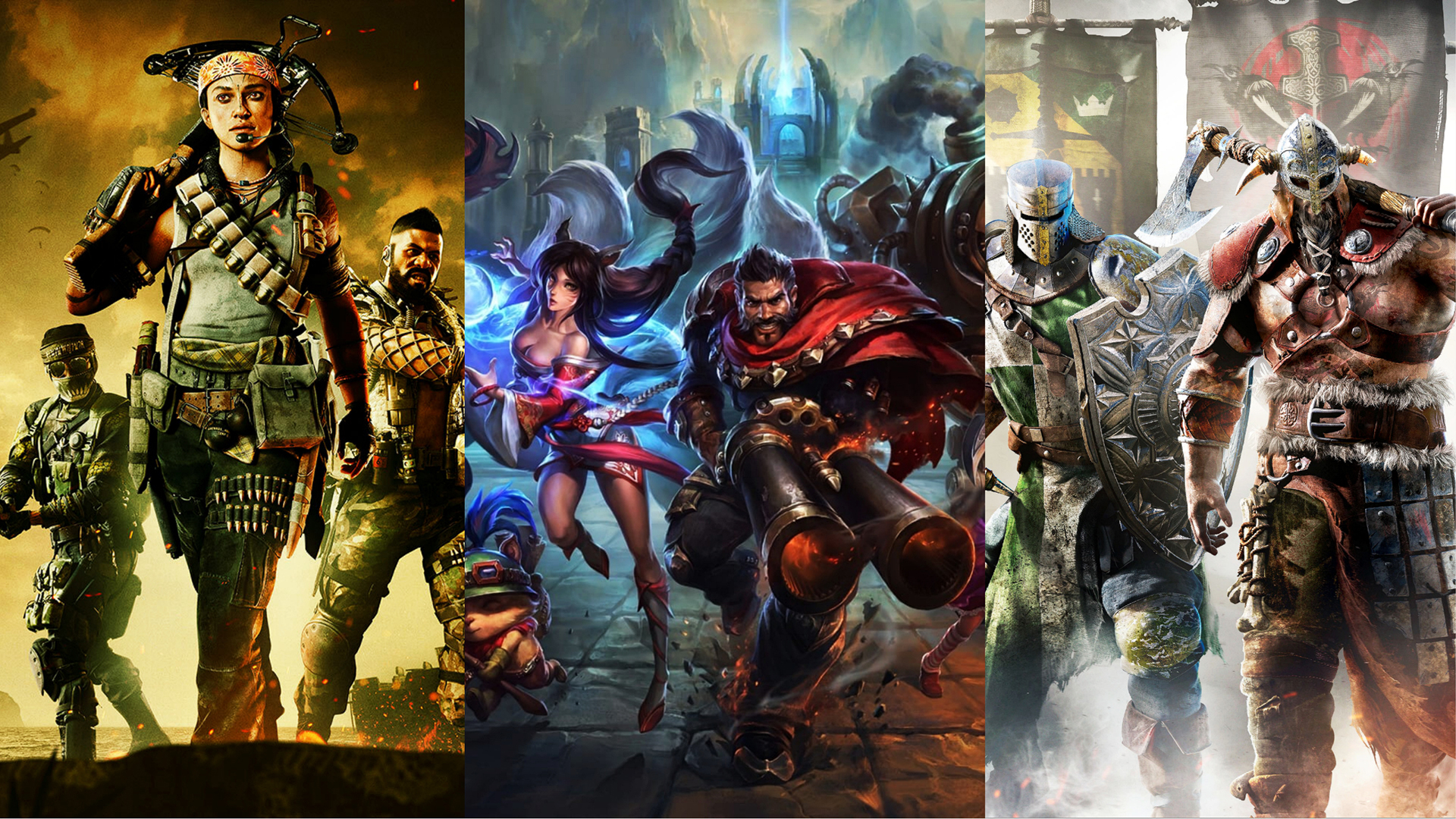 Best multiplayer games to play in 2023

Enjoy these amazing multiplayer titles with your friends!

When you want to have fun while playing a game, you either want to have a singular experience where you enjoy the game by yourself, or you might want to play with your friends for some banter and memes. The best multiplayer games are extremely fun for everyone involved and they constitute a massive portion of gaming in general. However, it can be difficult to find a good, reliable game that you and your friends can enjoy consistently. Lucky you, though, you have us!

To find the right game you need an overview of their general structure to know what they offer. We have compiled this list of the best multiplayer games you can jump into right now. Some of them are older titles, while others a fresh out of production. The most important thing about many of these games is the competitive spirit, where you want to prove your skills and perform better than the enemy. Hopefully, you can find the next best thing!

We pride ourselves in delivering the most accurate information available so you can make the correct and informed decision about whatever the topic is about. This is just as important for the best multiplayer games as it is for any other genre. Speaking of other genres, you might want to check out the best RPG games, as well as the best tank games to discover something new!

Valheim is one of the newest and most viral games that have recently come out. In this game, you play as a Viking that needs to use the available resources of the land to create tools and shelter so you can progress. Should you decide to include some friends into the mix, Valheim turns into a game where you and your Viking tribe can work together in order to survive and prosper. Of course, there are enemies in the game that can damage your and your structures, so you need to be careful and create weapons to defend yourself with. The game is extremely pleasant to see since it does not use next-gen graphics but instead focuses on simpler graphics where the story and gameplay take precedent over anything else. All of these aspects make Valheim one of the best multiplayer games you can play.

You know what this is. League of Legends is a MOBA game where you select a Champion to control along with 4 other players. The game starts with your team on your side of the map, buying items to get ready for combat. The map is divided into 3 lanes and a jungle where players need to organize themselves. In the lanes, there are waves of minions that walk in a straight line to destroy your towers. XP allows you to level up your abilities and use them against the other team. The Champions cover a wide range of themes and roles so there is something that works for everyone. The roles are divided into Support, Bottom, Top, Mid, and Jungle and each one brings something different to fights against teams. Support, for example, is focused on either controlling the enemy team, or providing heals and shields for your own team. Over the years, League of Legends has cemented its status as one of the best multiplayer games. Even after mastering the steep learning curve, there is a lot more to discover in this brilliant game!

One of the most popular and best multiplayer games in recent years, Call of Duty: Warzone is a battle royale game that follows the same formula as others but of course, with some cool Call of Duty flair. Players are dropped to a map against 99 others with the goal of being the last person standing. Weapons are available across the entire map, so you can pick and choose what works for you and what you play best with. There are a lot of other features that can be enjoyed to the fullest only by stepping into the action yourself. If you include some friends to bring with you into a squad you can expect some excellent banter, as well as a more refined tactical approach since you can communicate with each other to ensure victory.

You wouldn’t expect soccer and cars to go well together, but it’s actually a very nice combination that has provided a lot of fun for many players worldwide. Rocket League is a game where you take control of a car of a soccer field along with 1-7 players all battling each other for control of the ball. The only goal is to have fun and manage to score a goal or two. All cars have the ability to boost their speed to reach the ball faster and to set up their plays accordingly, which has led to thousands of highlights you have probably seen somewhere on the Internet. Rocket League has the potential to provide you with hours of content to enjoy because each game has different circumstances which make it unique in every way. Definitely one of the best multiplayer games you can jump into immediately.

An incredibly complex team-based strategy shooter, Tom Clancy’s Rainbow Six Siege is the pinnacle of tactical esports games. To explain it simply, the game is very similar to the general formula of other games like Counter-Strike, where 2 teams are placed on a map with their own goals, such as planting/defusing a bomb or completing a certain objective. When you start a game you can select an Operator from a long list of them. Each Operator is completely unique and has its own abilities and benefits that are useful for any team. For example, you can have an Operative that does not carry that much firepower, but they have surveillance skills to observe the map and tell you where the enemies are. The complexity, while daunting, is quite necessary for making sure that R6 is one of the best multiplayer games available. Much like you might assume, the game has a very steep learning curve but once you manage to learn a handful of Operators you can find yourself useful with any squad. To even further increase the enjoyment of playing this game, get together with your friends on Discord so you can communicate efficiently and win more easily.

For Honor is one of the best multiplayer games you’ll ever play. It is set in a fantasy world dominated by the different factions available in the game. You have Vikings, Knights, Samurai, and Wu Lin. The game has a very nice story-driven campaign for each of the factions and you have to play as a warrior instrumental in winning battles. While the campaign is amazing, the part of For Honor that is particularly important is the multiplayer part of the game. In multiplayer, you choose whichever warrior from your respective faction to take part in action-packed game modes such as Dominion, Brawl, and Duel. There is never a dull moment in the game because every hero you select has a different fighting style and their own unique weapons you can use to outplay your enemies.

An excellent adventure game, Sea of Thieves is all about pirates. You are a pirate controlling your own ship on the open seas in a massive open world. The multiplayer aspect comes from the fact that you can meet other players while sailing, so you can form alliances or battle it out to see who is stronger. There is a goal you and all other players need to fulfill, and it’s essentially making it to 3 different trading companies to deliver goods. This adds to a progression system where achieving level 50 for at least 3 companies will put you into the ranks of the Pirate Legends. On paper, the process seems like it’s straightforward and simple, but when your friends would prefer to do their own thing while you’re all on the same boat can get a bit distracting at times. However, that is all part of the grand scheme of the game — having fun and going on adventures. Adventure and everything else that defines this game is what makes it one of the best multiplayer games!

Overcooked is a third-person cooking simulation game where you and a group of players (preferably your friends) are placed in a very unsanitary kitchen where orders will periodically roll in and you have to cook everything step-by-step. Mind you, these orders aren’t that complex since each meal is completed in 3-4 steps usually. The problem comes from the fact that each cooking station (steaming, washing, boiling, etc.) is in a different place in the kitchen so it can be tricky to get a workflow going. Having moving platforms, holes, and traps spread out across the kitchen doesn’t help your situation too much. Nonetheless, no matter how you perform it’s always a fun experience since the game is chaotic by nature, so all of the stress that comes from it is the good kind. Bonus point: all of the little chefs you play as are humanoid animals that are extremely cute! This game serves as evidence that you do not need next-gen graphics to be one of the best multiplayer games.

One of the titans of the online multiplayer scene, Counter-Strike: Global Offensive is a game where two teams of five players are placed on a map that has specific heat points where most of the action takes place. In the classic game mode, one team has the goal of planting a bomb on one of the heat points while the other team has to defuse it. Killing all members on one team will give you the win for the round. The gameplay is very strategic and fun so a cohesive party of players is going to prosper here especially. Most people who know anything about gaming have heard of CS:GO and the massive esports scene it has, where thousands of dollars are on the line. As you might assume, this is definitely one of the best multiplayer games you can play. This gives you an idea of how good the game might be and take it from us — it’s never too late to start playing.

Minecraft is the best-selling game of all time. It is masterfully crafted to give the best possible experience through the magic of simple block placing. In the game, you assume the role of Steve, a man in a world that is way too big for him. You have to use the resources of the world to create shelter and tools for yourself. Upgrading tools is done by going from wood to stone to iron and so on. This is fairly straightforward for anyone who wants to play and is enough knowledge to keep your going for hours on end. When you get into the game it is primarily a single-player experience, but you can find lists of the thousands of servers available online to enjoy the game with other people. The complexity of the servers can vary depending on what the host wants — some servers can be exactly like the singleplayer mode except it’s with 2 players, while other servers are insanely complex with convoluted systems of commands and rules, as well as factions, games, automated experiences, and events. It’s a great, wholesome experience if you want to just relax and play one of the best multiplayer games!

That would be it! The best multiplayer games are very important today because they maintain the sense of community you can have with your friends and strangers online as you all have fun and create memories. If you want more games that are multiplayer and for your mobile device, take a look at our best mobile RPG games article!