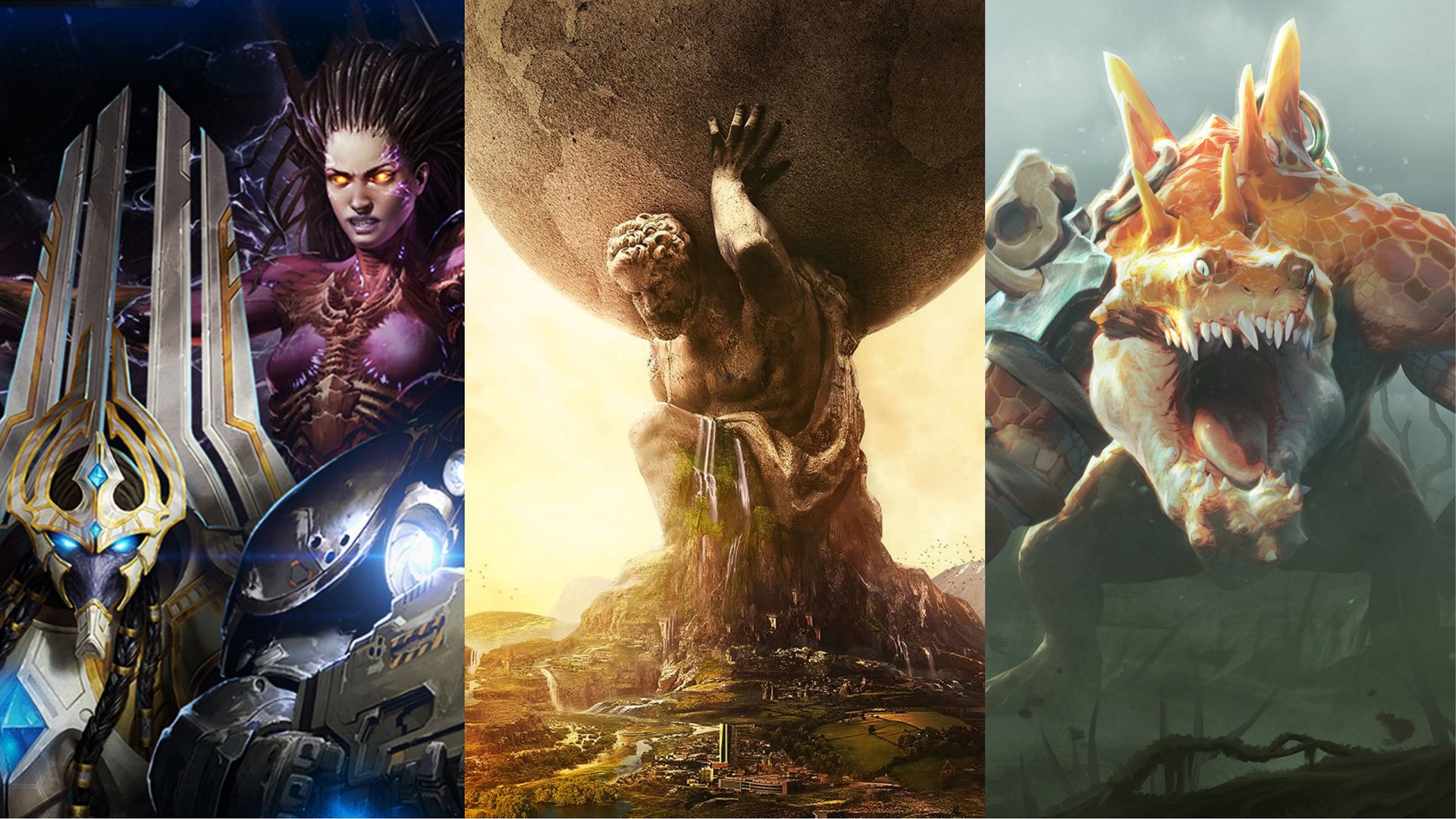 Force your opponents into making tough decisions through these fantastic titles!

RTS games are a great way of spending time with your friends, or alone if that’s your thing. What makes RTS games unique is their excellent approach to gameplay compared to other, more traditional strategy games. Here, every decision you make is in real-time and doesn’t require you to wait for your turn to do something.

Due to this, RTS games are a favorite among players who want to think on the spot and outsmart their opponent in the most efficient way possible. There are different “genres” that the games carry, with some being combat-oriented, while others are purely strategic and focus on managing units for the most efficient approach to gameplay. If you’re looking for the best RTS games, then you’ve come to the right place!

We all know that games come in many different shapes and sizes, so you might want to diversify your library with other genres of games. If this is true, then make sure you take a look at the best free PC games, as well as the best mobile multiplayer games!

To start things off, we have one of the best RTS games in history, which has paved the way for every other game after it. StarCraft II: Wings of Liberty has three campaigns for the three respective races in the game: the Zerg, Protoss, and Terran. Each of these races has its distinctive features that differentiate them from other units, which also carries different ways of playing. The main story follows Raynor, a grizzled captain of the Terran army, and his journey to combat the Zerg. You’ll find that the game has a ton of content to enjoy, with 29 campaign missions available to you. Some of these are even based on your choices throughout the story, along with one secret mission. Now that you know what the game is all about, you’re free to go and experience the originality of RTS games through action-packed combat!

This is a game that takes a very interesting approach to the RTS genre, with the player having to deal with and manage their resources in a zombie-filled world. The world you’re set in is completely random every time you start a new game, so each experience is brand-new and refreshing. To protect yourself and your buildings, you need to carefully place your defenses most efficiently. When it comes to the zombies, they do not attack too frequently, but when they do they will assail one side of your base to whittle down your defenses in waves, with a later, final wave that comes from all sides in a last-ditch attempt to break-in. You also have the risk of getting some of your buildings infected, which can compromise your base from the inside and spread quickly. Taking all of this into consideration, we can certainly conclude that this is one of the best zombie games you can play.

One of the best RTS games franchises ever, Age of Empires IV is set in the Middle Ages, where the player can choose from 4 playable campaigns. The Normans is about the Viking conquest of England. The Hundred Years War is about a war between England and France. The Mongol Empire is about Genghis Khan and how his empire became one of the most widespread and powerful in history. The Rise of Moscow is about the frigid lands of Russia and how the Grand Duchy of Moscow became an integral force all around the land. As you can see, the game covers many different points in history, so it serves as a great way to have fun, as well as for some education. Age of Empires IV offers great gameplay, a solid story, and a memorable narrative that warrants multiple playthroughs.

This game covers the story of a crumbled military empire doing battle with an invading alien force. Your job here is to control a small rebellious force as you complete various missions. These missions are packed with action and have an emphasis on thinking before you act since the punishment for making the mistake can get severe. All of the maps you play on are procedurally generated so there is always something new to do whenever you start a new game. This also increases the difficulty of successive playthroughs since you can’t rely on the same strategies every time. When it comes to space games, XCOM 2 is one of the best RTS games on the market and every fan of a science fiction setting should check it out!

You can’t make a list like this if you don’t mention Civ VI. This game is so extensive in its complexity and lore that you will have a hard time completing more than one playthrough of it. In this game, your job is to control and manage your empire with a Leader of your choice. Players have the option of choosing between 54 Leaders that have different benefits when it comes to relations, trading, economy, government, and much more. As you play through the game, you’ll unlock many bonuses that can help your country prosper. This is done through research, and it’s quite extensive. Once you start to piece together the needed info for managing your empire properly, you’ll see that there is a lot of content to discover all the time, so there’s never a dull moment where you’re not actively trying to improve upon every facet of your assets. Civilization VI has cemented its position as one of the best RTS games of all time.

Rome: Total War allows you to get into the mind of a competent military commander of the time, starting with three Roman families sent to war to do battle. Like all of the other Total War games, strategic planning of your next move is done from a top-down perspective to see what the battlefield looks like and to see what territories are under your control. Once you get an idea of what your next move is, you can proceed to send your troops wherever you want, even straight into battle if you deem it wise. When it comes to actual fighting, it takes place on a 3D battlefield where you can see the status of your troops and manage them accordingly. There is a lot more to explore in Rome: Total War and the game is one of the best RTS games of today.

Among Us Impostor — guide to winning games as the killer

To understand this game, we first have to tell you about the original — Warcraft III. Warcraft III is set in a high-fantasy world where there is a lot of centralized conflict between the different races in the game. You have the option of selecting a Champion to control as you traverse the procedurally generated map killing units and gaining experience points to level up and get stronger. The story is rich and iconic, something we can see with other games that have been published over the years that take inspiration from Warcraft III, such as Dota 2, League of Legends, World of Warcraft, and many more. Warcraft III: Reforged retains all of the base gameplay elements of the original game, except it has new features and updated graphics to bring the iconic gameplay to a new light. There are also some improvements made to the multiplayer mode, so new players can experience all of the charms of the original game with more pleasing visual effects! Warcraft in general has established itself as one of the best RTS games ever.

Dota 2 is a titan in the MOBA genre, averaging a high number of concurrent players, as well as having one of the highest-paid international championships in the entire gaming world. In this game, you take control of a hero and jump into a match with 9 other players. The goal is to level up your character and fight the enemy team, and if you win you need to take down their towers and eventually, the Ancient. Matches usually last between 30 to 60 minutes, with rare exceptions lasting longer. While the learning curve is a bit steep, players who master the basics can expect to spend thousands of hours in-game, trying out different heroes with different combinations to see who comes out on top! Dota 2 has perfected itself over the years to become one of the best RTS games around. If you wish to learn more about this amazing game, then take a look at some statistics and facts.

The Lord of the Rings: The Battle for Middle-earth

Here we have a game that is excellent for fans of the brilliant books by J. R. R. Tolkien. In this game, players have the option of choosing between the light and the dark side, each of which has its own respective campaign. You assemble armies, gather resources, engage in battle, and try to manage your troops in such a way that the enemy is overwhelmed and you can claim victory. Each side has its respective heroes that can be brought into battle and used as the player sees fit. Also, there is a wide variety of skills that a player can purchase from a small tree in the game. These skills have their own categories depending on what you want to accomplish in the game, such as healing or reconnaissance. If you’ve always wanted to take part in the grandest battles in fiction, this is your chance as this is truly one of the best RTS games you can play.

Stepping away from the fantasy games for a bit, we now have a game where all of the emphasis lies in being an adept military commander and leading your troops into battle in the most glorious way possible. The best RTS games are often times military-oriented. Company of Heroes has a rich campaign where you can control the Ally forces of the Second World War as you go through different missions with the sole goal of capturing objectives and destroying the Axis. There is also a very well-made multiplayer mode where you can either play Annihilation or Victory Point Control, the two available game modes. Victory Point Control is your standard point control mode that is present in many other games — you capture a point and hold it as long as possible. Annihilation is all about destroying the enemy buildings before they can destroy yours.

If you want more games that do not strictly fall into the RTS genre, then stop by again and take a look at our list of the best war games. If you prefer a more fantastical route and play on mobile, then check out the best gacha games!