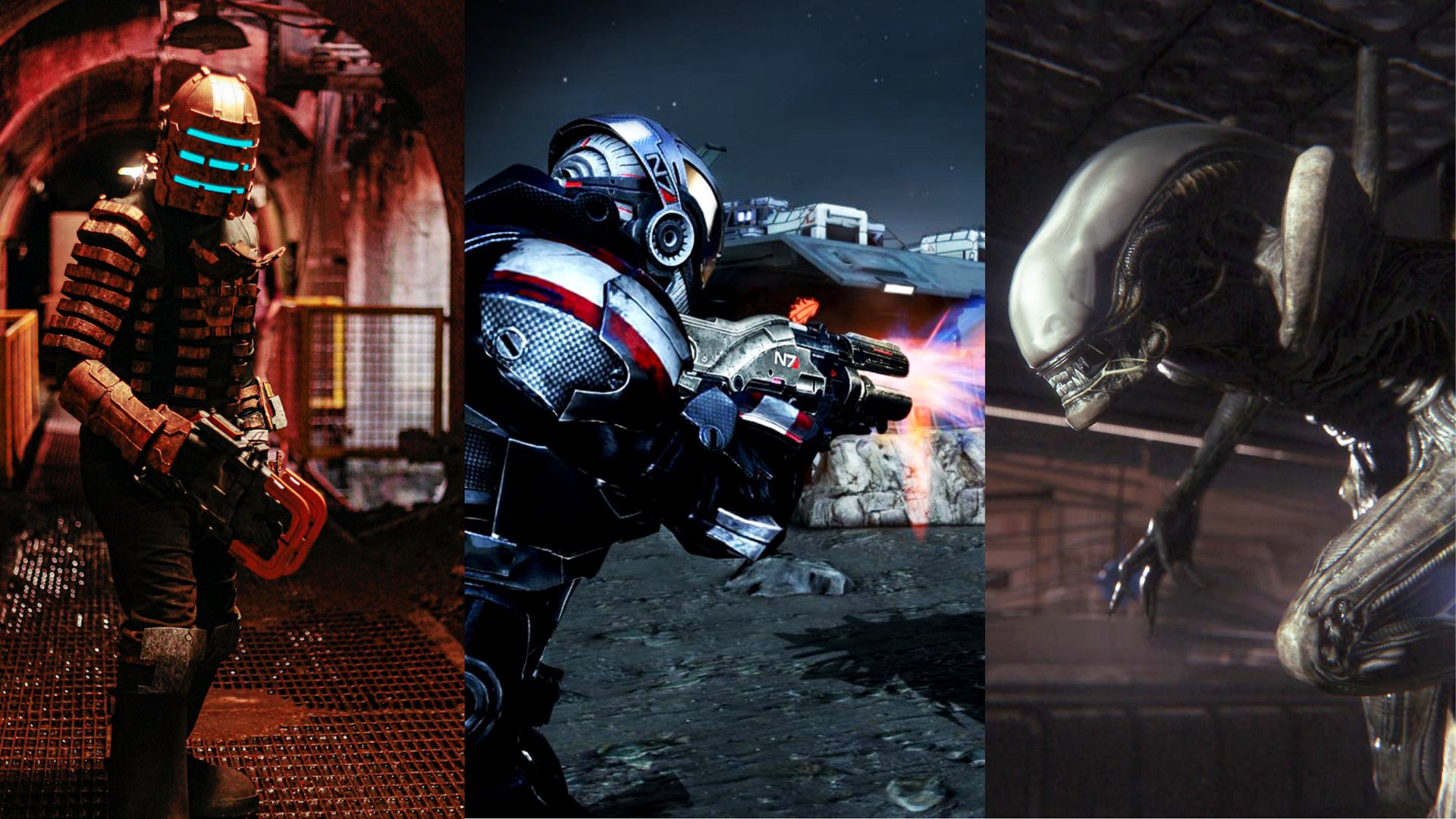 Explore everything space has to offer in these amazing games!

When thinking up a design for a game, some developers tend to think outside the box and take their ideas to new expanses. This led to the creation of space games, where you are thrust into the endless void to fight for your life, or maybe even become innovative, instead opting to tame the endless expanse to make it your own. Everything space games are about can be surmised in those two categories.

But what are the best space games? It can be fairly complicated to make a decent space game since developers need to have the proper artistic vision when trying to make an immersive and creative environment. To help you choose, we have compiled this list of the best space games you can play right now!

Space games aren’t the only genre we delve into, as you can find many different articles like best .io games, or, if you’re feeling adventurous, maybe take a step into the unknown lands of the best open-world games? Either way, we got you covered!

We’re gonna start with one of the best approaches to space combat ever — Mass Effect 3. In this game, you take control of a military commander on a spaceship floating through the cosmos. There are 3 ways to approach the game: Story, Action, and RPG mode. Each of these modes has a different way of getting through the game, mostly just affecting the importance of dialogue vs. combat. Should you select either of the story-heavy modes, then you’ll have a higher emphasis on the story instead of shooting the hordes of enemies called the Flood. Likewise, you can also choose the class your character starts with out of 6 different classes, all with their unique skills. Making your way through the game is going to be a blast, and if you’re a fan of the rest of the games in the series, you can even import your save file from Mass Effect 2, which will make this game take your previous decisions into account while you play. Overall, Mass Effect 3 is definitely one of the best space games out there!

Outer Wilds is a fantastic game with an amazing premise: you are an astronaut caught in a repeating time loop who has to figure out how to stop the loop by exploring space as much as possible. You have 22 minutes of exploration time before the game puts you back to where you were at the beginning. All of your knowledge is retained throughout the loops so you can use it to your advantage and be more efficient. Think of this game as a representation of Groundhog Day and how it can affect your progress. Your goal here is to figure out the cause of the loop, and that is done by finding more information about an ancient civilization known as the Nomai. Finding everything you can about these guys will put an end to the loop and the endless supernovas that you have to endure. Out-of-the-box thinking like this is what can masterfully create one of the best space games ever.

Aside from some close contenders, Alien: Isolation offers some of the best and most immersive experiences in gaming. In this game, you play as Amanda Ripley as she searches a derelict ship for her mother after hearing her voice there through a recording. Like with all fictional settings in space, something goes wrong and you are suddenly thrust into an isolated environment with a giant black alien monstrosity sniffing the corridors looking for you. You have to be sneaky and use covert tactics to evade the behemoth unless you want to meet a very toothy demise. Most of the time, you won’t even hear anything other than your own breathing and the sound of the alien creeping through the vents looking for you. Aside from the terror, the antagonist inflicts on you, you also have to complete the storyline and bring your quest to an end. Best played with headphones in a dark room. It’s a perfect addition to the list of the best space games ever released.

Taking a break from the murderous side of things, we now have Kerbal Space Program. This fun little game is all about building your spaceship and completing various missions set for you. The tricky thing is to put together a spacecraft that doesn’t immediately explode upon being turned on. There is an insane amount of complexity in this game, which can lead to you investing hundreds of hours into designing and piloting a spacecraft, all while not even scratching the surface of your potential and the possible combinations you can create. You can spend hours playing this game, something that you should definitely keep an eye out when looking for the best space games. Once you manage to launch your ship, the next seemingly impossible task is to steer it while it is flying through the air, and eventually, orbit, so it doesn’t fly directly into the Sun because of a small miscalculation. You can get certain missions that instruct you to fly to a specific planet, or they might give you more interesting goals like saving stranded Kerbals. Kerbals are the small green companions that help you construct your spaceships. They’re cute.

This game places a very profound emphasis on the infinity of space as it places you in the role of a space explorer who can freely travel between worlds. Each planet you land on has a different ecosystem and many different things to explore. Some enemies will occasionally come to attack you, so you have to keep them in mind as well. Regarding your objective, all you have to do is keep your character alive and explore as many planets as you can. There is no clearly-defined objective since this game is primarily an exploration game, so you can relax while you peruse any number of the 18 quintillion planets the game has to offer. While it did get some pretty harsh backlash from the community when it first came out in 2016, No Man’s Sky has redeemed itself in the best way possible and established itself as one of the best space games.

Finally, a strategy game gets thrown into the mix! Stellaris is one of the best space games with massive proportions, perfect for those players that want large-scale management to be at the forefront of their playstyle. In this game, you are placed in the distant future where space exploration has been perfected, and now you need to assume the role of the commander of a large empire. Think of it as similar to the Civilization franchise, where every action can lead to either positive or negative consequences to your role in the universe. Players choose one of the preset empires to control. From here, you need to customize the various traits of your empire, such as ethics and civics, among other things, then you just continue to rule as you see fit. You can explore the cosmos, wage war, collect resources, or simply exist peacefully in the same space as other empires. It’s all up to you.

This game, even though it came out in 2008, re-defined the entire genre of space horror, producing one of the most immersive and terrifying experiences in gaming history. In Dead Space, you play Issac Clarke, a space engineer stranded on the Ishimura, a mining ship. Almost all hope for survival is lost as twisted beings called Necromorphs to populate the vessel looking for their next meal. The whole infrastructure of the ship is designed to be tight and unyielding, so as you’re walking through the corridors you can’t help but dread turning the corner. Of course, you do have a way of defending yourself, and that is through the means of mining equipment you find scattered around the ship. Issac is a smart guy, so he can use this equipment and improve it to create makeshift weapons. This is one of the best space games because the visual design of the aggressive enemies coupled with the gripping story and tense gameplay create a terrifying experience.

Any fans of the massively popular Star Trek series will find themselves right at home with Star Trek Online. It is completely reasonable to assume that a game made after this series would land its spot as one of the best space games of all time. In this game, you are given a spaceship to control and modify as you see fit. Everything is customizable here, so you can change it up to fit your style. When it comes to the gameplay, Star Trek Online is set during tense times of conflict between the Klingon Empire and the Galactic Federation of Planets. Depending on the faction you support, you can beam down to planets to engage in combat if you want a fast, tense experience, with the game offering a more calculated, tactical approach when it comes to wide-scale space warfare.

Moving on to a turn-based game, Endless Space 2 is a game where you take control of a small empire and build it up to massive proportions to become a titan in the universe. Your empire is managed by the civilization you choose from a list of 12 races and using them, you can conduct research to specialize in whatever branches you want, such as military, business, development, etc. It’s very similar to the Civilization franchise in a way, with the added factor of it being in space. This type of gameplay can appeal to certain players much more than to others since everyone has different tastes. There is a tremendous amount of detail in this game that cannot be properly surmised here, but it is still one of the best space games you can play. Try it out!

One of the best space games that hardcore fans will immediately recognize, Elite Dangerous is quite simple. You are given a spaceship to control as you wish, along with some money. From here, you can freely explore the cosmos looking for quests to fulfill from a wide range of themes. You can be the Mandalorian and take up bounties and assassinations, or you might want to go take a more passive approach and do some trading or mining. The freedom to do whatever you want is what makes Elite Dangerous a fantastic game for anyone looking for a stellar experience!

Exploring the vast expanse of space is as fun as you can imagine, and we hope that you have found a game that you like with this list. If you are still interested, you can also take a look at some of the best zombie games for some gruesome mayhem!