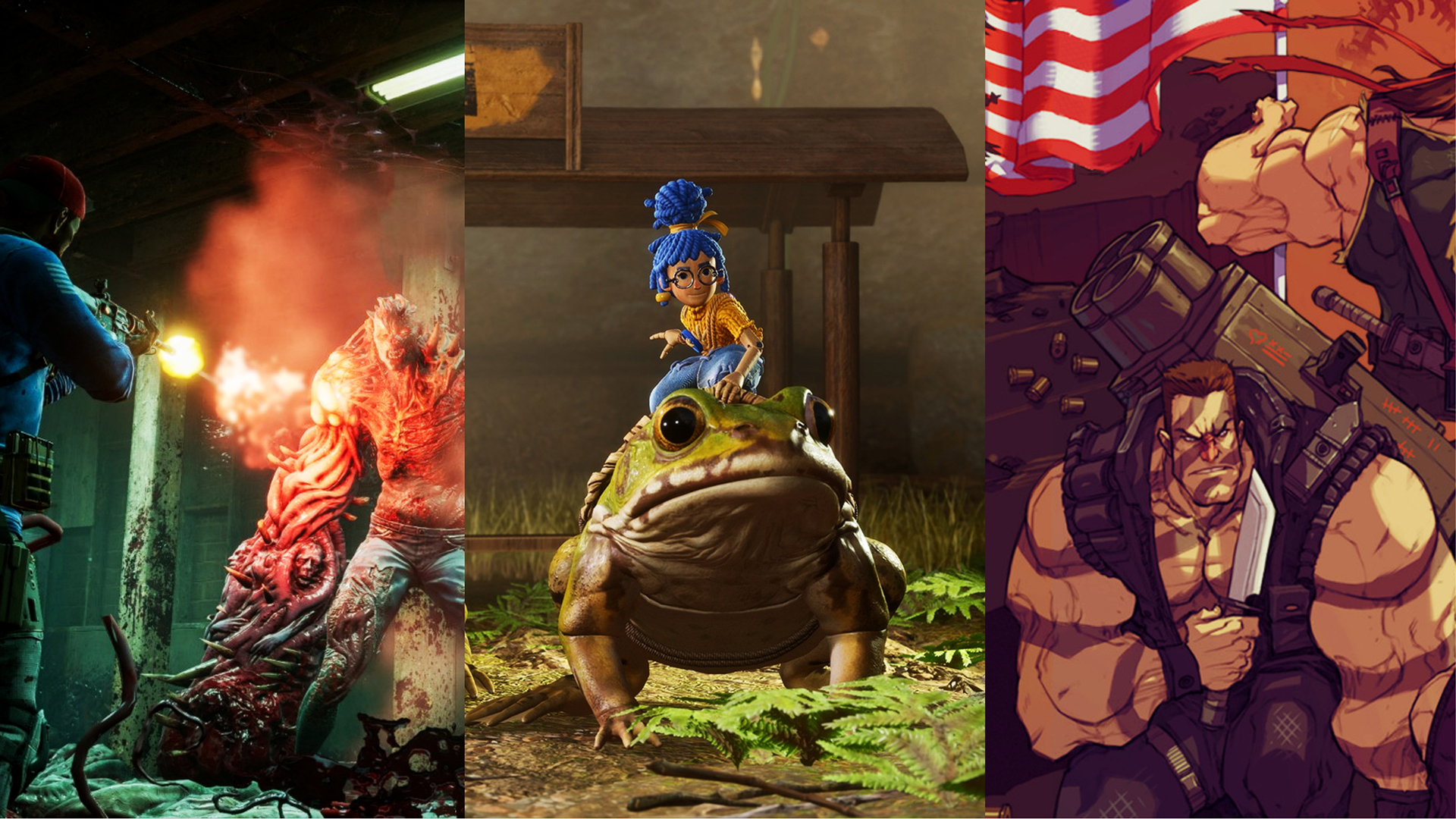 Grab a friend and start a new adventure with these epic co-op games!

Single-player games are great. There’s no doubt about it. Sometimes you just want to jump into an immersive solo gaming experience and just vibe. However, sometimes you might want to ditch the solo questing and add some of your friends into the mix. Playing games with friends is a great way to strengthen relationships and create lasting memories.

To make sure that you are guided in the right direction, we have prepared this list of the best co-op PC games you can play with your friends right now. Of course, not everyone has the same tastes, so we have included a lot of thematic variety in between these titles so you have the best shot at finding something that works for everyone.

Games that are specifically co-op are extremely fun, but what if you’re lacking in the friend department and are looking to make some new friends? Well, fret not, as we also have a list of the best multiplayer games you can take a look at to find a new title!

This is one of the best co-op PC games mainly due to its unique art style coupled with extremely interesting gameplay. In Don’t Starve Together, you are placed on a large map with another player. Before the game starts, each of you chooses a character that has its characteristics for survival. The game is in a top-down perspective and the goal is to… well, not starve. By collecting resources and crafting tools, you can stave off hunger and any beasts that might eventually come for you in the dead of the night. Of course, since it’s a co-op game, you do need to work together to complete the game more efficiently. Once you get the hang of how the game works it becomes much easier to get through it so you can eventually face the various bosses that inhabit the world.

Adventure and the open seas! That’s what this game is all about. In Sea of Thieves, you are assigned a ship that you can control on the open seas to complete deliveries. Many perils await you as you sail, like meeting other players that may or may not have a friendly disposition towards you. However, should you choose to embark on a journey while including your friends, the whole experience becomes more enjoyable and interesting. You can organize all of the boat duties among yourselves as you make your way across the sea to adventure. You’re pirates in this game, so it’s only natural that you should destroy anything you come across and seize all of that booty for yourselves. The reasons this is one of the best co-op PC games is because of its community aspect. There is always something to do in Sea of Thieves, so get your crew together and set sail!

Moving on, we have an extremely cute game, if terribly frustrating. Oh, there’s nothing wrong with the game, what’s frustrating is when you’re waiting for that one piece of fish to be done cooking for your order but Kyle suddenly forgets what his keybindings are and throws it into the abyss at the edge of the level! Just kidding, the game can be a bit stressful at times when you and your friends aren’t the best at multitasking so some confusion can arise. In Overcooked 2, you play as a small animal chef that has to prepare orders periodically coming into the kitchen. The fun thing about this game is the co-op aspect where one player mans each station — one cooks the food, one steams the rice, one washes the dishes, etc. All of the elements of the best co-op PC games are here. The spirit of teamwork is awesome in this game and you’re guaranteed to get some laughs out of it!

One of the best co-op PC games in 2021, It Takes Two follows the story of a married couple planning a divorce and their young daughter’s attempt at stopping them. She hides in the shed to play with her dolls, making them resolve their issues, since she was crying at the time, the dolls magically become her parents and they are forced to work together to complete the myriad of games their daughter envisions. This is a classic adventure platform game, where each level is completely different from the previous one, and where different game mechanics are prevalent. It takes some of the most classic game mechanics of other games and incorporates them as abilities for the parents. It Takes Two is a beautiful story about regaining love for your partner told through a fun platforming experience.

Phasmophobia is a game where a group of up to four players has to get into a van, drive to a location, and explore it to determine what type of ghost is haunting the grounds. It is one of the best co-op PC games with a fantastic premise, and where cooperation and information management are key. Once inside, you can communicate with your party by way of walkie-talkies. Making your way through the haunted building eventually leads you to the spirit haunting the place. Establishing the type of spirit will give you the proper way of exorcising it. You’re supposed to work together to lure the spirit to the proper location, after which you commence the ritual. Phasmophobia is a game that has a lot of variety to it since there are a lot of different spirits and situations you can try out!

Cuphead took the world by storm back in 2017 with its excellent visual design and very high difficulty. Here, you play as either Cuphead or Mugman, two troublemakers who get caught up in gambling, eventually causing the Devil to appear and making him lose all of his contracts. You strike a deal with him to retrieve the contracts in exchange for keeping your souls a little bit longer. From here, each level is a battle against a different goofy enemy, each with varying difficulty. Since there is a lot of variety to the enemies, there is also a lot of added difficulty as you progress further into the game. The thing to take away from the game is that the sense of pride and accomplishment is more than worth it once you and your friend pass that one level you’ve been grinding for a while, and that’s why it is one of the best co-op PC games.

It is an understatement to say that this game is one of the best co-op PC games. Stardew Valley is a role-playing simulation game where you are a farmer who has just inherited a farm from your late grandfather. The farm is in disarray from years of not being taken care of, so it’s your job to spruce it up and become the resident farmer of Stardew Valley. As you play, you will unlock various tools to help you tend to the farm. Likewise, you need to plant crops, water them every day, then sell them to turn a profit. This way, you can purchase upgrades for your farm and be more efficient. The co-op aspect of the game comes when you add another player to the game through a server. The second player has a house on your property and you work together to make the farm the best it can be!

A game all about manliness, testosterone, and GUNS, Broforce is a remarkably well-made side-scrolling shooter game reminiscent of old Metal Slug games. In this game, you assume the of the most popular characters in action movie history whose names have been turned into puns of the word “bro”. This means you have the likes of Rambro, Brobocop, Brominator, Bronan the Brobarian, etc. Each of these Bros has its signature weapon, as well as a special ability that can be used periodically. To unlock all of the Bros, you need to play the game and bust open cages of prisoners, each one freed will give you a new Bro. The gameplay features extremely action-packed levels where you have to shoot terrorists and kill the Devil at the end of each one. Action is the main goal of this game, and it would be one of the best co-op PC games without it! Playing with a friend guarantees that you will have a fun and hilarious experience.

Serving as a spiritual successor to the 2009 classic, Left 4 Dead 2, this game is everything the former was and more. The gameplay is fairly similar, where your group has to kill hordes of zombies, as well as boss variants to complete the level. The kicker is that the levels periodically change as you play, so your original plan of going one way might not work once you get there. This adds another layer of complexity to the gameplay, as well as makes it more intense from a progression standpoint. Each character you play has its abilities and benefits, all of which can be upgraded by collecting the in-game resource — Copper. Definitely one of the best co-op PC games. Overall, it is an incredible game that should not be slept on.

Keep Talking and Nobody Explodes

Now, this is a game that will test your communication skills! Keep Talking and Nobody Explodes is a co-op puzzle game where one player, the Defuser, is presented with a bomb that will go off after the timer runs out. The other player(s) in the game are called the Experts. Their job is to read from a bomb-defusing manual and tell the Defuser how to keep the bomb from exploding. The bombs in question can be fairly complex with different mechanics you need to watch out for when defusing them. This is one of the best co-op PC games as you can get a lot of content from this game because the situations you are presented with can be quite stressful, ideal for friends who want a good time.

This is where our list ends and where we leave you to choose what the best game for you and your friends is. If these games don’t fit your expectations, you can always check out some of the best RPG games, or maybe the best zombie games?