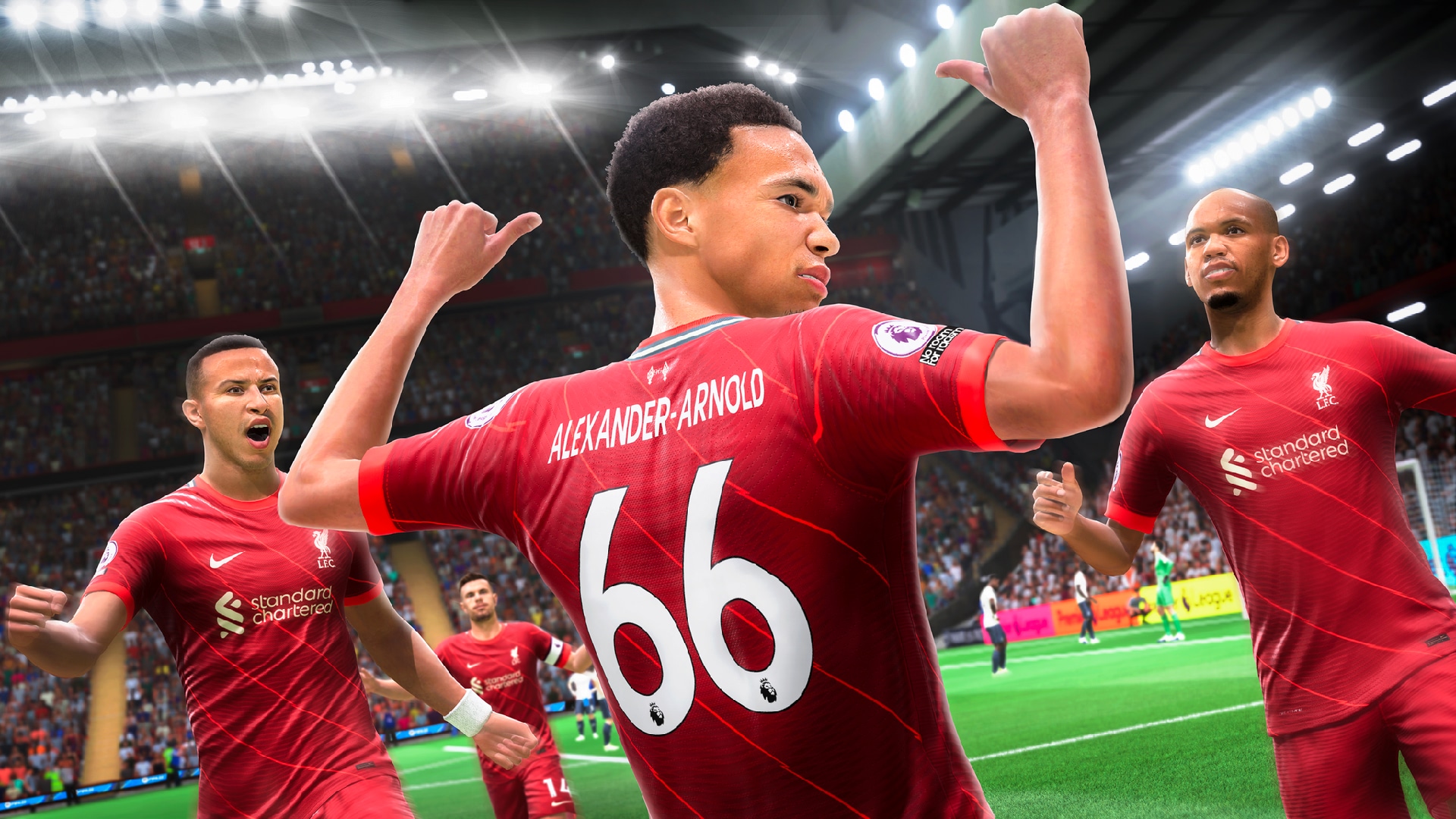 EA Sports’ FIFA series is the biggest virtual sports franchises in history, amassing millions of dedicated fans over the years that love to enjoy the games and play them each year. The games are essentially centered around simulating the real-life FIFA league, so it contains the entire roster of teams and players, and not just from the current season. When you start matches against your friends or random people online, you can also choose from a selection of teams from other seasons and years, making the selection even wider. The first FIFA game was released in December 1993, and the games have since evolved into one of the cornerstones of modern sports games. Since the franchise has produced some amazing games and they are going to be coming out in the foreseeable future, we are going to be taking a look at some EA Sports FIFA statistics and facts to see how the series stands today. If you want to take a look at the growth of the video game industry as a whole, we have that too!

Okay, the series is massive, there is no denying that, but there are very few things that cannot be expressed through the magic of the Internet! Because of this, we are going to be listing some key stats for the EA Sports FIFA franchise and display them in an easy-to-digest format so all of your questions are going to be answered and hopefully you learn something new!

Although the FIFA series is mainly marketed toward console gamers, there is no denying that the series has also had some popularity on Steam, hence the main statistic focusing on Steam players directly. There is no information concerning the total console player count, apart from news about the most recent FIFA games breaking launch records, but this should suffice just the same.

FIFA 22 was (and still is) immensely popular in the world of sports games since it has had more average players on Steam than FIFA 23, and that is for all the right reasons. Many fans regard FIFA 22 as being an extremely high-quality game that is worth the money, and we will take a look at some of the launch stats that the game was able to accumulate in the first 20 or so days of its release.

FIFA 22 had a fantastic launch reaching more than 9 million players logged in to play a match, but its glory was overthrown by the launch of FIFA 23 when it managed to log more than 10 million players and beat it in other areas as well. We also tacked on some sales percentages for all of the consoles that the game is available for, and we can see that, as always, the FIFA series is the most popular for Playstation consoles. Console players rejoice!

There is not much to say about these stats other than that FIFA 22 was just a major hit in the sports gaming niche and the hype surrounding the game was extremely justified.

Something that we can all agree on is that these sports franchise games are always going to sell, no matter if their launch is plagued with issues or if the game is not playable in certain ways (looking at you, Cyberpunk). Because they always sell well to their target audience, they are always going to be raking in more money than other standalone games. This is why the FIFA series has generated a lot of revenue over the years. No information tells us how much the series has earned as a whole, but we can speculate enough by looking at the annual revenue presented here.

The EA Sports FIFA series has sold over 325 million copies since the first game.

And finally, we can take a look at some sales stats for the FIFA series in general. The series has been around since 1993 so it has had all of the time in the world to accumulate over 325 million sales, and we can only assume how much that would equate to in dollars. Based on total units sold, we can see that FIFA 18 is the most popular FIFA game to come out, and we believe that is because it came out in the heyday of the PS4 when everyone wanted to play the game to have a great time, and when IRL PvP was much more widespread.

A great game is nothing without its user base, so we are going to be taking a look at some key FIFA user stats to see where these fans are from, how old they are, etc. The FIFA series is extremely popular with the younger user demographics since the core dynamic of the game caters well to people who like to spend time with friends after school or college, like the older days in Internet clubs and whatnot. Anyway, let’s take a look!

FIFA 23 players scored 4.3 billion goals in the first 23 days of its release.

From this stat, we can see that the player engagement for the newest FIFA game (at the time of writing) is simply fantastic as players have played nearly two billion games within the first 23 days of its release. Besides this fact, we can also see that players logged an insane amount of hours into the game, although it is expressed in minutes. This makes sense as the game time tracking system most likely uses minutes in a match as the metric as opposed to hours. If the stats are this impressive at the start of the game’s lifetime, we can only expect things to keep up like this.

FIFA 22 players scored 5 billion goals within the first 22 days of its release.

Oh look, it’s the thing we just mentioned! Here we can see that FIFA 22 actually accumulated fewer core stats at its launch than FIFA 23, but they are still fairly close, warranting some amazement a how far the series has come since some of the earlier games. We can guarantee you that EA never expected to see stats like these when they released the first FIFA game, and we can also be sure that these stats are going to be overshadowed even more with every new game that comes out.

24.74% of FIFA players are from the United States.

No surprises here, the country/region with the most FIFA players is the United States. This is a common occurrence when it comes to many games today as the United States accounts for a vast majority of the gaming industry. Other than that, the games are also quite popular in the United Kingdom since football is the national sport there. The rest of the user base is spread out across the globe relatively evenly.

Although there is no official data on the age ranges of FIFA players, the data that is available tells us that the target demographic for the FIFA games is 12 to 15-year-olds, which is an ideal range for young gamers to get accustomed to the games they start playing and grow into lifetime fans. The other main demographic for the FIFA games are 16 to 21-year-olds, ideal for the type of gameplay that FIFA has.

Now it’s time to see how the last three FIFA games have performed on the Twitch scene, namely what the user engagement looks like and how many viewers they have accumulated over the years. Since the FIFA games are very competitive in nature so they make for great content! They also offer a great deal of replayability, ideal for fans who would much rather sit back and watch the games instead of having to deal with it themselves.

A good way to look at the overall success of only the last three FIFA games is to take a look at some of the stats surrounding Twitch as a whole. In a week, Twitch has around 416 million hours watched, just 11% more than what those games managed to accumulate in their short time out. These stats stand as a testament to the massive success of the FIFA series, and we can only expect things to improve as time goes on.

FIFA 23 is ranked 32nd on Twitch by average viewers.

The final line of statistics we have for you is in regard to the general position of the last three FIFA games on Twitch when it comes to viewers. Understandably, since FIFA 22 has had the time to accumulate more and more views since 2021, it is going to be performing the best out of the three games, at least until FIFA 23 has had time to marinate in the industry. We added FIFA 21 to the comparison so you can see how much games tend to fall off when their successor joins the party. Overall, the three games have had a good deal of success, something that EA should be proud of!

Alright, that would be all we have to say about the massive success of EA Sports’ FIFA series. As we said already, the FIFA series started in 1993 as a rudimentary, pixelated game that was severely limited in mechanics and its general gameplay dynamic, but it was a gem of its time and the cornerstone of the next-gen gameplay of modern FIFA games. When it comes to the modern FIFA games, it is good to mention that FIFA will be changing its name from FIFA to EA Sports FC due to some copyright issues. Although the series will continue under a new name, we have no doubts that the series will only grow in popularity and continue being the amazing series it has been since the 90s. We sincerely hope that you have enjoyed this content and that all of your questions have been answered.