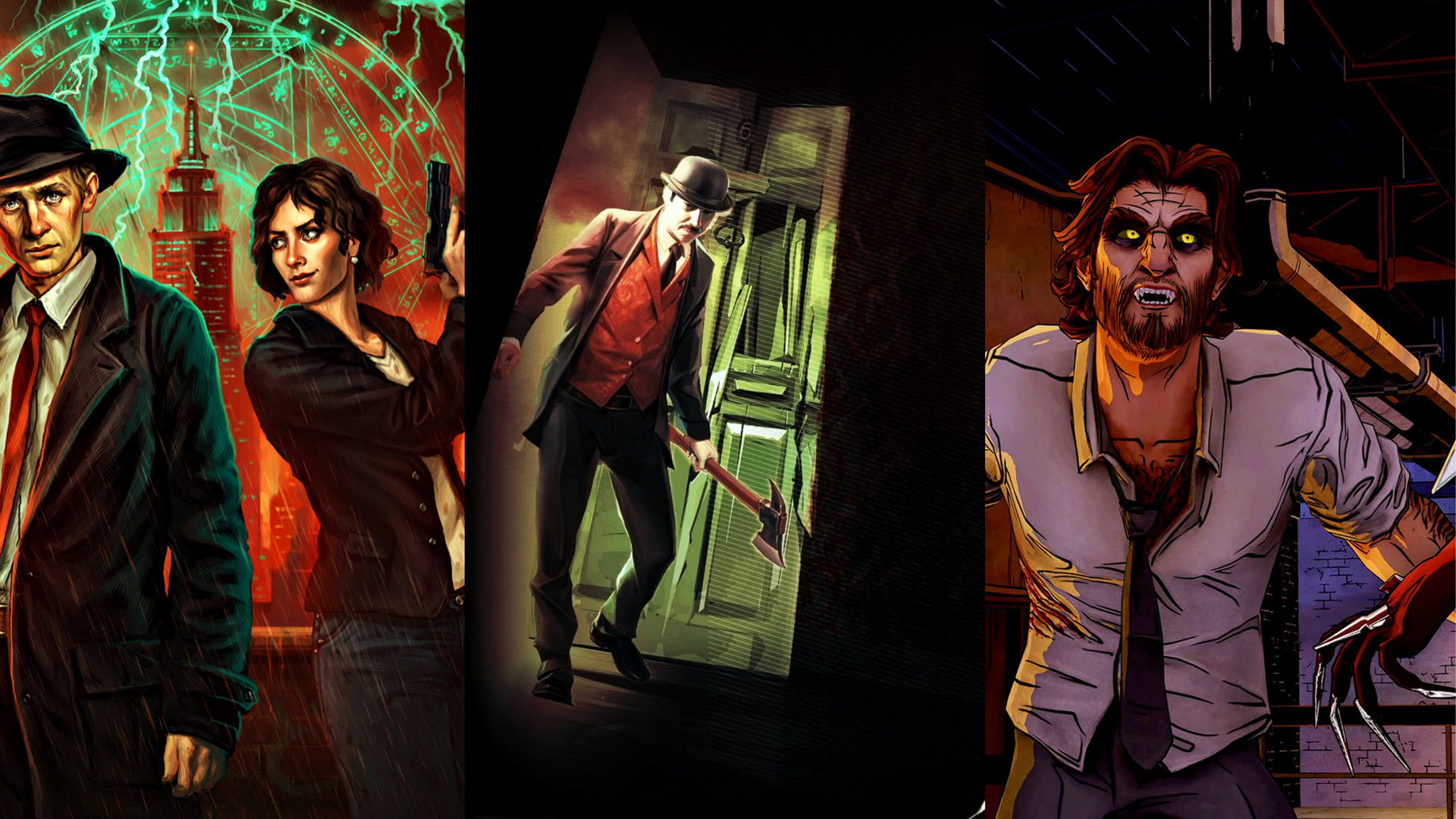 Best detective games to play in 2023

Conduct investigations in your own way in these intriguing detective games!

When you want to sit down and piece together a murder mystery to figure out who did it, you can’t go wrong with detective games. These games feature amazing, complex stories, yet keep you interested throughout the entire experience. Unfortunately, good detective games are few and far between.

Luckily for you, we’ve put together this list of the best detective games out there. They vary in theme from very simple ones where you solve a small mystery to full-scale storylines with interconnecting characters and a lot of moving parts.

If detective games are not that appealing to you, you can also take a look at some of our other popular articles such as best mobile multiplayer games and best mobile RPG games!

The Wolf Among Us

Telltale games are very well-known for, you know, telling tales. The stories that they tell are incredible and have a lot of depth to them. This game, in particular, The Wolf Among Us tells the story of fairy tale characters caught in urban fantasy, where their whimsical nature is replaced with woe, as they experience all of the problems real people face in bad neighborhoods, from drug issues to abuse. You assume the role of Bigby Wolf, the Big Bad Wolf from Little Red Riding Hood. However, contrary to what you might think, Bigby is not the bad guy, and instead is a detective and a sort of peacekeeper that makes sure everything in the fairy tale world is running smoothly. Things aren’t as smooth when someone is murdered, and Bigby has to figure out who did it. You can talk to a wide variety of characters from the most popular fairy tales and interrogate them until they give you what you want. It’s one of the best detective games that is well worth the time you invest in it.

L.A. Noire has a strong theme to it, mostly because of the nostalgic aspect of 1940s Los Angeles. You play as Cole Phelps, a detective who is way in over his head and needs to navigate the unforgiving L.A. environment where crime lurks around every corner and you can’t trust anybody. As you make your way through the story, you will encounter various people, some normal citizens making ends meet, some high-ranking mobsters who can make sure you’re never seen again if you’re not careful with your words. One of the things that make L.A. Noire special is the whole new approach to facial expressions, where you can look at someone’s face as you talk to them to gauge whether they are lying or not. This adds a lot more depth to the game, so you’re not limited to only text/tone interpretation. This is a titan among the best detective games that has a lot of replayability.

Return of the Obra Dinn

The Obra Dinn is a merchant ship that was lost at sea for a few years, only to return with its crew either missing or dead. Something that you will immediately notice about the game is its unique art style, which forgoes high-end graphics in favor of a monochrome style, so all of the emphasis is on the gameplay and the mystery. Through this, the game proves that you do not need flashy graphics to make one of the best detective games around. Your job here is to analyze the status of the ship and log everything that is out of place, to figure out what happened to the rest of the crew. Something that will help you along the way is a special pocket watch that can display the final moments of a corpse, which is invaluable information for an investigation such as this. There is a lot of things to discover in Return of the Obra Dinn, and it can truly be considered one of the best mystery/detective games out there.

Unavowed has been dubbed one of the best detective games ever made, and that is because of its clever storytelling coupled with excellent gameplay that is very immersive and satisfying. In the game, you have been possessed by a demon that commits egregious sins against humans and leaves your body afterward. You have no recollection of committing any of the murders, but still, you’re to blame and now you have nothing left of your previous life. To continue living, you join the ranks of the Unavowed, a team that is dedicated to defeating and managing everything about the supernatural in the real world. You can expect a lot of excitement to come from this game since the style is quite simple, yet incredibly well-done.

Detective work is not always about solving murders or piecing together convoluted conspiracies, sometimes it’s about using brilliant rhetoric to prove your point and help people. This is something we look for in the best detective games. In the Phoenix Wright series, you are a lawyer in a court of law who has to argue for your clients to have the best possible outcome. Scenarios are presented in a very similar way to real-life courtrooms, where you can disagree with points being made and bring up your own. The thrill of this game is finding discrepancies in what your opponents are saying, such as giving different details from before or not having their stories line up. Figuring out what is correct and what is false is the key to helping your clients avoid jail time. You’ll notice that we said that this is a trilogy, but it’s not completely true. In reality, the trilogy is a single game where all three entries of the series are included, so you can experience all of the game in one fluid session.

Disco Elysium is one of the most renowned detective games because of its near-flawless design that features an open world where you are a detective and you have the option of going anywhere on your city block to solve cases such as murders and mysteries, taking bribes and so much more. The game is presented in a top-down 3D perspective so you have a nice overlook of everything going on and can plan your moves accordingly. A robust skill system where you can forge your own path of deduction makes the game even more immersive, especially when you consider the massive role-playing interactive presence of talking to NPCs so they can give you jobs and extra information. The Final Cut version of the game is like a definitive version that includes a lot more content than the base version. Overall, one of the best detective games you can get your hands on.

Whispers of a Machine

Mystery games are cool, but giving them a Sci-Fi setting is even cooler! In this game, you play as Vera, an investigator that is augmented to have mechanical parts that help her conduct her investigations. The game is set in a dystopian world where A.I. systems reign supreme. However, not everything in the future can be perfect and idyllic, since the main driving point of the story is a string of murders that you have to solve. The more you play the game, the more convoluted and complex the story gets, making it more immersive and more challenging to complete. The presence of extremist religions and volatile individuals is something that you have to take into account since missteps can lead to mistakes and mistakes can lead to death. Whispers of a Machine is one of the best detective games that any fan of detective games should try at least once.

An excellent tale of duality and crime, The Darkside Detective is about a city that is suffering from a good deal of criminals, and some of them are supernatural. The premise is actually similar to The Dresden Files, where you have a police department that handles real-world crime, and a special investigator that handles otherworldly forces. The world in this game is mirrored, so you have the original and a dark version right below it. As you progress through the story, you’ll find that there are 10 different cases to solve, all with varying themes and characters. All of the mentioned aspects of The Darkside Detective are what we look for in the best detective games. There is a lot of content to consume, and all of it is well-packaged into a point-and-click adventure that deserves all of the rewards.

Come on, would this even be a legitimate list of the best detective games if we didn’t mention something from the realm of Sherlock Holmes? Of course not, and what better game to mention than Sherlock Holmes: Crimes and Punishments. This game allows you to utilize one of the greatest minds of mystery fiction as you journey to solve six different cases. From murder to theft, to scenarios that defy the laws of physics, you have a lot of ground to cover to solve everything. The story is immersive, which is very important in these kinds of games and it also lets you choose your own investigation path with unique skill trees that are segmented according to the classic laws of deduction. As you can see, this game offers a tremendous amount of content that will have you coming back for more.

This is a game with a lot of substance packed into one enjoyable package. Five people are drawn to a strange park where the inhabitants are strange and mysterious things keep happening around the grounds. The people that arrive to this park are actually connected through the inner workings of the story, something that you will discover as you play through the game. When it comes to the gameplay, it is a perfect balance of creepy investigation with goofy humor that eases the tension at times. You have many different locations to investigate, from haunted factories to haunted hotels, so there is a wide variety of themes, as well as scenarios to run through. Thimbleweed Park is the epitome of what the best detective games are supposed to be and it would be a shame to look over it.

We sincerely hope that your game investigation has come to an end and that you have found what you were looking for. If you’re the type that likes jumping between genres, then you might want to take a look at our best war games article, as well as our best RPG games article!