Have you ever wanted to be a king in Minecraft? With these castle designs, you can make your dream a reality! 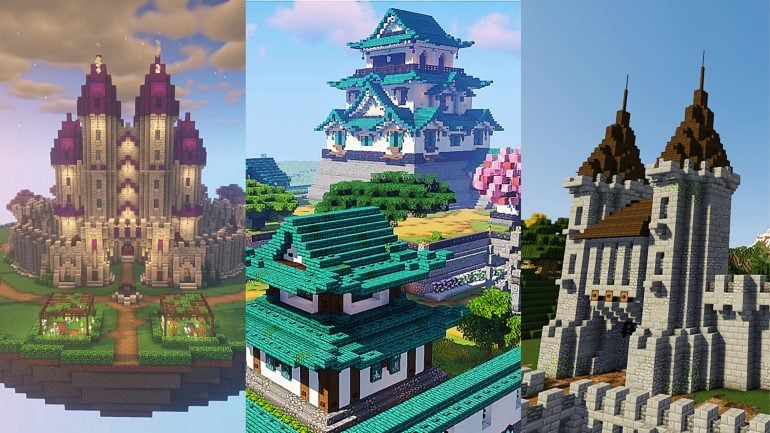 In Minecraft, you are completely free to build anything you want, from rides to castles to bases to anything else. Castles are the main topic for now and there are thousands of different castle designs that you can try out and add to your world, expanding your domain.

Many devoted Minecraft fans have come up with some amazing castle designs that make you think that it’s impossible to recreate them. We have picked out some of the best Minecraft castle ideas you can add to your world to make it a bit more special.

We love everything that has to do with building stuff in Minecraft and we always try to provide you with the most accurate information you could ask for. If you want to improve your Minecraft world even further, you can check out some of the best Minecraft modpacks, as well as the best Minecraft banner designs!

Starting strong, we have a castle that takes a decent amount of skill to build, since most of the building takes place in the sky. The appeal of this castle is that it is quite unreachable and cool to look at. The outside design of this castle includes a good deal of wood, copper, and stone, so some contrasting colors make it pop in the sky. When it comes to the interior, you have more than enough space to live a life of luxury, as well as store all of your resources!

2. Castle on the lake

Next, we have a castle that is superb when you build it on a large body of water since it has bold walls that act as a fantastic means of defense. Disregard the fact that the walls won’t really block against anything since the only things that can scale walls are spiders. Nevertheless, you will have an impenetrable fortress when you build this castle and it is great to add to an adventure-oriented server!

Most Asian architecture is extremely beautiful, with many intricate details that make it stand out in contrast to other buildings around the world. As a homage to this, BlueBits created this design that presents an incredibly cool castle with tons of details. It’s a massive fortress with many rooms so you can organize all of your things, but many decorations make it an absolute pleasure to look at.

Castles that have a darker aesthetic are always very cool, and this design stands out from all the rest. It has a ton of free space to walk around in the middle, with enough room for anything you might need, and it’s all made even better by the four pillars that make up a large part of the structure. If you have the time to mine Blackstone, you should try out this design!

Next, we have a very large castle design that is quite practical if you were to use it in a real medieval setting, complete with fortified walls, a place for your horses, storage, extra rooms, and even a wizard tower if you want to make it into an enchantment room. The more complex Minecraft castle ideas are always awesome to see, no matter the theme of the world in question.

Towers are cool and all, but what is better than a big tower? An even BIGGER tower! When you build four giant towers and add some walls to make a castle, it is bound to look badass and very appealing. Each of the towers can be hollowed out to include even more space, and the structure in the middle is perfect for anyone looking for a good castle design.

Most of the time when you think of a castle, you’re going to be thinking about a giant grey structure that has some towers, battlements, baileys, and a few more things that make it convenient and strategic. This design has a fantastic, rustic feel to it, so when you build it in your world, you can feel like a king. There is plenty of space to store all of your resources, as well as manage everything according to your tastes. The best Minecraft castles do not need to be overly complicated!

If you’re running a medieval-themed world, it is often a great idea to include some broken-down castles to indicate some sort of battle that happened there before. It adds flavor, and depth, and is a generally nice thing to see, no matter what. These ruins can be customized, of course, and you can stash some goodies inside so players who play with you can explore a bit and get a bit richer!

We’ve mentioned the Blackstone castle, and now we have a beefy version of it. The first thing you’re going to notice about this one is that it is massive, large enough for multiple people to live in it at a time. Other than that, we also have a great amount of detail added to this one, so once you finish building it, you can look at it with pride! Definitely one of the best Minecraft castle ideas around.

And finally, we have one of the best and biggest Minecraft castles you can get your hands on. This massive castle isn’t just one structure, but instead, it also has a village attached to it, so you can even consider it a sort of fiefdom. There are many rooms with plenty of space to store everything you have, as well as enough space to basically do whatever you want.

With that, we conclude our list of the best Minecraft castle ideas you can incorporate into your world immediately! Playing Minecraft and coming up with these massive builds is fantastic, but if you want a break from the game, consider checking out the best naval games, best horse games, and the best war games!