Are you looking to add some freshness and magic to your Minecraft world? Here are some of the best Minecraft magic mods! 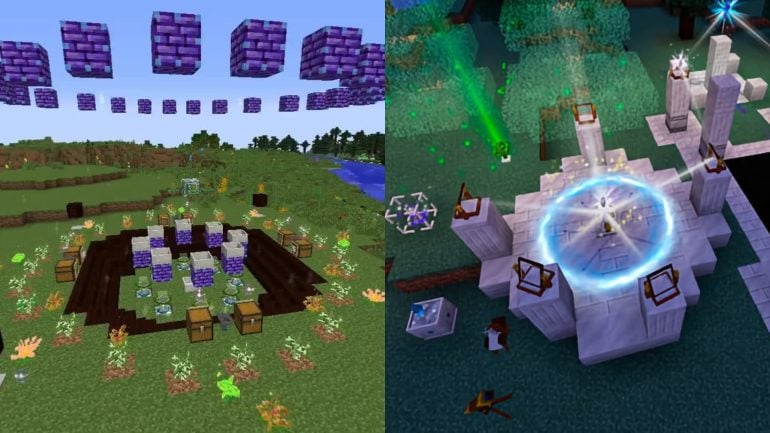 Magic is a very common topic when it comes to many things in life, and since it is so popular, it has also made its way into Minecraft as well. Although Minecraft has its own magic system expressed through potions and enchanting, you can’t help but to wish there was a bit more to it.

To this end, you can always consider installing some of the best Minecraft magic mods to add some charm to your game. We’ve prepared a list of mods we know you’ll like because they range in theme with many different types of magic so there is something for everyone!

Minecraft mods are always awesome when you want to change the way the game works and regain the sense of wonder when you’re playing it for the first time, but what if you don’t want to do that? Well, you can always take on some challenging builds, so you might want to take a look at the best Minecraft Nether bases and the best Minecraft temple ideas!

The first mod we have for you is a great take on mixing different themes, and Botania mixed technology with natural magic, allowing you to craft complex machines using only the power of natural energy. The way you discover things in Botania is by consulting the Lexica Botania, the book you get when you just start playing. It gives you all of the information you need to get started. Overall, it’s one of the best Minecraft magic mods because it brings something new and innovative to the table.

This mod is not a complete overhaul of the base dynamic of the game. It, instead, introduces a new mechanic that helps you to orient yourself in your world and remove the stress of wandering around after you lose your way. The way these stones work is that you craft them and place them on the ground, after which you can either travel between previously placed stones or you can use special items to warp yourself to the stones in seconds. Definitely one of the best Minecraft magic mods for orientation.

Other mods we’re going to mention tend to be quite relaxed and easygoing, but Blood Magic takes a step in the other direction. With this mod, you constantly have an element of risk attached to everything you do, so you have to always be careful. The way you use magic in this mod is that you collect Demon Will to construct an altar, and you just go from there. Overall, this is one of the best Minecraft magic mods that add some gruesome content!

Astral Sorcery utilizes the power of the stars to give you power, a fascinating power dynamic and magic theme. The way it works is similar to Botanica where you have a journal to track the constellations in the sky as well as the occurrence of starlight around the world. There are a lot of factors that go into making this one of the best Minecraft magic mods, and you’ll see the brunt of it once you get into the game!

Thaumcraft is one of the best Minecraft magic mods by sheer popularity, mostly because it is a classic take on magic and magicians in general. Instead of grand designs and technology, you instead create the magic from your wand by manipulating matter and transforming things from one state to the other. It is jam-packed with content, spells, features, and new items for you to discover, and it’s a fantastic experience. Check it out!

Now we come to a mod that takes inspiration from the dread writings of H.P. Lovecraft, using magic born of elder gods and whatnot. The mod adds extra spooky biomes along with fitting mobs, as well as a lot of items that serve as help for rituals and solving some of the problems presented in the mod. All of the information you need about AbyssalCraft is provided by the Necronomicon, which can be crafted using Rotten Flesh, a Book, and some Iron.

It’s pretty hard to make a list of the best Minecraft magic mods without mentioning dragons in some respect. These mythical creatures inhabit a massive section of fiction, and why not add them to a Minecraft mod? This mod adds fire and ice dragons on top of some other mythological creatures from hippogriffs to fairies. It introduces new mechanics of dragon taming and dragon equipment, which you can use to survive in the world. Overall, it’s one of the best Minecraft magic mods because it concerns itself with classic magic themes.

Reliquary Reincarnations adds many legendary relics to the game that you can find as you play. All of these items have magical properties and benefit the player in different ways, depending on what you need. From guns to item teleportation, you can expect a variety of new things to discover when you start playing with this mod!

Some people like innovation or new items when it comes to the best Minecraft magic mods, while others like to live on the edge, fighting for their lives all the time. This mod is perfect for that because it adds dozens of new mobs from all corners of fiction. Some are deadly, while others are harmless, but all of them have amazing animations, smart AI, and envious graphical design that makes them extremely satisfying to see in your world!

The final mod we have for you is another nature magic-oriented mod, but this one doesn’t focus on utilizing nature magic to augment technology. Instead, this one focuses exclusively on druid magic that can help you throughout your playthrough. It features new mobs, items, offensive/defensive spells, and much more. There is a tremendous amount of content in this mod and we recommend you get started right now so you can get in tune with one of the best Minecraft magic mods!

That’s all we have to say about the best Minecraft magic mods! These are amazing in every regard because they concern themselves with different themes from fantasy and magic in general. We sincerely hope that you have found what you were looking for! If you’re ever looking for a break from Minecraft, you should take a look at the best war games, best free PC games, and the best tank games!