Check out these epic Minecraft anime texture packs if you're a fan of anime and want to enjoy it in Minecraft! 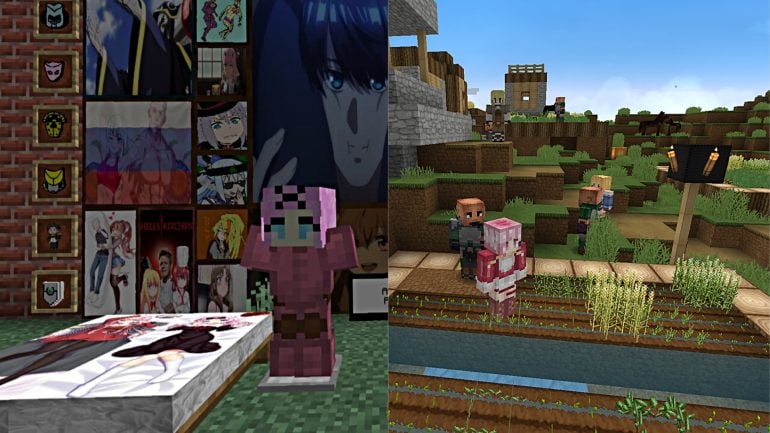 Anime is a very popular sphere of entertainment that has reached global popularity over the years. Since they are so popular, the production quality has also drastically improved, leading to some amazing animations that are very intense. Minecraft is a game that has also taken after anime in some respects, and we’re going to be talking about anime texture packs today.

To help you spice up your Minecraft world, we will list some of the best Minecraft anime texture packs. These packs are awesome if you’re a fan of anime and the art style, and they are a great way of changing up the way the game looks!

Demon Slayer has quickly gained global popularity as one of the best anime series because its story is amazing and the animation quality is some of the best we’ve seen in years. The show has a very distinct arty style that appeals to many fans worldwide, and this texture pack encompasses everything that makes Demon Slayer what it is.

Something that has made the Internet more enjoyable is the appearance of memes. Anime memes are in a genre of their own and can be pretty funny when you get the references. This texture pack takes the best of the best anime memes and changes the textures around them. Since anime is such a popular topic, this pack is always getting updated to include all of the best memes.

Fairly Tail is another popular anime series that has a notable fantasy element to it. The story is set in a fantasy world where wizards come together to complete bounties and contracts, and the main character is looking for their father. We highly recommend this anime texture pack if you’re a fan of Fairy Tail and want to make your game more magical.

Now we have a texture pack that takes all of its elements from Attack on Titan, as the name implies. The world of Attack on Titan has some medieval connotations about it and the story is very gripping and horrifying in certain parts. This texture pack is amazingly done so you can expect it to be very faithful to the viral series.

One of the best anime plots ever, My Hero Academia is full of memorable characters that are just kids thrust into a world of crime and death, and they have to adapt to it and get on top. The main theme of the anime is superheroes and their antics. All of the new textures in this pack reflect the awesome world of My Hero Academia, and if you’re a fan of the series, we highly recommend you try it out!

As one of the most popular anime series of all time, you can bet everything you have that Naruto will have its own texture pack in Minecraft. It has some of the most popular characters out of any anime series. All of the tenets of being a skilled ninja have been replicated in this texture pack and you should absolutely check this out if you’re a fan of Naruto and ninjas in general.

Sword Art Online has a very interesting isekai premise where the main character is pulled into a world of virtual reality where they have to level up and complete raids. The main character is unique and badass, just like most of the scenes in the anime. Since the series is heavily focused on combat and weapons, you’re going to love the way the Minecraft weapons have been redesigned!

Everyone knows about Dragon Ball Z. It’s been around since the nineties and has been a cultural staple for years and years. This texture pack takes all of the best aspects of the show to massively improve some of the textures in the base game, and it makes you feel like a Saiyan. We highly recommend this texture pack if you’re a fan of Dragon Ball Z and want to add it to your world!

One Piece is one of the longest-running anime series of all time, racking up over 1000 episodes of action-packed pirate antics that grow more addictive the longer you watch it. This awesome texture pack makes it feel like you’re in the world of One Piece, looking for devil fruits and getting into grand ship battles.

This texture pack isn’t strictly inspired by an anime series but is instead focused on hyper-realism and making ray tracing videos. All of the textures of the base game have been changed to resemble the building materials that might be used in building a simple Japanese town. Of course, you can use this pack for any build you might have so it looks a bit better, but it is much better for featured videos!

And there you have it! All of the best Minecraft anime texture packs that you can use to drastically change the way your world looks. We love Minecraft, but if you’re looking to take a break from the game and play something else, take a look at the best war games, best naval games, and the best tank games!