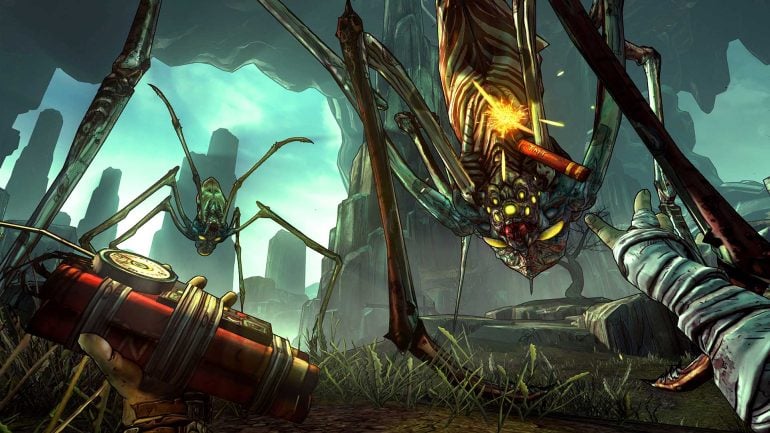 So you’re still looking for that next Borderlands fix huh? Well good news. Borderlands 2 has 10 different DLC packs – 5 campaign story packs and 5 shorter Headhunter packs – to keep you going. This 2021 list is a guide to everything you’ll want to get started.

What level should I be for Borderlands 2 DLC?

The campaign difficulty of Borderlands 2 DLC will depend on what level you are and on what mode you’re playing – Normal mode or True Vault Hunter Mode (TVHM).

Once you start a BL2 DLC it will stay at that level. So make sure you really want to do that DLC when you begin it. Level requirements in the game are there purposely to keep you in touch with the main story line and know what the hell is going on.

Though not absolutely required, we suggest you finish the main game before moving on to the DLC. Also it’s best to play them in the order they were released.

How long is the Borderlands 2 DLC?

It depends. Altogether if you’re looking at around 20 hours of extra gameplay from just doing the story missions of the campaign packs.

Add another hour for each of the 5 headhunter packs and you’re looking at a solid 25 hours of more Borderlands 2 glory. If you go full completionist mode and want to get the absolute most out the Borderlands 2 DLC packs then you can spend upwards of 12 hours on one of them alone!

Also when you’re finished with the BL2’s DLCs you can also have yourself some fun with Gibbed codes and a Save Editor.

Where can I get Borderlands 2 DLC?

Xbox and PlayStation users can get all the Borderlands 2 DLC from their respective stores. Keep an eye out for sales if you’re not in a hurry.

Then get the Borderlands 2: Game of The Year edition bundle on Steam. You will get 7 of the 8 DLC packs at once and save a bunch of money at the same time. Even if you already have the base game it’s better than getting them all separately. BTW, it’s the latest DLC, Commander Lilith & The Fight For Sanctuary, that has to be bought separately.

Also, if you got the setup for it, we recommend getting the free ultra HD texture pack while you’re at it. Mmmmmm. Free BL2 4K remaster.

Captain Scarlett and Her Pirate’s Booty

Captain Scarlett and Her Pirate’s Booty was the first DLC pack to be released. It came out way back on October 16, 2012, a month after the game’s official launch.

The DLC takes an interesting detour away from Borderlands 2 with a pirate theme… somehow without any water in the game. As the name implies, the DLC revolves around Captain Scarlett. A backstabbing pirate that’s on the hunt for a treasure to which she has only half the pieces needed to find it. That’s where you, as a Vault Hunter, come in.

After you finish the”My First Gun” mission in Windshear Waste, Oasis, the starting location of the DLC, will show up for fast travel. There are four story missions and six optional missions. Three new enemy types are also added: pirates, stalkers, and sand worms. You’re looking at about 4 hours for the main story and another 3 hours for the side missions. Altogether you’re look at 12 hours absolutely everything the DLC has to offer.

Released on November 20, 2012, Mr. Torgue’s Campaign of Carnage is the second DLC pack.

Mr. Torgue invites you to a once in a lifetime (heh) opportunity to fight at a tournament arena. This Hulk Hogan looking fellow is the head of Torgue, a weapons manufacturer, and wants to see if you’ve got the stuff to be champ.

You gotta complete “My First Gun” mission in Windshear Waste first. After you do, the Badass Crater of Badassitude location can be fast traveled. There’s 40 missions in total: 15 story missions and 25 side missions. There’s plenty of new enemies and a bunch of bosses. You need about 3 hours to finish the main campaign. Add another three hours to that if you’re a completionist doing all the side missions and arena challenges.

A whole new continent called Aegrus is now open to you to find a Hyperion ship said to tons of loot. It has an interesting safari theme swamp vibe to it – and filled to the brim a ton of new interesting enemies.

You really should complete the main storyline of Borderlands 2 before embarking on this one so that you fully understand what’s going. This isn’t required though.

The DLC has five main missions and twelve optional missions.

Plus you’ll get a new vehicle – a fan boat. Equipped with a machine gun and your choice between corrosive launcher, flamethrower, or shock launcher. Plus you can pimp your ride with your choice of 69 different skins.

In this DLC, you can sink about 4 hours for the main missions, 7 for the side missions, and around 9 for doing everything possible.

The fourth story DLC pack, is Tiny Tina’s Assault on Dragon Keep. This came out on June 25, 2013 around 10 months after the official release of Borderlands 2.

It’s been described as a “game within a game” and with good reason. Tiny Tina acts as the Bunker Master in “Bunkers and Badasses”, a homage to the classic table top role-playing game Dungeons and Dragons.

As you progress though the DLC she will alter the world according to how the story flows, changing where locations and which characters and bosses show up.

Another neat feature is the Dice Chest that has up to two twenty sided dice that you can roll. The higher the roll the more rare the loot inside. The first roll is free for the second roll you have to fork up 5 Eridium rolls.

To begin the DLC, open up your map and go to the Unassuming Docks by fast travel.

There’s 31 missions in total with four of them being story missions. Sounds like a small amount, but you’ll be getting 6 hours out them. Around 9 hours for all the missions. 11 hours for absolutely everything possible.

Commander Lilith & The Fight For Sanctuary

The last and most likely final DLC pack to come out for Borderlands 2 is Commander Lilith & The Fight For Sanctuary. It dropped on June 9, 2019 almost 6 years after the previous DLC to hype up the release of Borderlands 3.

This time, Colonel Hector, ex leader of a Dahl battalion, has taken over the city of Sanctuary and gotten a hold of the Vault Key. Now wants to release a gas and all of Pandora. It’s up to you to stop him.

How to use Borderlands 2 Gibbed codes

With this DLC you can make a new character that’s immediately boosted to level 30. Letting you not only immediately play this one, but rest of them too if you haven’t reached level 30 in the game yet. It also increases the overall level cap to 80.

It’s the only DLC that’s not available on the Xbox 360 and PlayStation 3. It’s also unique in that it goes up to level 38 for both normal mode and TVHM. Also for the first time ever a new weapon rarity level is introduced. Scoot over Pearlescent. We now have a new Effervescent rarity to drool over.

It was initially offered for free. Sadly that’s not the case anymore. There’s 20 missions. 7 story ones and 13 side missions. You can expect a 3 hour story ride with this one. The shortest of all DLCs. With the extras around 6 hours.

There’s also a secret boss called Clark the Combusted Cryptkeeper, but he’s gotta be summoned. We’ll leave that unspoiled and up to you to find out how. You get a story mission and a side mission.

The Horrible Hunger of the Ravenous Wattle Gobbler

Ever seen a giant killer turkey? NO? Well you will. Released on November 26, 2013, The Horrible Hunger of the Ravenous Wattle Gobbler is the second hunter pack.

This one’s got a Thanksgiving vibe. Complete with a sweet old granny named Grandma Flexington – Mr. Torgue’s grandmother. That turkey we mentioned? It was a marketing plan to promote Torgue corporation gone wrong. Now it’s your responsibility to end it.

This pack is likewise short, but sweet with a story and side mission each. Fast travel to Gluttony Gulch to begin it.

How Marcus Saved Mercenary Day came out on December 17, 2013.You guessed it: it’s Christmas time.And time find out where Marcus’ missing gun shipment is of course.

A word about snowmen… you won’t be building them. Instead you will be encountering them as new enemies exclusive to Frost Bottom. Fast travel to Marcus’s Mercenary Shop within Frost Bottom to get started.

Mad Moxxi and the Wedding Day Massacre arrived on February 11, 2014 just in time for Valentine’s Day.

So a family member of the Hodunk clan and of the Zaford clan, bitter rivals, will be getting married with the goal of peace and harmony being made between the clans. As the name implies, things aren’t looking so bright. Mad Moxxi wants you to find the ingredients to mix up a love potion to fix things. Fast travel the Rogut Distillery to get this disaster of a show going.

Sir Hammerlock vs. the Son of Crawmerax

Like Tremors or Dune? Well then you’ll like Sir Hammerlock vs. the Son of Crawmerax. Why? Because it’s got a giant freaky water worm and lobster hybrid looking thing of course.

Rescue Sir Hammerlock from him and you’ll be nicely rewarded. It was revealed on April 15th 2014 and is the last headhunter pack.