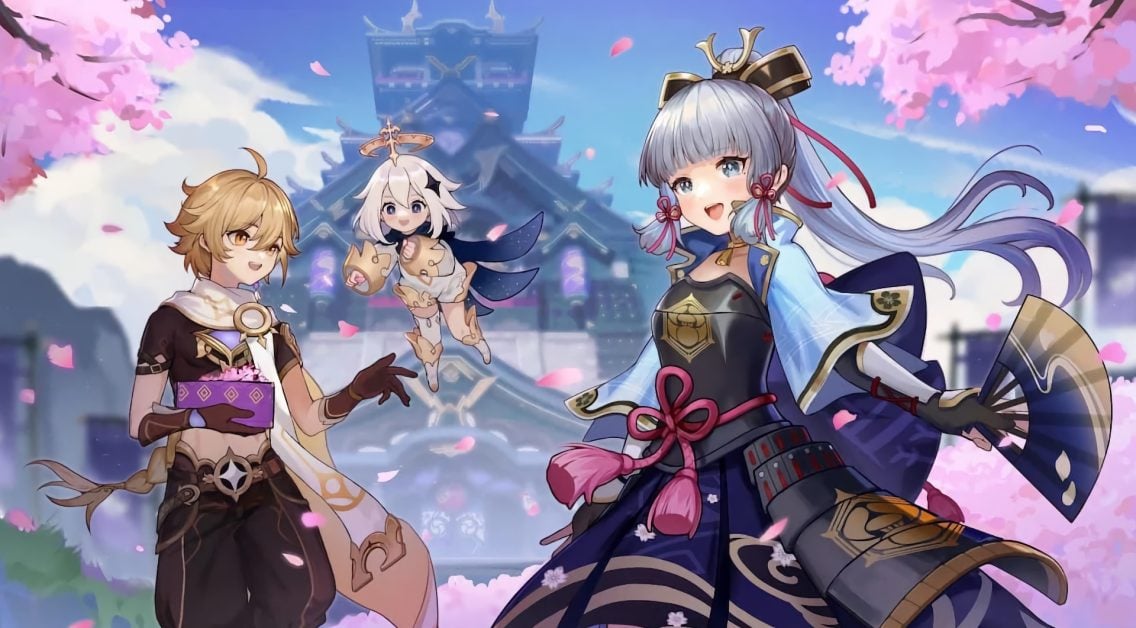 Genshin Impact is an action role-playing game released in September 2020 and developed by the Tencent-owned Chinese studio miHoYo. The game can be played solo or with comrades. But an Internet connection is needed, even when playing all by yourself. It is free-to-play, but transactions and in-game purchases can be made.

Genshin Impact comes with a real story, full of intricacies and rich lore. It starts with a pair of twins, with the ability to travel across worlds, who just arrived in the land of Teyvat. Unfortunately, the situation is dire as they end up in the middle of a violent conflict. While trying to run away, an unknown God seals one of the twins and kidnaps the other. Five hundred years later, when the sealed twin (nicknamed The Traveler) is finally released, they encounter the small Paimon. Both decide to search the land, hoping to find the long-lost twin. This adventure will, in fact, throw The Traveler at the core of Teyvat’s state of affairs. The gender of the main character is decided by the player at the beginning of the game.

With its vast open world, colorful and vibrant environment, smooth gameplay, incredible soundtrack, and appealing anime style, Genshin Impact checked all the cases to create massive success. And the veteran that is miHoYo clearly knew how to exploit all those elements. When it was first unveiled, the game had to endure the harsh words of gamers who called it a copycat of Zelda: Breath of the Wild. It quickly appeared that it was not the case. Genshin Impact allows you to control four different characters by rapidly switching between them. With each character controlling a specific elemental force, it is possible to create combos with devastating effects. The world of Teyvat can be explored in different ways as the player can jump, swim, glide or climb. Several quests can be done, and new ones appear after reaching a certain Adventurer Rank and through updates.

All that said let’s just see how successful Genshin Impact has been with the latest Genshin Impact statistics and facts. Besides this, if you want to learn more about our video games industry statistics then this piece will provide you with some great insight.

Players in Genshin Impact are usually active members of two communities: anime/manga and JRPG. Both can actually go hand in hand. It is not that it is just them playing the game, but there is a good chance that a good chunk of players belongs to those two worlds. And why not? With its charming atmosphere and anime graphics mixed with real-world cultural elements, Genshin Impact allowed players to live the adventures they would see in anime/manga themselves.

The gender ratio in the community is really balanced, signaling a product that has managed to mix elements that would suit everyone. Therefore, expanding its reach. The average age might be higher than one would have thought. Still, when you consider that the average age for gamers globally is 32-33 and that “otaku” culture in foreign countries started in the 80s, you will understand that it is not that surprising. All in all, Genshin Impact is appealing to young adults. Plus, the founders of miHoYo themselves are around that age, and like their motto says, “otaku are here to save the tech world”! Other than that, we notice that players are also really invested in the game, motivated by the RPG format Genshin Impact has adopted.

2. Genshin Impact has been downloaded more than 85 million times on mobile devices.

When keeping in mind that the game was violently compared to Zelda: Breath of the Wild by Chinese and western players, the direction its popularity took is simply astonishing. But maybe the game actually did benefit from that comparison, fascinating the curiosity of many gamers. The number of pre-registrations originating from outside is quite significant for a purely original Chinese game going international right from the start. Before all the reviews were out, word-of-mouth did the trick, spreading like wildfire, and the game did not even need a whole week to start breaking records and expectations.

3. Genshin Impact has made a total of $2.1 billion on mobile devices in its first year.

We can see here the smashing success of Genshin Impact right from release day: the game had been out for less than 3 days, but it still managed to amass more than $10 million before the end of its launch month. Besides that, miHoYo is steady in its earnings, always crossing the tens of million threshold. The monetization system uses the gacha mechanics, which is widely accepted in China. Still, it has to prove itself in the West (even if we keep seeing it used way more often in MMO games). However, it is pretty well implemented in Genshin Impact. The title has different currencies that can be earned in-game or bought in the store in order to purchase unique items or pull gacha. There is also a Battle Pass that gives access to many extra items. It can be renewed after 40 days, and the Monthly Card will offer 300 gems upfront and a certain number of Primogems over a month. Of course, here again, the biggest worry is people developing a gambling addiction because of the gacha mechanics.

Genshin Impact has certainly been recognized by the western gaming industry. It

even won the TGS Media Awards Public Poll in Japan before its release. It is a shame its soundtrack is not acknowledged more often, considering how seriously they tackled it. The game is way more popular on iPhone, where it generated bigger numbers in revenues and downloads.

Time to take a closer look at how the community consumes the game. And the open world of Teyvat has a lot to offer to all curious adventurers. With 46 different characters, seven major nations (not all available for now as miHoYo follows a ‘one year, one region’ roadmap), particular domains like the Abyss, and many subquests, Genshin Impact is a treasure trove for gamers.

The countries used are where the game has been downloaded the most. Indonesia is even the country where it is the most popular on Google Store. Clearly, the game did not really lose any steam, as it is still making enough money through in-app purchases to be in the top 5. It can even boast about still being actively downloaded.

6. On iOS US, Genshin Impact ranks 14th on iPhone and 5th on iPad in the Top Free RPG Games category.

iOS being the go-to platform for most mobile device players, the numbers are not too surprising. The United States is where the game has been downloaded the most (minus China since Sensor Tower cannot track their numbers). The game is also ranking better on iPad, but then, for a gorgeous game like Genshin Impact that places a lot of emphasis on visuals, it is normal for users to seek a bigger screen.

Genshin Impact scores a good rank considering that it still managed to appear amongst all those MMO titans. Most of the time, the streams that are the most interesting to people are the ones where they get to see their streamer in front of other players. Plus, streaming an RPG is not always easy, considering that you will grind and do a lot of stuff that has nothing to do with the main story. It speaks volumes that it still has a good rank on Twitch and found its public on there too.

8. Kazuha is considered to be the best fit to finish the Spiral Abyss domain as he was used 96.1%.

The Spiral Abyss is a special domain with extra challenges and bosses, and it has 12 floors (and more to come in future updates). Think of it as the equivalent of those post-game dungeons in RPGs that are unlocked in specific ways and have 100 floors with the hardest enemies. The data here was acquired through a sample of over 10,000 players who perfectly finished the domain, with all stars earned. Fun fact: Zhongli was a really hated character when it was first introduced, as it lacked balance and good points. Chinese players even took offense, seeing as the character is clearly representing their country, but was the worst in the whole roster.

Except if stated otherwise, keep in mind that most of those numbers refer to the app on mobile devices. For some reason or the other, miHoYo did not reveal the numbers coming from PC and Playstation. And those are difficult to track for third parties, contrary to content on mobile. But what it also tells us is that once the player bases on PC, Playstation consoles, and third-party Android devices (widely used in China after its kerfuffle with Google) are added, those numbers must simply go through the roof and reach the Moon.

That global domination is understandable, though. The production value behind Genshin Impact is fantastic and professional. The title could be an AAA game, but totally free to play and not being sold at $60 minimum, with DLCs coming out each month. The graphics are gorgeously vivid with a cel-shading effect suiting the anime vibe perfectly; the soundtrack is beautiful with the compositor working with three different philharmonic orchestras; the environments follow a harmony based on their respective element and lore; the gameplay is intuitive and easy to understand; the story is compelling, and the lore is vast and full of surprises with inspirations taken from Chinese culture. Plus, the game is cross-play across all the platforms and cross-save between PC and mobile devices. What is there to not love? Except if you are not into anime/manga and JRPG at all…

That huge fame found abroad can only be seen as a blessing for the company. Indeed, the ruthless new laws enforced by the Chinese government limiting the number of hours and the days young people can actually spend playing video games are hurting Chinese developers. With a roadmap planned until at least 2025 and a group of developers who seem to know what the people want (most of the time), miHoYo is surely not done yet with the world of Teyvat.