How to play Pensacola in World of Warships

The Pensacola is a polarizing ship in the World of Warships community—some love it; others hate it with a passion. Here's how you can get the most out of this peculiar heavy cruiser. 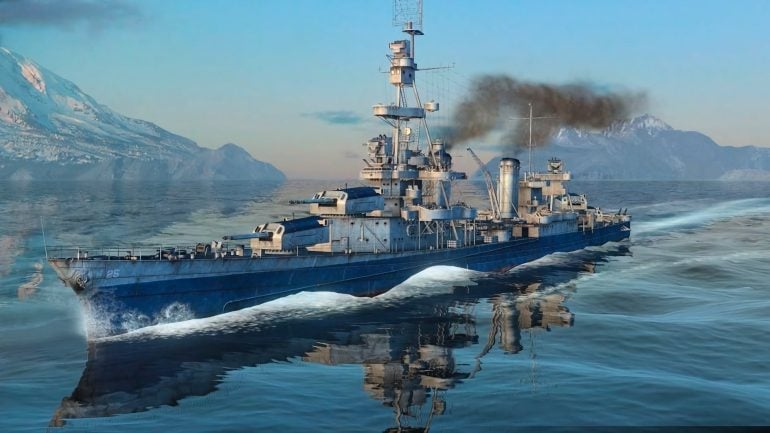 The Pensacola is the first US heavy cruiser in World of Warships, and it’s known for causing frustration for many captains. Many people curse the Pensacola and advise using your free XP to skip right past it. Others, however, swear by it, and we’ll get into why down below.

We’ve got tips and tricks that will help you get accustomed to this unique battleship. When you’re done here, you’ll know exactly how to play Pensacola in World of Warships. Also, spend a few minutes to check out our list of World of Warships code redeem awesome loot, cosmetics, and other great prizes for your World of Warships account.

What makes the Pensacola so hard to play?

The difficulty with the Pensacola lies in how thin its plating is relative to other ships in its tier and class. The ship’s flimsy armor reduces the effectiveness of angling maneuvers, which many captains (especially newer ones) rely on to squeak out of sticky situations.

The rotten cherry on top is how big and vulnerable the ship’s citadel is. In fact, some players call the Pensacola the “full-body citadel,” due to how easy it is to citadel.

Why some players love the Pensacola

The Pensacola is notoriously thin-skinned compared to its peers, so why do some players love this ship so much? The answer is simple: the Pensacola’s guns are incredibly powerful .

The Pensacola is the textbook definition of “glass cannon.” It can absolutely rock enemy battleships but will fall apart at the slightest knock. To get the most out of this ship, you’ll have to make adjustments to the way you play.

Tips & tricks to master the Pensacola

The kinds of adjustments we’re talking about might require a total overhaul in the way you look at the map and positioning. Here are a few tips and tricks that will help you understand how this underrated heavy cruiser is best played:

Take advantage of cover and concealment!

First and foremost, the Pensacola is a stealth bomber in disguise. When fully specced, it has a concealment of 10.9 kilometers. This means that, unlike other heavy cruisers like the Cleveland, you don’t want to jump into battles (in fact, the Pensacola’s lack of torpedoes guarantees you’ll be sleeping with the fishes if you engage at close range). Instead, use your concealment and cover to land carefully targeted shots from no closer than 9 kilometers.

The idea is to sit just within detection range, fire at any priority targets, then disappear from vision during your reload.

We just want to emphasize just how flimsy the Pensacola is. If you’re not under cover or concealed, start moving to somewhere that is. Luckily, the Pensacola is pretty agile for a heavy cruiser, and you should be able to escape to safety if you spot any incoming threats early.

Pay close attention to BBs that have recently fired

The Pensacola is a fragile ship but its arsenal can be devastating in the right hands. BBs in particular are perfect targets for a seasoned Pensacola captain, but it takes situational awareness and an intimate understanding of the lay of the land.

How to leave a Division in World of Warships

Focus on where the enemy BBs are located and when they’ve fired. You have a catapult fighter at your disposal, so use it to scout out the enemy. Once you have one in your sights, use your concealment to get within effective range, using nearby islands to keep your approach hidden. Then, lob shells at the unsuspecting BBs right as they’re reloading.

Use your Armor-Piercing Shells

You get access to American superheavy SP shells right around the time you unlock the Pensacola. These AP shells can overcome bounce at sharper angles than most other AP types in the game, so use them to surprise enemies.

Stagger your hydro and your fighter

The Pensacola can equip a Catapult Fighter and Hydroacoustic Search. Both of these will be invaluable for spotting torpedoes. For the most effective cover, stagger the hydro and the fighter, so you’ll always have a way to detect incoming fire.

Another crucial hurdle to overcome is how you perceive death in World of Warships—in the Pensacola, death is inevitable; it’s about taking as many people down with you as possible.

We hope you find the information and tips covered in this guide useful. The Pensacola certainly isn’t a ship for everyone, and we’d forgive you for wanting to go back and grind out free XP with the Cleveland until you have enough to blow right past the Pensacola. Still, if you stick with it and use the suggestions outlined in this article, we’re certain you’ll at least get some understanding of why some players love the Pensacola so darn much!