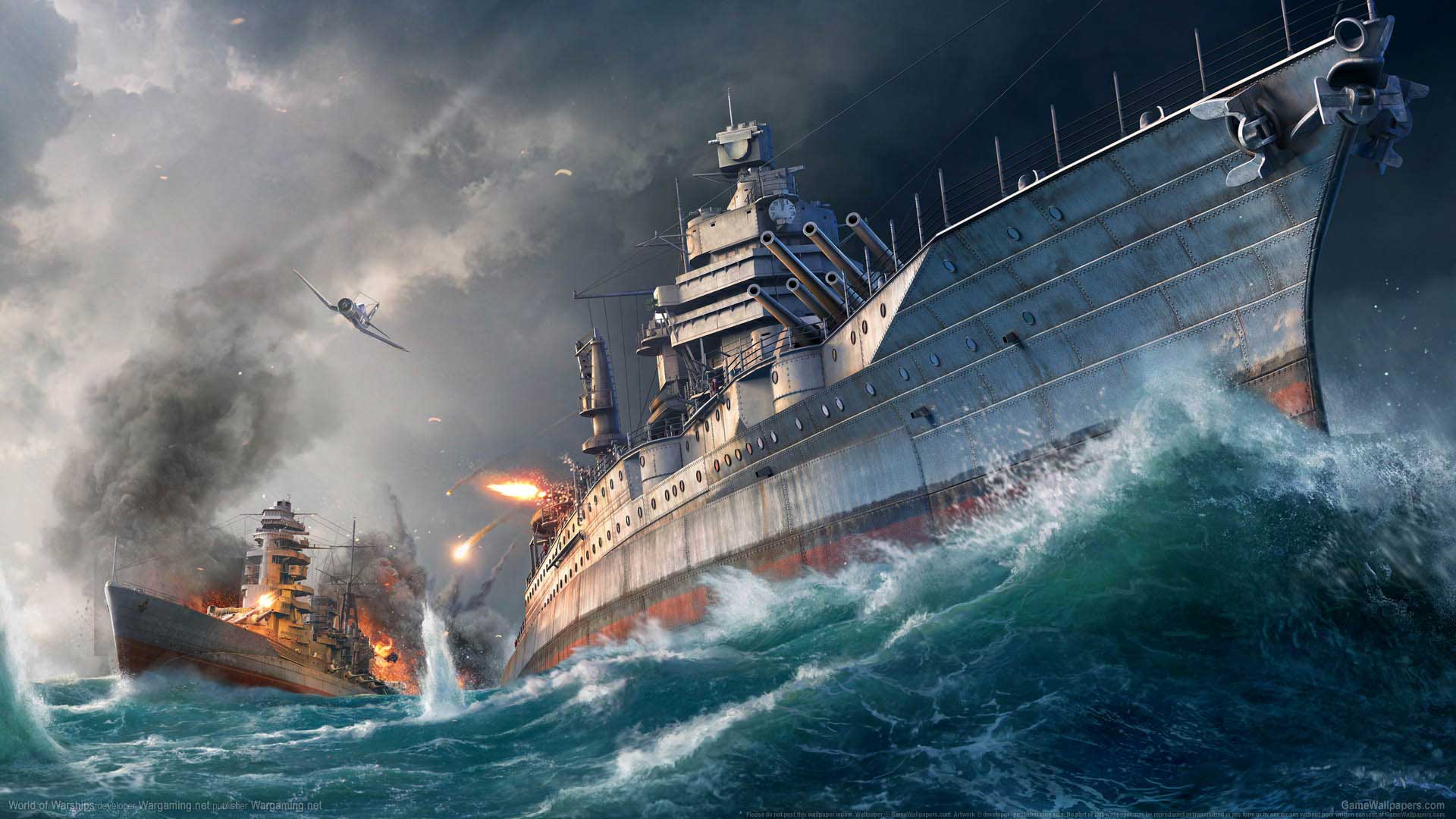 World of Warships review: Is it worth playing in 2023?

The history, gameplay and future of Wargaming's naval combat MMO.

After successfully dominating the land and skies with World of Tanks and World of Warplanes, developer Wargaming set their sights on the open seas. World of Warships officially launched in 2015, bringing Wargaming’s unique brand of semi-historical machine combat to naval warfare.

It didn’t take long for me to realize that World of Warships was a completely different experience from Tanks and Warplanes. World of Tanks lets players duke it out in varied environments where object placement and terrain have tactical value. World of Warplanes puts you in the cockpit of a metal bird flying through the skies at hundreds of miles an hour. But in World of Warships, there’s nothing standing between you and a torpedo. You’re a lumbering, floating hunk of metal with an explosive payload and maybe a few inches of armor.

If you’re looking for a realistic simulation of naval combat, you’re going to be sorely disappointed. World of Warships continues Wargaming’s tradition of translating the complex controls of a massive war machine to a simple keyboard and mouse layout. World of Warships doesn’t attempt to translate the intricacies of maneuvering a warship to 101 keys or less. Instead, its depth can be found in its cerebral, team-based combat.

The Warships in World of Warships are slow and ponderous, and weapons take forever to fire and even longer to reload. Players engage in cross-play long-range warfare with kilometers of empty space between them. A single millimeter can spell the difference between a direct hit and an expensive dud.

With such little room for error, every movement and action must be deliberate and planned. Circling around a small island to put your ship in position for a straight flanking shot isn’t just effective, you get literally dozens of seconds to unleash hell on their exposed side before they can move away to safety.

But such moments of individual glory are few and far between. Instead, gameplay is much more defensive in World of Warships. There’s a greater focus on positioning and smart team coordination and map awareness. Each ship plays a vital role, whether it’s a scouting cruiser or a hard-hitting battleship. A good player can hit their target from 4 kilometers away about 50% of the time; a great player would have positioned themselves so they can fire without fear of retaliation.

For a newcomer, though, this emphasis on teamwork might not be that obvious. At the lowest tier of play, players maneuver their ships without purpose or direction. Every shot is a lucky shot, and players often spend so much time focusing on what’s in front of them that they don’t realize they’ve isolated themselves from their allies. It’s both hilarious and frustrating.

Luckily, the core concepts of the game are simple enough for anyone to pick up and learn. After some time, you’ll progress past the lowest tiers. As your skills evolve, so will your expectations for positioning, communication, and coordination.

There are four ship types that all offer completely unique styles of play. All have different speeds, can equip different weapon types — they even have armor in different places, so what might be an effective hit against one ship could mean nothing to another. And your ships can be equipped with a variety of loadouts and special equipment to boost their repair capabilities or offer wider scouting capacity.

Aircraft carriers are the weirdest ship type and play nothing like the others. Instead of engaging directly in ship-to-ship combat, carriers sit in the back lines launching squadrons of bomb-toting aircraft to wreak havoc from the skies. In theory, carriers are meant to add a touch of Wargaming’s other massively multiplayer game, World of Warplanes, to World of Warships.

In practice, carriers are a bore both to play and defend against. Rather than dealing damage in chunks, the aircraft squadrons you deploy deal damage over time. This means the carrier playstyle is a mundane loop of flying your planes out, getting within attacking range, and dropping bombs. The flight mechanics are extremely simplistic — a far cry from the exciting air acrobatics of World of Warplanes. If they weren’t so effective against battlecruisers, I can’t imagine anyone would care to play carriers at all.

Speaking of battlecruisers, the way armor penetration works in World of Warships clearly favors larger ship types. The game works on a semi-realistic “Citadel” system. The citadel is where the vital components of the ship are stored, and it’s usually located somewhere around the center of the body. Most new players might not be aware, but your torpedoes and bullets aren’t doing full damage to your enemies. Only a direct hit to the citadel deals 100% damage to a ship — everything else only does 10-30% damage. On most ships, the hull around the citadel has the thickest armor. This means, for maximum effectiveness, you need ammunition that will pierce through that armor and explode in the citadel. This means most random matches you jump into will be dominated by battleships — the most powerful and thickest-armored of the ship types.

One thing that’s definitely worth noting is how good World of Warships still looks five years after launch. Wargaming has done a good job keeping up with the rising visual standards of the gaming industry. For those with lower-end rigs, there plenty of sliders and knobs in the graphics settings that you can turn down to improve performance. Even menu transparency and the rendering of tiny objects on your ship can be adjusted or removed, so there’s plenty of room for optimization´.

Not all ships are immediately available to you. Winning matches and performing well in combat earns you points that go toward increasing your Tier. As you unlock new Tiers, you gain access to more advanced and powerful warships to play with.

Combat at the highest Tiers is undeniably the most fun you’ll get in this game. All the ships at Tiers 7 and above are incredibly powerful, and the higher overall skill level of players makes combat more engaging. Teams communicate more, discussing tactics and overall strategy. Ask for backup and you’ll get it. The players are more serious about winning — you can’t expect that from the lower tiers. It’s unfortunate, then, that the vast majority of players won’t ever touch these upper Tiers. It’s not even a matter of skill level, but of time invested (or money spent).

Unless you’re willing to spend real money on levels and experience boosters, it can take you months to even unlock the higher tier ships. And once you’ve gained access to the higher tiers, you need to grind experience just to purchase the ships to have a fighting chance in combat. While you’re grinding your way to the top, you’re also spending the in-game currency to repair your ships and restock ammunition.

Unlocking all ships in a branch for one country costs nearly 1 million XP. That’s roughly 4,000 games. Assuming a game lasts 15 minutes, that’s 1,000 hours of gameplay just to research one branch of ships for one nation. Remember, there are four ship types (Destroyer, Cruiser, Battleship, Carrier) and six nations represented in this game. You cannot realistically expect to unlock everything in this game without spending a significant amount of money.

This isn’t to say that World of Warships is a pay-to-win title — far from it. But it’s definitely a pay-to-progress game. Luckily you have codes to help you get a better start.

If unlocking every ship and reaching the highest Tiers of play don’t matter to you, that’s perfectly fine. Though the higher tiers offer prettier ships that pack a punch, gameplay at the lower tiers is still a whole lot of fun. Busting through a ship’s hull with a perfectly-placed volley gets your heart pumping no matter what Tier you play in, and excellent positioning and an understanding of team compositions will serve you well even if you aren’t rocking a premium ship.

Is it historically accurate? Not at all. But World of Warships, like the Worlds of Tanks and Warplanes before it, makes for an absolute blast. It plays nothing like those two games, but still carries that Wargaming pedigree and attitude.

It also carries the same restrictive player progression system, though thankfully, it’s still a largely skill-based game. An unskilled player with a fat wallet may be able to unlock the higher tiers faster than your regular player, but they’ll still lose all their games until they improve in the game. When it comes to gameplay, World of Warships is entirely fair — they just value your time differently from that of a paying player. I’m not sure if that’s a great thing, either.

With how great the visuals and ships are, especially in the higher tiers, it’s a shame that so much of the game is kept behind what is essentially a timelock. But if you aren’t looking for the latest shiny toy to add to your collection and just want a casual warship experience, nothing beats the dumb thrill of a mid-tier scuffle.