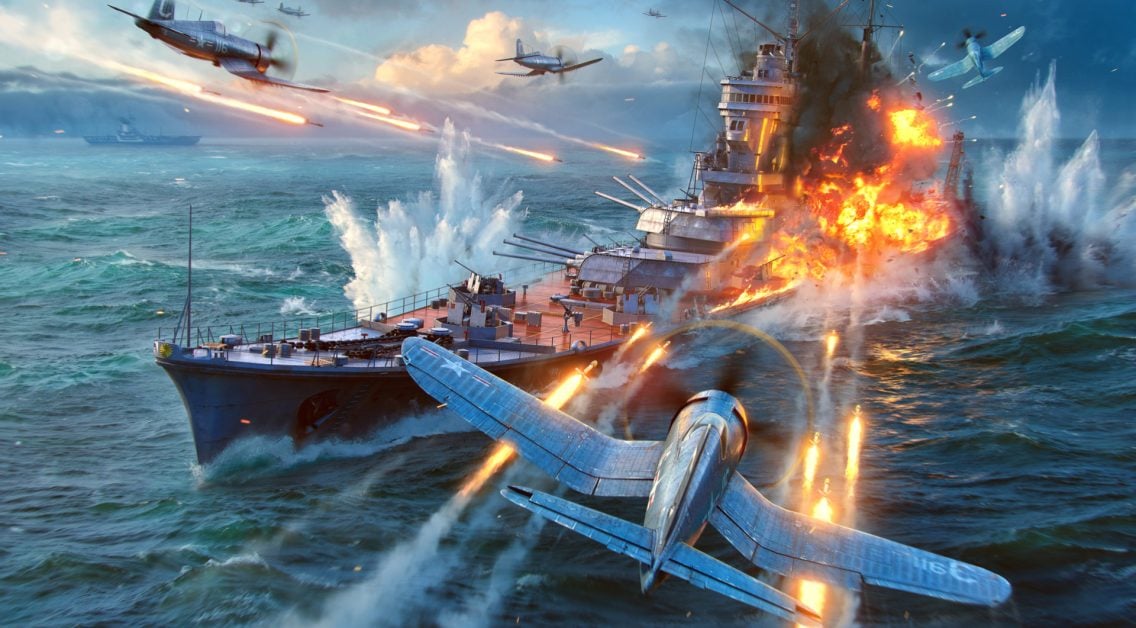 World of Warships is a free-to-play strategy and action multiplayer online game focused on naval combat mechanics. It is the “little brother” of War of Tanks and War of Warplanes and was launched in 2015. Wargaming is still the publisher and producer, but their subsidiary Studio Lesta is the one in charge of development.

The game is pretty reminiscent of the first two “War of” games in terms of gameplay, with adaptability flexible enough to suit the new environments and vehicles. There are up to 4 different types of warships and submarines are now part of the picture since 2019. There are three main modes you can choose to take part in: players can fight each other in 12vs12 matches decided randomly; they can team up in co-op mode with other sailors (the name given to the players by Wargaming) in 9 vs 9 skirmishes against the AI, or a player can engage in the Scenario mode all alone. With the game so team-centric, though, it is recommended to always play with a group.

There are more modes, such as the Ranked battles, for example, taking place over a specific period of time. Clans and their advantages are back and, good news for most players and newbies, Wargaming learned from the critics about the matchmaking in-game: the game will now decide who plays with who based on the tier each ship belongs to. All in all, if you are a “World of” connoisseur, you would have a hard time getting lost. The game has been released on all gaming systems (minus the Switch) and has been named World of Warships Blitz for its mobile version and Legend for the edition on consoles.

Let’s look at the latest World of Warships stats and facts to see if it is as much a success as its counterparts.

Wargaming has managed to capitalize on the concept of war in a way Call of Duty or battlefield never thought about. The company garnered a good amount of fans, all into war vehicles and slow-paced and strategic rhythm. This time, sailors are in the spotlight, showing off their favorite girls and their massive armament.

Riding on World of Tanks’ success, WoW has managed to show that, even for such a niche genre, women are not to be underestimated. Even if their number is way lower than their male counterparts, they are still really noticeable, with some of them being recognized for their skills and their involvement in the community. We can notice here the same pattern as with the other World of games, with the players being on the mature side. Also financially independent. More than ever, the 50-60+ group distinguishes itself by being really present, whether in-game or on the forums.

The number of registered users is obviously higher in 2021, but Wargaming keeps a firm hold on the data regarding World of Warships. That could also mean that no significant milestone has been crossed and the company does not feel the need to update us since it did not reach ‘that’ number. Plus, there is barely any information out there on how the game is faring on consoles and mobiles devices.

3. The mobile version World of Warships Blitz has been downloaded more than 10 million times.

Unfortunately, there is no available information for other platforms. But based on what you can glean from forums and players themselves, it seems like most players are on mobile devices and PC. And Android owners are again more active than Apple ones.

WoW does make money, but in terms of production cost, we can wonder if it is a real profit. However, let’s also remember that part of the community is “on strike” right now due to the friction between the player and Wargaming. Nonetheless, the game still ranks pretty well among its peers (action games) and has been around for 6 years already. Players do agree with the fact that they should spend money. What they do not agree with is seeing the freemium system abused by pushing people to spend more because of luck and enabling gambling addiction.

5. The studio received 4 awards and 4 accolades

If more have been won over the years, the lack of communication from Wargaming pertaining to that sort of information is at fault for their absence in this article. However, after 6 years of continuous activity, you would think the game is now eligible for the “Still Playing” award.

Time to take a closer look at how the game is consumed by the community. From the countries where the fans are the most invested to a ranking of the favorite and most efficient warships, we got it all.

Therefore, Europe is where the game has the most active users and -surprisingly- North America is at the bottom. A surprise considering that they are usually at the top when it comes to MMO. The numbers have been pretty consistent day after day and no drastic loss has been observed for a while.

7. World of Tanks has a selection of over 400 warships from 12 nations.

This ranking is based on the players’ choices and preferences. Otherwise, a powerhouse like the Missouri would, without a doubt, be at the top. But since it has quickly been discontinued, it does not appear here. Like always with their historical games, Wargaming paid attention to the lore: not only are the ships graphically detailed, but they are also pretty much real or inspired by real ones.

WoW is doing well on Twitch too, what with the streamers being literally from all over the world. It is really easy to find different nationalities without having to look really hard. Plus, through the Community Program, some streamers can build up their own fanbase while promoting the game.

Like World of Tanks, Wargaming made it a point not to stay active on just one platform and expand as much as possible. The result is that you can find the game everywhere, up to the all-new next-gen consoles such as the PS5. The Switch is the only one not included in the list, but that might have to do with the fact that several complaints were received with WoT since the Switch just ports mobile versions of MMO.

Even with the lack of information, it has been acknowledged that the PC version is the most played one. Even if the numbers here are only on Steam, you can only imagine how many more players they have through the Epic Store, for example. Plus, even after 6 years, the game is still doing well in terms of active users. Hopefully, those players are also spending a bit of money since that is how the game survives.

10. The game is praised by players on all platforms except iOS.

Most of the bad reviews have to do with the fact that the players willing to spend their money gain an advantage and that everyone likes destroyers because they are powerful. Objectively, none of those reasons are actually an issue as they are fully part of the gameplay and the game is actually pretty well oiled.

As the younger brother in the “World of” games, WoW has been standing its grounds pretty well. The game might have a smaller community than WoT, it is doing way better than World of Warplanes released in 2013. In fact, Massively OP decided to hold a small poll to see which one was a favorite among Wargaming’s fans and, lo and behold, WoW won by a landslide. But WoT is a veteran with years of achievements and loyalty under its belt, after all.

Other than that, the game is doing well for itself with a team always providing updates and organizing events. They have several collaborations with other industries such as anime or even other games (there is one with Warhammer 40K at the moment) and the cooperative nature of the game makes it even more interesting to come back to, as the players can literally see it as going back to their crew.

Let’s hope that the tense situation between Wargaming and its audience will be solved in the near future, as the game is way too good to be abandoned for such a reason.