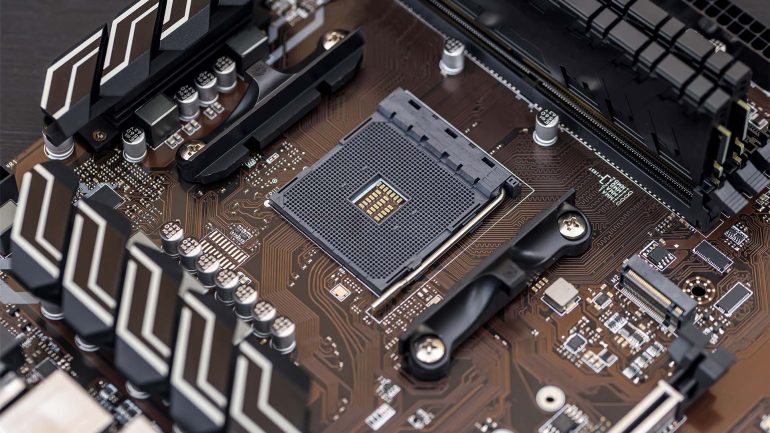 Users who want to upgrade to a Ryzen CPU have multiple choices when it comes to the motherboard that’s going to power their build. You still have the B450 chipset, a decent budget solution in case you find a quality B450 board at its regular retail price. Next, we have the B550 chipset, the new budget, and the mid-range solution packing PCIe 4.0 support. Then there’s the X570, the flagship chipset for Ryzen CPUs. When it comes to the sheer number of motherboards available for different CPU lineups, we have hundreds of models to choose from.

Ryzen CPUs can also work with the entry-level A520 chipset. AMD recently released the A520. This chipset is made for extreme budget users, affordable office builds, and small and quiet HTPC machines. This A520 powers a number of motherboards, but which models are the best A520 motherboards on the market? We will try to answer that question today, listing the best A520 boards for various use cases.

While you’re here, you can read our A520 motherboard list that includes every single A520 motherboard available for purchase. If you’re looking for something beefier to power your Ryzen process, check our best B550 motherboards and best X570 motherboards guides, they feature a number of mid-range and high-end options. 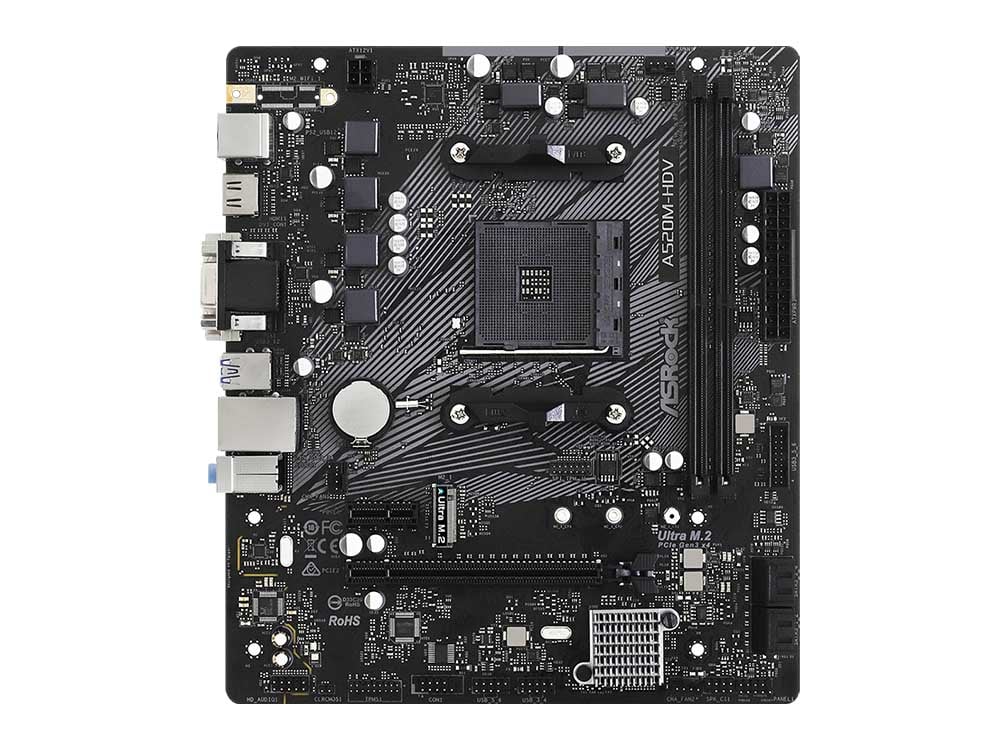 ASRock is offering the best dirt cheap A520 motherboard you can find right now, the ASRock A520M-HDV. It can be a solid choice for an HTPC that also runs games since you can pair the board with a cheap and power-efficient Ryzen CPU along with a decent, gaming-grade GPU.

Feature-wise this board is pretty much barebones. It has two DIMM slots and just one PCIe x16, and a single PCIe x1 port. You don’t get any VRM heatsink, but that’s okay since this model isn’t designed to run anything more powerful than the, let’s say, the Ryzen 5 3600 or the Ryzen 5 5600X.

Other specs include support for DDR4 4600 memory, four SATA III and one M.2 slot, as well as the Realtek ALC887 audio codec responsible for the audio section. On the rear, you can find four USB 3.2 Gen 1 ports, two USB 2.0 ports, along with a selection of video outs, perfect when using the board with an APU. These ports include one D-Sub, one DVI, and one HDMI port. 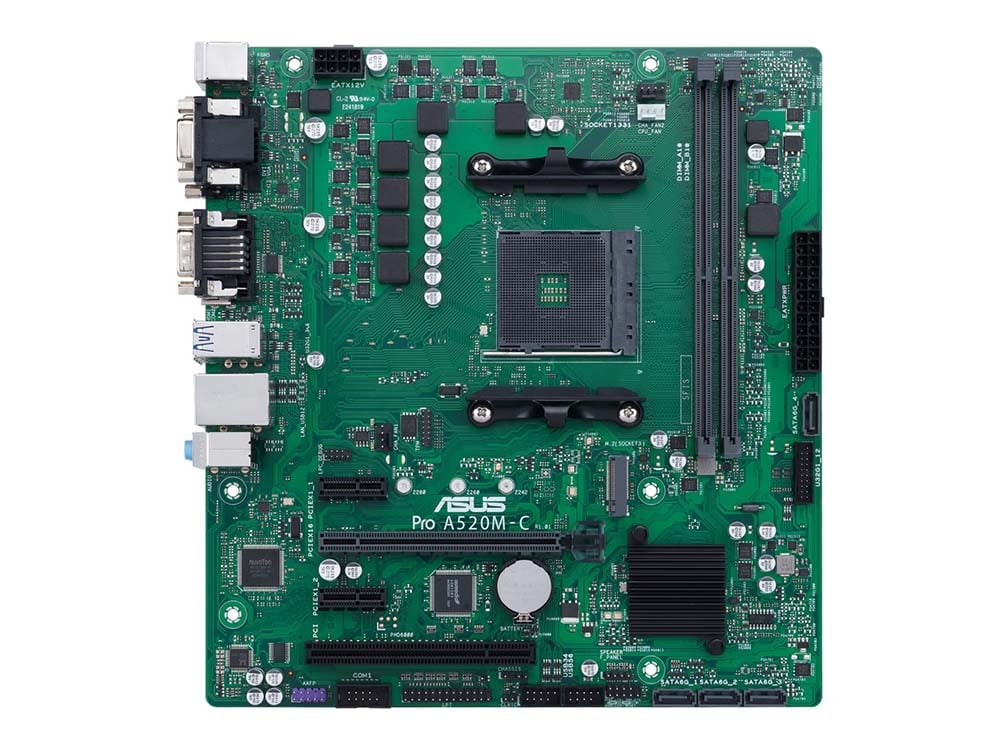 Users looking for the best A520 motherboard for an office PC or a setup that can be used in large companies should take a look at the ASUS Pro A520M-C/CSM. The ASUS board features exclusive options such as a Dedicated LPC header and debug card with an LCD display, which can be very helpful for employees in the IT department.

You also get faster BIOS, ASUS Control Center Express(ACCE) that should make IT management easier, and a moisture-resistant coating on the board, allowing users to run this board in harsh industrial environments.

Other than these business-specific features, you’re looking at a pretty basic board. The Pro A520M-C/CSM has two DIMM slots and supports DDR4 4600 memory. It also includes four SATA III and one M.2 slot. While the board has one PCIe x16 slot, it does come with two PCIe x1 and one PCI slot for easier expansion.

You also get gigabit LAN and Realtek ALC887 audio codec. The rear panel features four USB 3.2 Gen 1 and two USB 2.0 ports along with a DVI, D-Sub, and HDMI port. The rear panel also includes one COM port, used by many industrial machines. 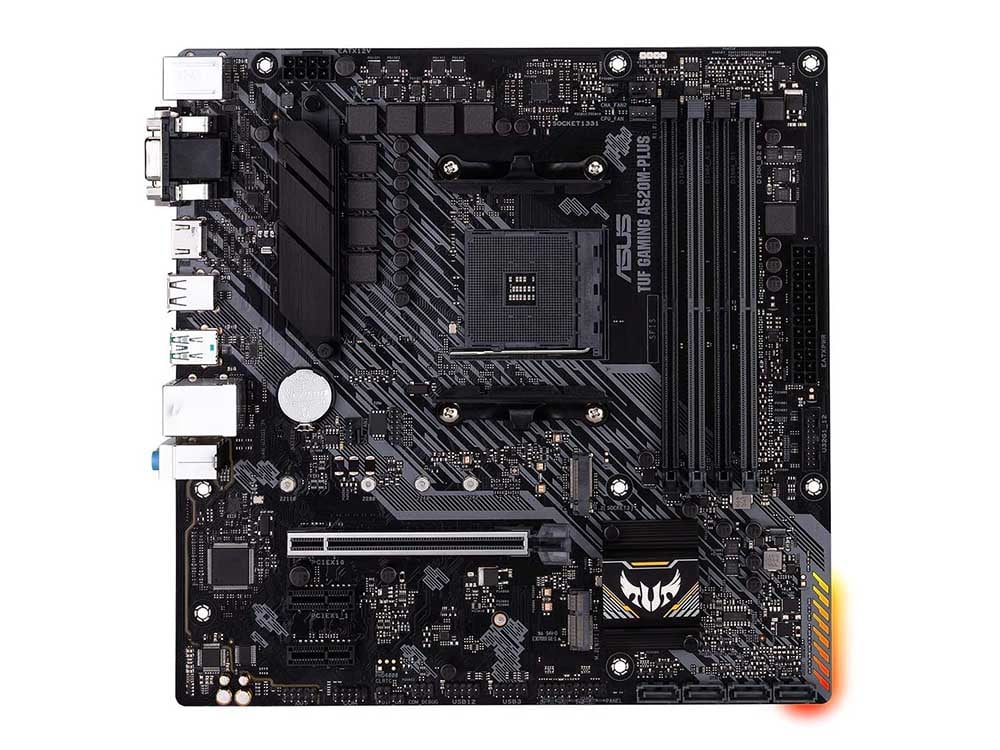 Again, the Amazon button leads to a search box so i’ve included the Wi-Fi version of the board instead: https://www.amazon.com/ASUS-TUF-A520M-PLUS-Motherboard-DisplayPort/dp/B0997N7P12

If you’re looking for the best A520 mobo for a budget gaming PC, check out the ASUS TUF Gaming A520M-Plus. This model has VRM that should be good enough to run the 3700X processor, maybe even a 95W SKU. Just don’t go with anything more powerful. Other specs include four DIMM slots with support for up to 4800 MT/s DDR4 memory.

You also get four SATA III ports and one M.2 slot. Expansion slots include one PCIe x16 and two PCIe x1 slots. The board includes a Gigabit LAN, Realtek ALC887 audio codec, and a Wi-Fi module that supports Wi-Fi 5 standard.

Out on the rear panel, you can find one USB 3.2 Gen 2, four USB 3.2 Gen 1, and two USB 2.0 ports. You also get a selection of video ports that include one DVI, one D-Sub, and one HDMI port. It’s worth noting that this board also includes RGB support. This is a solid choice for gamers on a budget. If you’re on a tight budget, you could also check out our list of the best B450 motherboards.

As for the best A520 board with a Wi-Fi connection, check out the MSI MAG A520M Vector Wi-Fi. It’s a gaming-oriented board, and its packs Wi-Fi 5 connectivity along with Bluetooth 4.2. Other specs include two DIMM slots and support for DDR4 4600, four SATA III ports, and one M.2 slot.

Connectivity-wise, the board features a gigabit LAN along with the Realtek ALC892 codec responsible for powering the audio section. In terms of expansion slots, you get one PCIe x16 and two PCIe x1 slots. The rear panel features four USB 3.2 Gen 1 ports, two USB 2.0 ports, along with one HDMI and one DisplayPort connector.

Overall, this is a solid budget board with Wi-Fi but again, if you find a half-decent B450 board with Wi-Fi connectivity for the same money, get that one. Especially if you can find a dirt-cheap B450 motherboard on the preowned market. 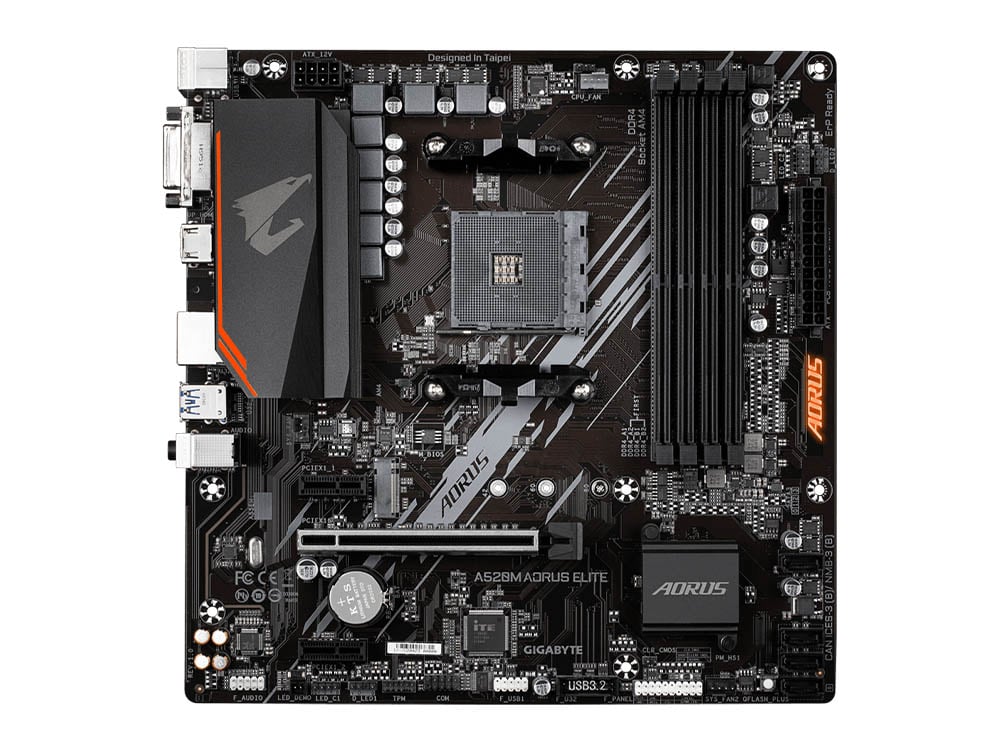 The Gigabyte A520M Aorus Elite is by far the best-looking A520 motherboard. Even its mATX version looks slick, with the large rear panel shroud and subtle Aorus logo that burns bright at the side of the board.

On the other side, the ATX version has a couple of RGB effects, which is really cool to find on such a cheap motherboard. Overall, the Aorus elite is the only A520 board that cares about its design, so it’s naturally the best-looking A520 motherboard. 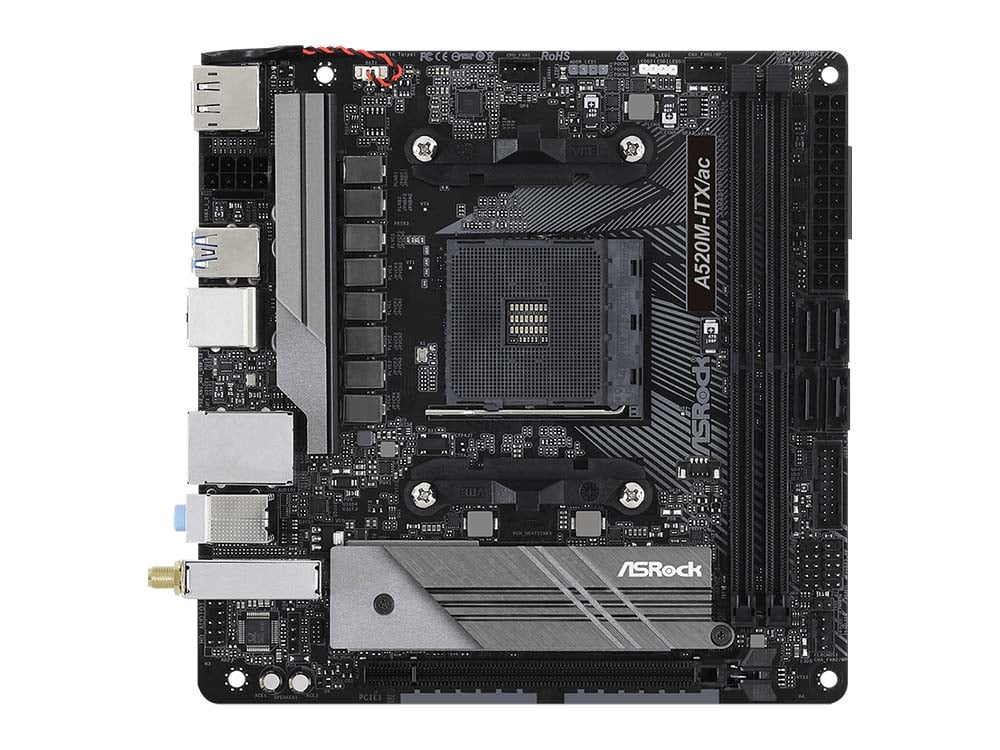 Last but not least, we have the best Mini-ITX A520 board. The choice was between two models from ASRock and Gigabyte, and we went with the ASRock board because it has a better, 8-phase VRM.

The ASRock A520M-ITX/ac packs very solid specs for a Mini-ITX board rocking the budget A520 chipset. The board packs two DIMM slots with support for DDR4 4733. Next, you have 4 SATA III ports and one M.2 slot that comes with a heatsink, which is rather nice to see. There’s also one PCIe x16 slot, which is about all when it comes to expansion slots.

Connectivity-wise, there’s gigabit LAN along with a Wi-Fi card that supports Wi-Fi 5 speeds and Bluetooth 4.2. The Realtek ALC887 codec is powering the audio section. The rear panel features two USB 2.0, three USB 3.2 Gen 1, and one USB 3.2 Gen 1 Type-C port. Another pleasant surprise. The rear panel also hosts one HDMI and one DisplayPort connector.

Overall, this Mini-ITX board is pretty packed and should be a nice choice for quiet and low-powered HTPC or some budget Mini-ITX gaming build. If you plan on building one, take a minute and visit our guide for the best Mini-ITX cases.

Should you buy an A520 motherboard?

Firstly, gamers should avoid A520 boards unless they are looking for an extremely affordable motherboard capable of running budget gaming CPUs, such as the Ryzen 3 3300X or the Ryzen 5 3600.

Even then, you should think about getting a B450 or a lower-tier B550 motherboard. With the first option, you’re getting more USB lanes, better VRMs, and with the latter, you get all that along with PCIe 4.0 support.

Those looking for a base for an affordable and reliable office computer could check out the A520 options. There are a couple of boards designed specifically around office needs. They include features such as legacy video ports (did someone mention VGA?) and other ports that aren’t usually found on most modern motherboards.

These office-centric A520 models also feature increased security and high endurance. Just remember that the A520 boards aren’t compatible with AMD 3000 APUs such as the Ryzen 5 3400G and Ryzen 3 3200G.

If you want to pair an AMD APU and the A520 motherboard, wait for the Ryzen 4000 series APUs to start selling for the general public. At the moment, 4000 series APUs are only available to OEMs. This is why it’s better to pair a cheap APU (like the Athlon 3000G) with an affordable B450 board than to use the A520. Not only do you have to wait for 4000 APUs, but you’ll also pay more since the new APUs are quite expensive.

Overall, while the A520 is a very affordable chipset, we recommend getting a cheap B450 board instead of an A520 motherboard. Gamers will get more connectivity options, better VRMs (on select B450 motherboards), or even PCIe 4.0 support if they opt for a budget B550 board.

And those looking for a motherboard and CPU combo for their office PC builds can get the cheapest B450 board right now and combine it with an affordable APU (like the Athlon 3000G) instead of waiting for 4000 APUs to start selling to the general public.