Need a new skin to showcase your personality in multiplayer? Check out some of these cool Minecraft skins! 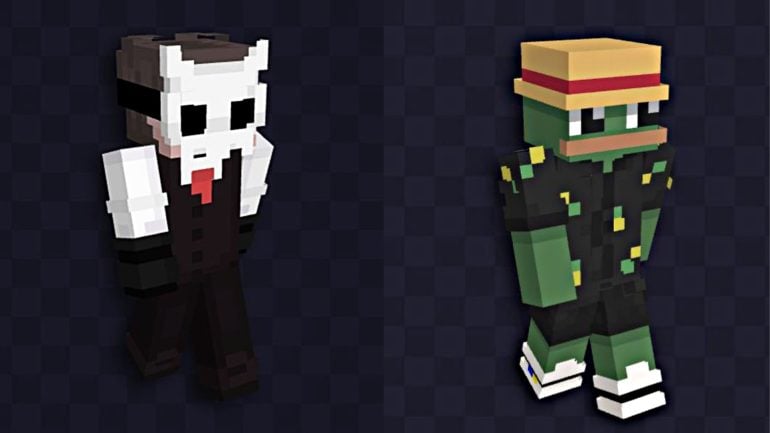 Minecraft is a versatile game. It includes many different versions and modes that can keep you occupied for hours, but a very important and popular aspect of each version of the game is the multiplayer mode. When you’re playing on a server with other people, it’s important to establish an image of yourself so everyone can recognize you.

Because of that, we’re going to be talking about the best Minecraft skin for your avatar. The community has come up with thousands of interesting avatar designs over the years, with some of them becoming massively popular among the entire community. Here are some of the most popular and interesting ones.

Personalizing your experience is a very important part of Minecraft, and the community has also designed some epic Minecraft adventure maps, so you should take a look at those as well. If you’re doing that, we also recommend you check out the best realistic Minecraft resource packs.

Internet memes are a core aspect of popular culture. You can hardly get by a single day without seeing some meme reference online, and that’s a good thing because they propagate humor and positivity where it is dearly needed. Nazamen took some inspiration from memes to create this Minecraft avatar in the image of Pepe the Frog. The character’s cheery personality is reflected nicely here, and he gave him some vacation clothes for a snazzy look!

Mooshrooms are very cute creatures you can find in the overworld in Minecraft, and this character skin takes inspiration from that to give you the option of embodying the vibrant colors of the cuddly cows. On top of the skin looking very nice, it also has the added benefit of having a rubber duck stapled to the front of it for some added color. This is one of the best Minecraft skins because it takes a fundamental aspect of the game and gives it more personality.

The next skin we have emphasizes style above everything else, with a rad purple suit with nice accent colors to make everything work well. The different shades of purple work very well with each other to create overtones that immediately draw your attention to it. One of the most noticeable features of this skin is the very vibrant purple hair that goes well with the rest of the skin.

This skin is another one that emphasizes elegance, featuring a nice vest as part of a suit with a white shirt and brown pants. This outfit is something that you might even see at a dinner party or something. However, the most important aspect of this skin is the white mask on your character’s face. It looks very mysterious and interesting, ideal if you’re playing some spooky maps on a server.

Coming back to the Internet memes, most of us have been assaulted with the video of a very oily, very large, muscular man dancing and smiling. This video was absolutely viral for a few months and KDfoxy went through the effort of recreating it in Minecraft. Just like the video, this Ricardo Milos skin features a muscular body with a red bandana, United States underwear, and a cheeky smile. It’s a very fun skin if you’re looking for something cool and fresh.

Among Us is a very popular game because it came out at a perfect time, right when everyone was locked inside due to the pandemic. The interesting concept of the game was a great way of spending some quality time arguing with friends and outsmarting strangers. Because of that, Daavide came up with this design — an Among Us crewmate in a maid’s outfit… for some reason. Nevertheless, it’s a fantastic and hilarious skin!

The next skin we have is a very simple one, but it’s done so well that it stands out from other skins, instantly drawing attention to yourself. The general idea of the design is that your avatar appears completely black with white eyes and a grey, personalized hat. The hat also has a face, so it’s a pleasant way of giving the entire skin a more friendly vibe instead of being creepy. Gold star for TheNoblessis!

Wither Skeletons are interesting beings in Minecraft since they are a notable departure from normal skeletons and they are usually much harder to kill. Well, just because they are a scary enemy in the base game doesn’t mean that you can’t take them and make a cool skin out of them. This design by Nihiloum takes inspiration from Wither Skeletons and makes it look cool by giving it a black suit along with a bowler hat and a white shirt. It looks awesome especially if you’re a fan of elegance.

When it comes to the best Minecraft skins, we always love to see ridiculous, out-of-the-box ideas that no one in their right mind should come up with. That is why we have this cute little Hello Kitty design by Tristaanh which features Hello Kitty’s head on top of an absurdly muscular body. This changes the idea of Hello Kitty a bit because you usually don’t expect her to be able to rip you apart, but it’s still a very funny and unique concept that we can’t get enough of!

And finally, we have a skin idea that will appeal to those of you who like the gentle fairy aesthetic. It features very light colors in the clothes, hair, as well as skin tone to create something very noticeable in the sea of players on a server. The design itself is very pleasant and wholesome, so if you’re a fan of those factors, then this is definitely one of the best Minecraft skins!

Now you have all of the material you need to either embody one of these skins or create your own, just as you should if you want an interesting skin to showcase your personality. Minecraft is a fun game, but sometimes you need to take a break and enjoy some new games. Take a look at the best war games, best tank games, and the best WW2 games for something new and exciting!