RGB is everywhere when it comes to PC gaming hardware, and PC cases are not an exception. These days there are hundreds of different RGB models out there, boasting either RGB case fans, RGB strips, RGB LED arrays on the case itself, or all of these together.

Now, coming up with a list of the best RGB cases implies that, today, we’re focusing on design and RGB implementation. Many cases shown here have something going for them when it comes to their RGB implementation other than RGB fans, but there’s also a fair share of picks that don’t have any other RGB effects aside from the fans. Some of the cases shown here don’t have the best airflow, aren’t thermal performance champs, and can be difficult to build in, but they sure look great. Finally, there’s no category for the best white RGB case because most models featured below are available in white color.

If you want more RGB content, definitely check our list of the best RGB motherboards. We also have guides for the best RGB case fans and the best Nanoleaf alternatives for turning your whole rook into an RGB light show. 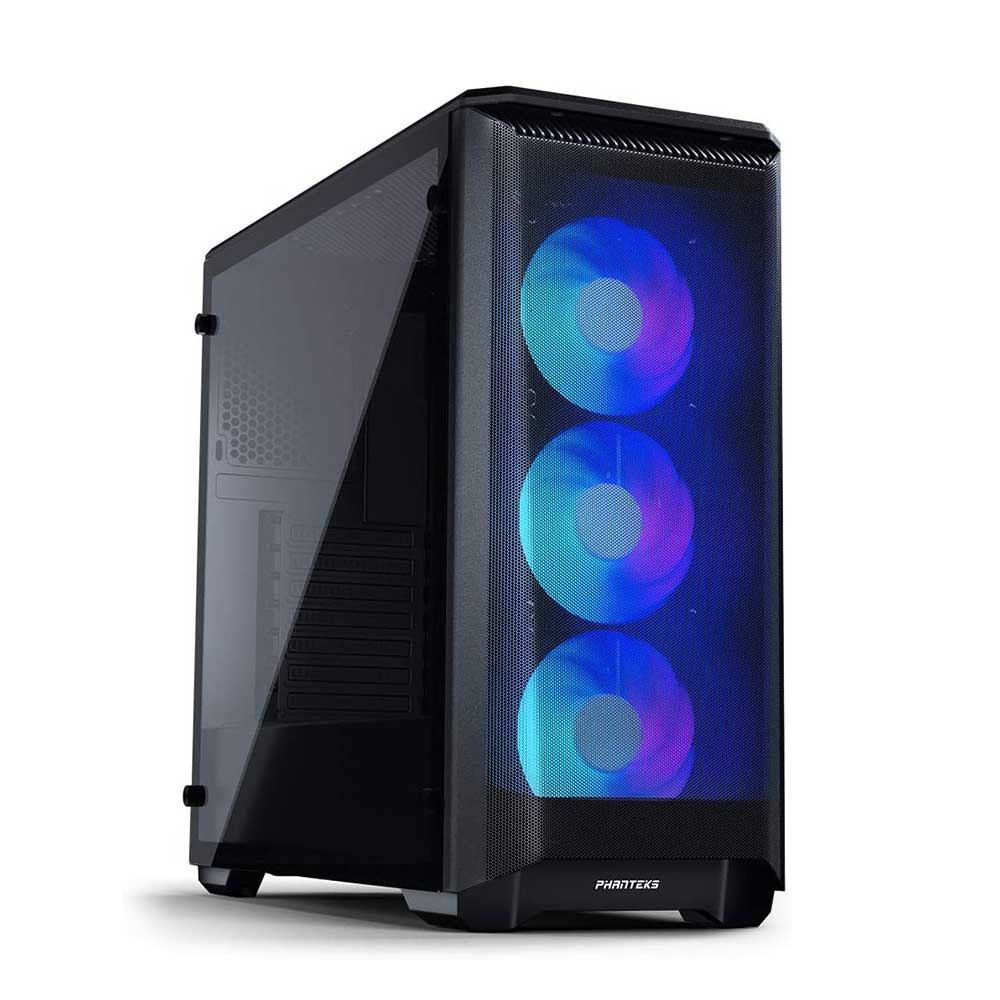 Most users want a solid amount of RGB but also nice aesthetics and competitive specs without paying too much money. A pretty good thermal performance also wouldn’t hurt.

The Phanteks Eclipse P440A ticks all of these boxes, and it is the best value RGB case you can get. It’s not too expensive, looks great (especially in white), comes with three RGB fans preinstalled, and has a mesh front panel that allows excellent thermals.

On top of all that, you can install two additional fans at the top and one at the rear. The case supports a vertical GPU mount, it’s fairly easy to work in, and it can house a 360mm and a 280mm AIO radiator at the same time.

There’s enough space for two 2.5” and two 3.5 “ storage devices, and while the front panel doesn’t include a USB-C port, it does come with handy RGB controls. 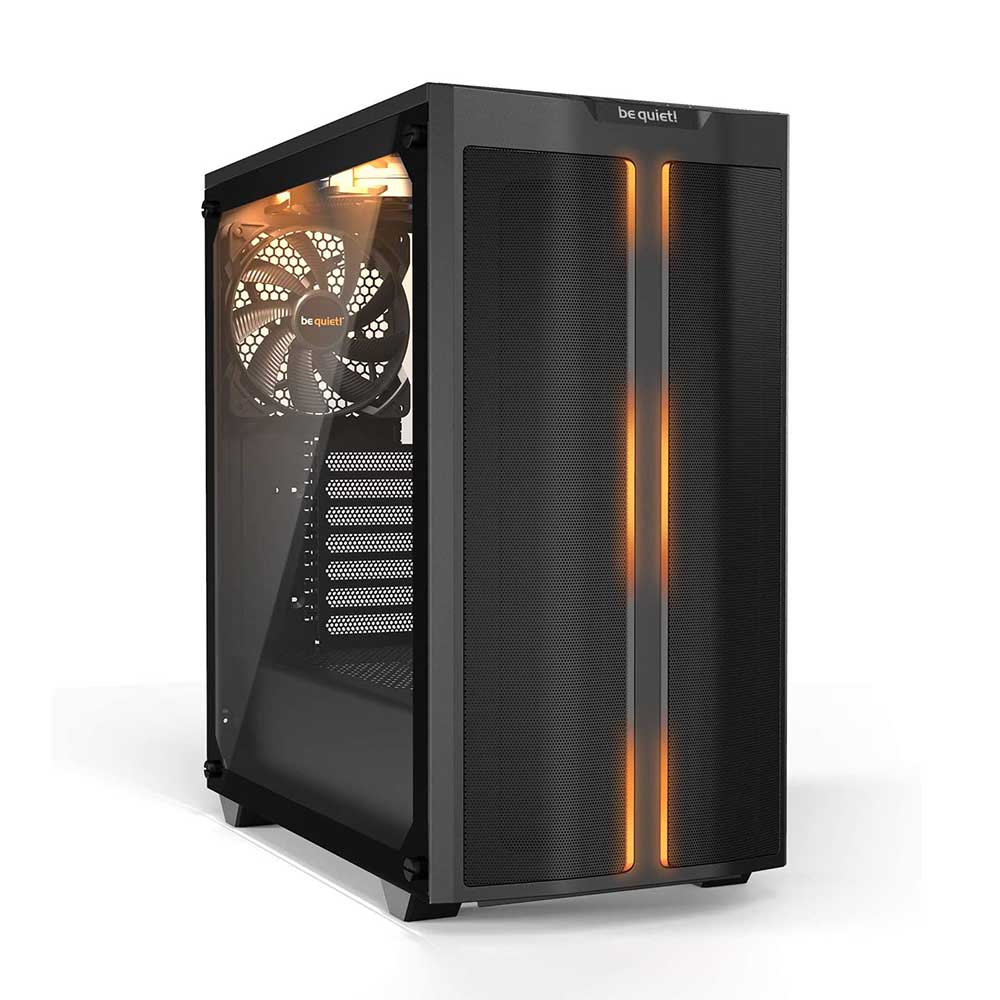 Airflow PC cases are all the rage right now, and be quiet!, known for their, well, quiet fans and cases, have made one of the best airflow PC cases in 2020. On top of all that, the Pure Base 500DX also has a subtle but very attractive RGB implementation.

The front panel is made out of two mesh sides divided by a ridge with a pair of RGB stripes on its sides. And then, we have RGB arrays on the top of the case. Overall, this is a very slick look.

But the Pure Base 500DX also has excellent thermal performance, pretty low noise, comes with three preinstalled Pure Wings fans (with room for four more), is spacious and well-made, and comes with a very competitive price.

AIO support is on par with competitors, with enough room for 360mm radiators. And there’s lots of room for storage devices. You can install up to two 3.5” and seven 2.5” storage drives inside the 500DX.

This category is for mid-tower RGB cases without full-on mesh front panels. They have worse thermal performance than mesh cases, but most can handle high-end GPUs and CPUs without even going near thermal throttling temperatures.

The best mid-tower RGB case (at least to us) is the Lian Li Lancool II. First of all, it looks great, and the RGB front panel is one of the best on the market. Next, while the case wasn’t designed to have high airflow, thermal results are impressive.

There are seven drive bays in total (three for 2.5” or 3.5 drives and four for 2.5” drives. Finally, the case can house 360mm radiators, has excellent cable management, and is very easy to work in.

Overall, this is one of the best cases you can get, period. The only major downside is the lack of a USB-C port on the front I/O. And if you don’t like the noise, we advise you to replace default fans with quiet ones. 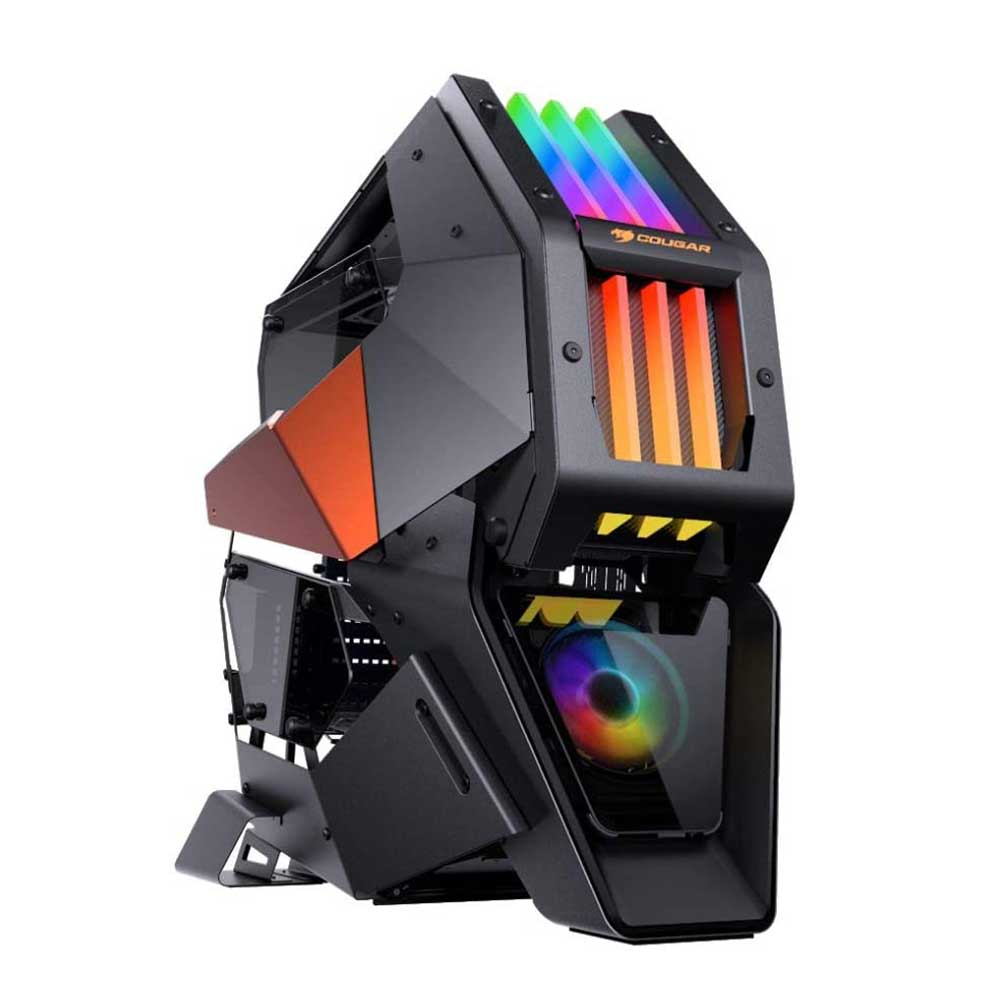 Yeah, as soon as you look at it, you realize that the Conquer 2 is the ultimate RGB case you can get. It looks impressive and is chock-full of RGB fans and other RGB effects. If you’re looking for the best full tower RGB case, this is one of the best choices on the market, at least if we’re only talking about the design and RGB implementation.

Specs-wise the Conquer 2 comes with an open design, so thermals shouldn’t be an issue. There’s room for a 360mm and 240mm radiator at the same time, and the case is suitable for custom loops.

The number of drive bays isn’t impressive, with four bays in total (2.5” or two 2.5” and two 3.5”). Now, this case is built for liquid-cooled systems, so the max CPU cooler clearance is only 150mm.

Other downsides include a relatively complex design that can make building a PC inside this chassis more annoying than usual. But if you want the best looks and tons of RGB, this is the way.

The micro ATX case market was always a niche, which is also the case nowadays. The best-looking design we’ve found is the Antec Dark Phantom 301M. This is the best mATX RGB case we’ve seen.

It has really good RGB effects on the front, and while it doesn’t come with RGB fans preinstalled (it has only one preinstalled fan on the back of the case), we advise you to replace it with quality  RGB fans. Once you put a couple of fans on the front and one on the top and rear sides, the case will have much better thermal performance.

The small size makes it less than ideal to build inside it, but that’s the inherent issue in a lot of mATX cases. Specs-wise, you have room for three 120mm fans on the front, two on the top, and one on the rear. 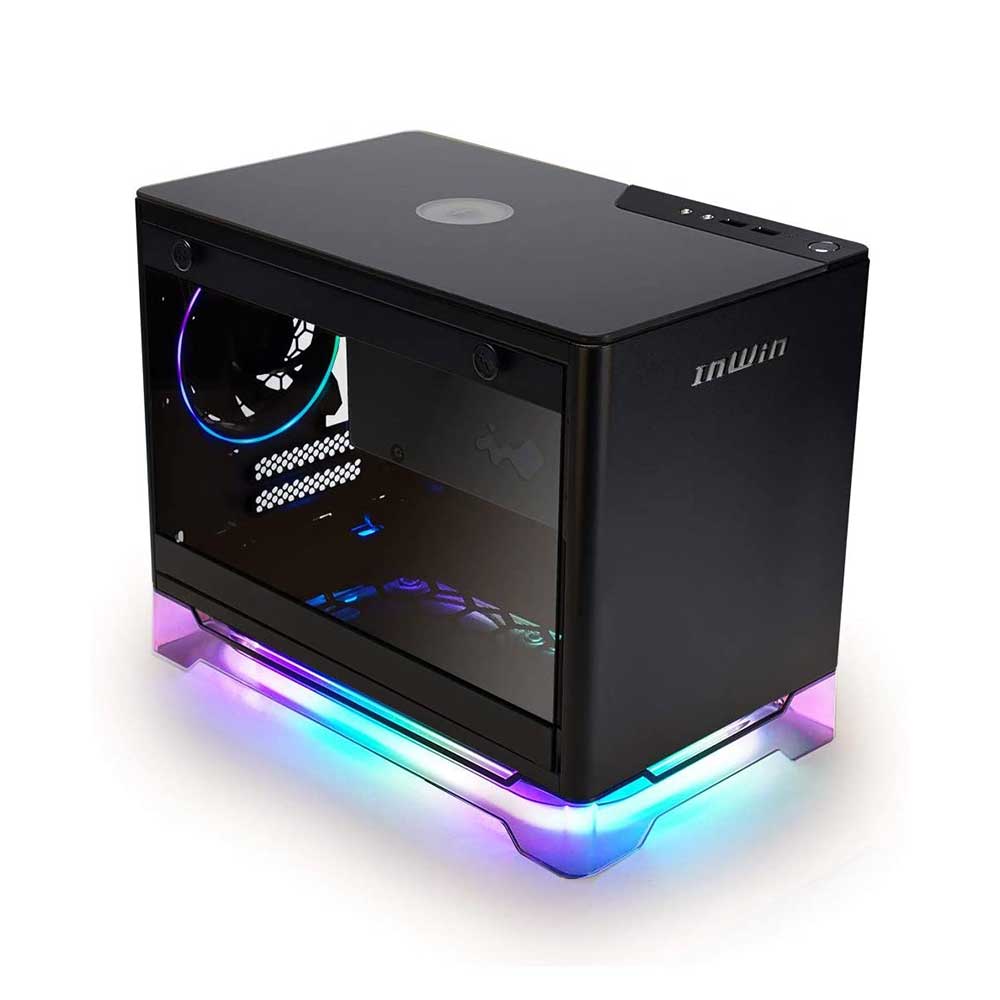 The ITX case market also doesn’t have lots of RGB cases, but this time it isn’t about lack of popularity; it’s about the small size. Most ITX cases either have no room for case fans, have no room for in-case RGB solutions, or both. If you’re looking for the best ITX RGB case with built-in RGB effects, it’s the InWin A1 Plus.

This case isn’t the smallest ITX case; it’s quite expensive, hard to build in, and comes with a pre-installed 650W PSU that might not be enough for everyone. You can replace the PSU with another SFX model, but the process includes lots of tinkering.

It also includes the removal of the plastic shield between the PSU and the side panel. Other features are pretty solid. Thermal performance is one of the best on the ITX market, and the case comes with room for four case fans.

As for the clearances, you can go with a dual-slot GPU up to 320mm in length and a CPU cooler up to 160mm in height. The case can house two 2.5” drives with AIO support limited to a single 120mm radiator.

An interesting addition to some could be the wireless Qi charger found on the topside. Overall, the In Win A1 Plus is expensive, but it has the best RGB effects we’ve seen on an ITX case, and it also has great thermals. 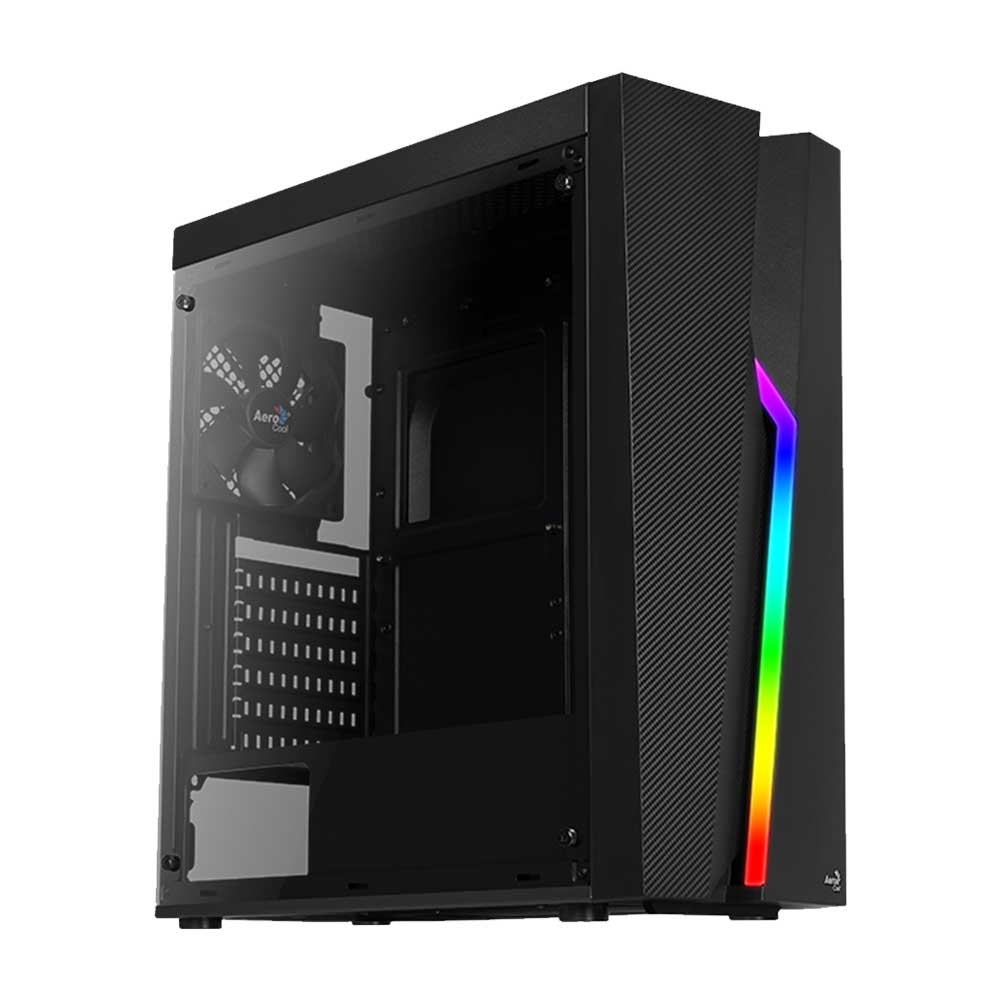 Some cases we’ve mentioned above can fit into the budget category. Cases such as the Phanteks P360A, Cooler Master MB320L, or the Montech Flyer Black are pretty affordable. But the cheapest of them all is the AeroCool Bolt-G. This is a budget case that comes with a surprisingly good RGB front panel.

There’s one pre-installed fan here, but since the case supports up to six fans, we recommend getting a three or a five-pack of quality budget fans, such as the Arctic P12s, and install those instead. Once fitted with aftermarket case fans, the case should have decent airflow and solid thermals.

As for the other features, you get an acrylic (not glass) side panel, support for 240mm AIO radiators, enough space for up to four storage drives, and a PSU shroud for improved cable management. 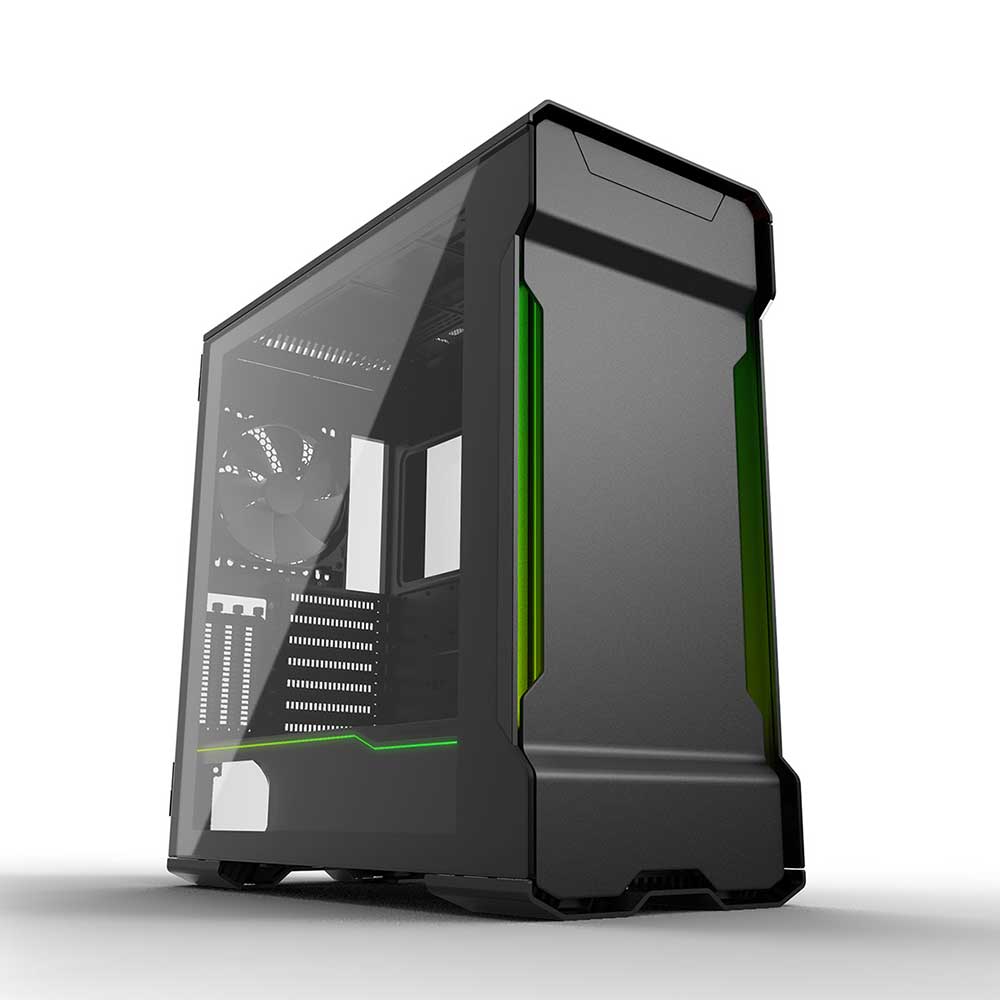 If you’re a streamer who wants to build two systems in one case and wants for that case to have RGB effects built-in, the Enthoo Evolv X from Phanteks looks like the best choice. It’s roomy enough to host an ATX, and an ITX build at the same time.

That said, installing two systems can be a pain since there’s a ton of cable management to worry about. Overall, this is great, if pricey, RGB case and one of the rare dual-system options that come with RGB implementation. 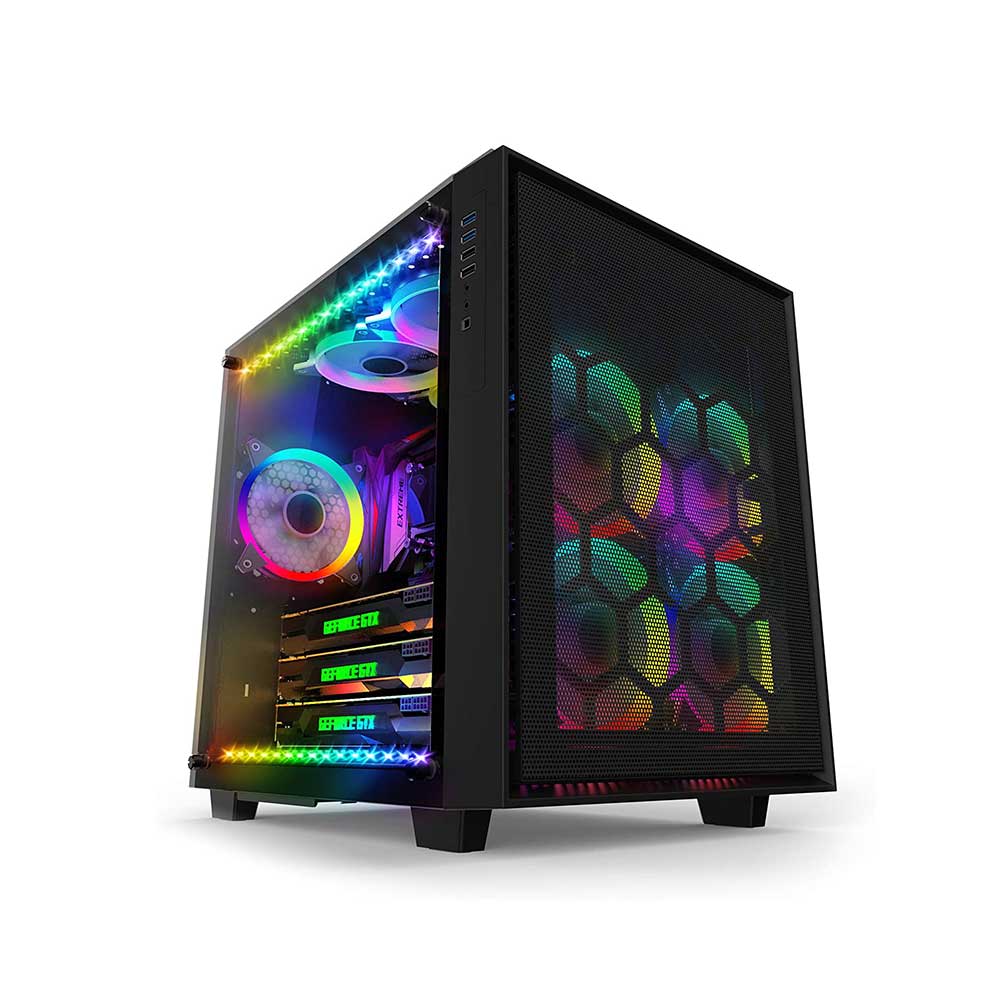 Last but not least, we have a cube-shaped case with insanely good RGB implementation. The AI Crystal Cube MAR 3 is an impressive-looking case that can fit an ATX board (it supports E-ATX, but the installation is rather complex) and GPUs up to 335mm in length.

It comes with a dual-chamber design coupled with mesh front and top panels, allowing for excellent airflow and impressive thermal performance. The case is bulky but easy to build in, and there’s support for a vertical GPU mount.

Overall, this is the ultimate swag case. Side-mounted RGB strips are extra bright, and four RGB fans on the front will make sure you have the best RGB light show possible.