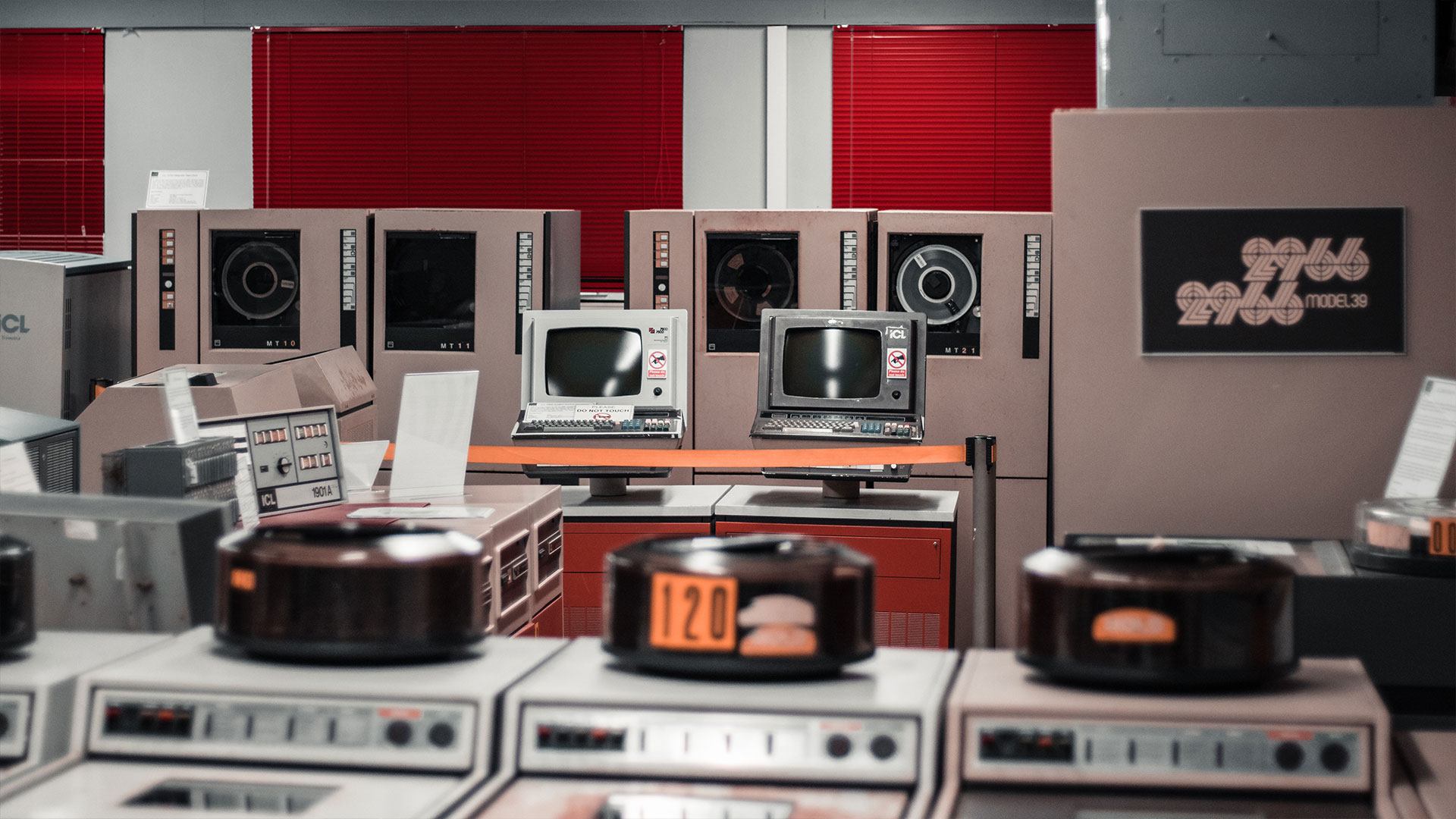 A timeline of the history of computers

This is the journey of the computer from the abacus to the iPhone.

Ever since ancient times, humanity has built problem-solving tools. In the beginning, those were crude weapons for hunting food. Gradually though, we began developing contraptions that weren’t aimed at killing other living beings.

As our ancestors transformed from hunter-gathering to agriculture societies, their focus shifted. Humanity invented the written word. It began trading. It built cities and impressive feats of architecture. It needed devices capable of solving number-related problems.

The first proto computing tools were born. Simple contraptions, pebbles on sand. Then a portable mechanical calculator, known as the abacus. As mechanics and engineering thrived during the age of enlightenment, the first mechanical computers were born—impressive apparatuses, able to perform surprisingly complex calculations.

The quantum shift took place after the invention of vacuum tubes and, later, transistors. This allowed the construction of electronic computers. Digital tools that changed humanity from the ground up. Today, we take for granted the powerful computers we carry around in our pockets.

We often forget that it took thousands of years to reach this point, and it all started with a simple abacus…

The oldest mentions of the abacus appear, and it was first used in Ancient Mesopotamia.

Indian astronomer and mathematician Brahmagupta creates rules for the use of zero.

Leonardo da Vinci invents the mechanical calculator. Researchers have not found any device, however, only his drawings.

1614: The Logarithm is proposed

John Napier, a Scottish mathematician, invents logarithms and mentions the function in his book Mirifici Logarithmorum Canonis Descriptio (Description of the Wonderful Rule of Logarithms).

William Oughtred invents the slide rule, a mechanical analog computer based on the logarithmic scale.

1672: The stepped reckoner is invented

Gottfried Wilhelm Leibniz, a German mathematician, invents the stepped reckoner in 1672. It is the first mechanical calculator to perform all four arithmetic operations – addition, subtraction, multiplication, and division.

Henry Milt, an English inventor, submitted the patent for a typing device that is very similar to modern typewriters. He allegedly also created one.

1803: Invention of the Jacquard Machine

Joseph Marie Jacquard develops the Jacquard Machine for use as a mechanical device in the manufacturing of textile. The machine used punched cards which will be the basis for early programming techniques.

George Boole proposes Boolean algebra in his book The Mathematical Analysis of Logic. Boolean Algebra is a branch of algebra-based on true and false variables marked by 1 and 0. It would become the foundation on which all electronic digital computers work.

1865: Invention of the first commercial typewriter

Rasmus Malling-Hansen, a Danish inventor, invents the Hansen Writing Ball, the first commercial typewriter. It went into production in 1870.

Designed by Christopher Latham Sholes and manufactured by E. Remington and Sons, the Remington No. 1 introduces the QWERTY keyboard design.

1887: Dorr E. Felt files a patent for the Comptometer

The Comptometer is the first commercially successful key-driven mechanical calculator.
1887

1890: Invention of the tabulating machine

Herman Hollerith invents the tabulating machine. This electromechanical machine was used for data processing. It stored information on punched cards through the keypunch.

John Ambrose Fleming invents the simplest vacuum tube, the diode. It becomes the most critical component of electronic circuits during the first part of the 20th century. A few years later, Lee De Forest invented triode, the first electronic amplifier.

Many different inventors contribute to the invention of the first teleprinter. This device simplified the exchange of messages by having regular keyboards instead of requiring knowledge of Morse code.

Charles Ranlett Flint and Thomas J. Watson Sr. found IBM, which has become one of the biggest tech companies in the world. IBM also first coins the term personal computer.

1926: Filing of the first transistor patent

Julius Edgar Lilienfeld files a patent for the first transistor in Canada in 1925. The field-effect transistor (FET) would later become the foundation piece of all microchips.

English scientist Alan Turing proposes the model of the universal machine. It is a mathematical model of computation that predicts electronic computers and later named The Turing Machine.

1937: Shannon’s A Symbolic Analysis of Relay and Switching Circuits is finished

Claude E. Shannon, one of the pioneers of computer science, completes his master thesis, A Symbolic Analysis of Relay and Switching Circuits. It proves that Boolean algebra could be used in electrical switches. This notion is the basic concept used in all electronic digital computer designs.

John Vincent Atanasoff and Clifford Berry invent the Atanasoff–Berry Computer. It’s the first electronic computer incorporating vacuum tubes for digital computation. Based on binary math and Boolean logic, it can calculate an operation every 15 seconds and store information on its regenerative capacitor memory.

This set of computers is built and used by the British codebreakers. It is essential to break the Lorenz cipher’s cryptanalysis, which allowed them to read encrypted German Army messages during World War II.

1945: Construction of the ENIAC

The ENIAC (Electronic Numerical Integrator and Computer) is the first electronic digital computer used for general-purpose problem-solving. It is designed by John Mauchly and J. Presper Eckert of the University of Pennsylvania, US.

1947: Invention of the first transistor

John Bardeen, Walter Brattain, and William Shockley invent the first point-contact transistor and later on enables the invention of microchips.

1949: Construction of the EDVAC

The EDVAC (Electronic Discrete Variable Automatic Computer) was another electronic digital computer. Instead of being decimal, like the ENIAC, it was binary. It is the first computer that stored program instructions in its electronic memory. It kept programs on plugboards or similar mechanical systems.

1951: Construction of the UNIVAC I

The designers of the ENIAC also create the UNIVAC (Universal Automatic Computer). The first electronic computer used for business applications.

IBM builds the IBM 701, the first mass-produced computer with Nathaniel Rochester as the main designer.

1963: Invention of the first mouse

Douglass Engelbart, a US inventor and engineer, invents the first computer mouse.

Douglass Engelbart presents a prototype of the modern computer system. The system features the three main components of modern desktop computers – the keyboard, mouse, and graphic user interface (GUI) – that we are familiar with today.

Gordon Moore’s observation is that the number of transistors in a dense integrated circuit double about every two years. This became the basis of Moore’s Law.

1970: Release of the first commercial microprocessor

Intel releases the first commercially available microprocessor in 1971. The 4004 runs at 740 kHz and is built in a 10µm production process. The engineering team behind it consists of Federico Faggin, Marcian Hoff, Stanley Mazor, and Masatoshi Shima.

IBM’s first floppy disk is 8 inches in diameter and holds 80 kilobytes of data.

Xerox PARC develops the ethernet. The leading engineer on the project was Robert Metcalfe. Ethernet allows connecting multiple computers in one local network.

A decade before the Apple Lisa, Xerox releases the Xerox Alto. It is the first commercially available computer supporting a Graphical User Interface (GUI).

Steve Jobs and Steve Wozniak found Apple. That same year Apple releases the Apple I, the first computer with a single circuit board.

1976: Release of the Electric Pencil

Apple launches the Apple II computer in 1977. It is one of the first successful home computers and the first computer commercially sold by Apple.

Software Arts releases VisiCalc, the first spreadsheet computer program and is a massive success. It is available exclusive for Apple II and considered its killer app.

IBM releases the Acorn personal computer in 1981, starting the PC era. The computer uses the MS-DOS operating system made by Microsoft.

1981: Unveiling of the first commercial laptop

The Osborne Computer Corporation releases the Osborne 1, the first commercially available laptop. The laptop didn’t have a battery and had to be constantly plugged in a power socket.

Apple Lisa is one of the first home computers that is GUI based. It was a relative flop, mostly thanks to its $10,000 price.

Apple releases Macintosh in 1984 and the first computer to feature a mouse.

Seiko launches the world’s first smartwatch with a small LCD screen and memo and calculator capabilities.

Microsoft releases Windows 1.0 to run as a front end on top of MS-DOS 2.0.

1985: Registration of the first dot-com domain

1989: Launch of the GRIDPad 1900, the first commercially successful tablet computer

1990: Launch of the first internet browser

Tim Berners-Lee creates the first internet browser for the NeXT computer. He calls it WorldWideWeb.

The first Microsoft Office suite launches with Word, Excel, And PowerPoint for Windows 3.0.

1991: Launch of the first commercial SSD

SunDisk creates the first commercially available Solid-State Drive (SSD). It had a 20 MB capacity and a price of around $1,000.

IBM announces its new line of laptop computers dubbed ThinkPad. The ThinkPad line would later become one of the most popular laptop lines in the world.

The Apple Newton is the first to be commercially advertised as a PDA. It features a touchscreen and supported handwriting recognition. Its design inspires engineers for future PDA devices and smartphones.

The first Pentium processor is based on the P5 microarchitecture and starts one of the most popular CPU lines of all time.

The NSCA Mosaic web browser is responsible for popularizing the Internet. It is the first web browser capable of showing images. It works on many platforms and supported multiple internet protocols.

The Visual Phone VP-210 debuts in Japan with a .11-megapixel camera and can store up to 20 photos.

The GeForce 256 is the first commercially available consumer-grade graphics card and begins the GeForce line. It fully supports DirectX 7 and is marketed as “the world’s first GPU.”

Apple launches the Mac OS X operating system first. It brings many improvements and new features and the name is still in use by Apple. Microsoft launches Windows XP the same year. This is arguably the most popular Windows OS ever.

The first worldwide popular smartphone OS is the Symbian S60. It is developed by Nokia and it made smartphones mainstream.

AMD releases the Athlon 64 to great success. The CPU outperforms the Pentium 4 and ran at a max clock speed of 3.2 GHz.

2005: AMD and Intel release the first dual-core CPU aimed at the consumer market

Both AMD and Intel release their first mainstream dual-core processors. The key difference was that the Athlon 64 X2 was a native dual-core CPU while the Pentium D wasn’t.

Amazon releases the Kindle and revolutionizes the way we read books.

It features a 3.5-inch screen and operating system made from the ground up for touchscreen. The device would popularize smartphones like no other smartphone before. Ultimately, the iPhone would become the most popular phone model in the world.

After acquiring Android in 2005, Google completely redesigns the operating system. Triggered by the success of the iPhone which featured a simple, touchscreen-based OS. Three years later Google releases the world’s first Android phone, the HTC Dream, also known as HTC G1. HTC, then the biggest smartphone manufacturer besides Apple, was responsible for the design and manufacture.

The iPad is predicted by many market analysts to bring doom to PCs. That doesn’t happen but tablet computers become a common thing in many households.

Windows 10 quickly became the most popular OS in the world. Microsoft switches to the Software as a Service (SaaS) business model meaning Windows 10 could be the last version of Windows ever.

The iPad Pro has both trackpad and keyboard support. It could lead to tablets finally replacing laptops in the coming years.