It’s one of those little irritations that, instead of becoming less noticeable over time, turn into massive distractions. 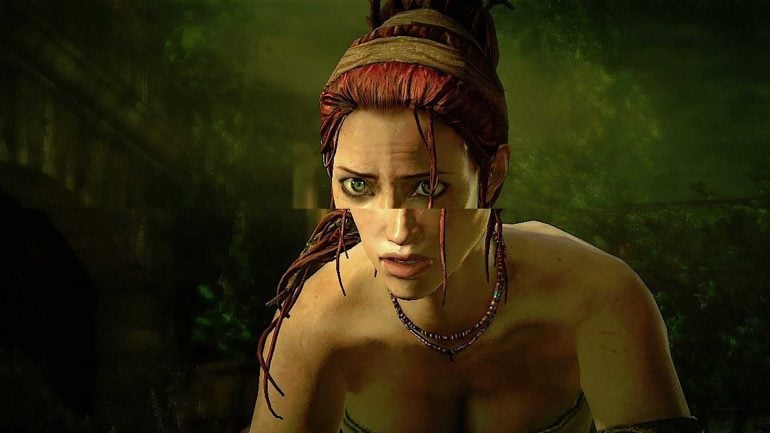 Screen tearing can be quite annoying to see. It’s one of those little irritations that, instead of becoming less noticeable over time, turn into massive distractions. Once you experience heavy screen tearing, you’ll want to get rid of it whenever possible. But what screen tearing really is, and what’s causing it? Also, while there are lots of ways to deal with screen tearing, many come with downsides. So, let’s first explain what screen tearing is, and then let’s cover the ways you can prevent it.

What is screen tearing and what causes it?

Screen tearing is a visual artifact that’s the result of the GPU and the monitor not being in sync. It manifests as an image that’s “split” in two halves by a (usually) horizontal line. It looks messy and with constant tearing whenever you move the camera, screen tearing can ruin your gaming experience.

Now, let’s see why screen tearing happens. Since a monitor normally shows images at a constant refresh rate (60Hz, 100Hz, 144Hz, etc.), in a perfect world every single frame rendered by the GPU should match your monitor refresh rate. But that’s harder to say than do.

For instance, to keep up with a 60Hz monitor a GPU would have to render a frame every 16.6 milliseconds – 1 second divided by 60 frames is 0,0166 of a second or 16,6 milliseconds- without any inconsistencies. But that’s impossible. Some scenes in games are more demanding than others. Next, certain components (RAM, CPU) can induce further inconsistencies while rendering. Also, the GPU could render the game faster than the max refresh rate of the monitor, etc.

So, in the real world, the graphics card cannot shell out frames in a 100 percent consistent fashion. This leads to desyncing of the monitor refresh rate and the GPU, with the graphics card-sending frames to the display as soon as they are rendered. This leads to new frames being inserted in the middle of the refresh cycle, while the monitor is still showing the previous frame. The result is two frames overlapping each other, leading to screen tearing.

Now, since screen tearing is a known issue for quite some time, there are some technologies used to prevent it. The oldest one is V-Sync, or vertical sync, and while certainly effective when it comes to eliminating screen tearing, it does come with certain caveats.

V-Sync is the oldest method to remove screen tearing. It works by matching the game framerate to your monitor’s refresh rate. This completely removes screen tearing but, on the flip side, V-Sync induces stuttering and increased input lag. It also prevents the game from running at framerates higher than that of your monitor’s, which can further increase input lag in competitive multiplayer titles.

Since the screen is still refreshing at its native refresh rate and since we still have frame render inconsistencies, the V-Sync works by showing the previously displayed frame instead of the newly rendered frame because the GPU wasn’t ready to deliver the next one during the 16.6 milliseconds refresh window. This induces frame stutters. It also increases input lag because the monitor has just repeated the previous frame instead of drawing the latest frame rendered by the GPU. The lower the framerate, the higher the stutters will be.

Now, regular full-on V-Sync is quite a dated technology and in the meantime, we’ve received other, similar ways for battling screen tearing and input lag. The most efficient and most popular ones are probably G-Sync and FreeSync. But, before these two, let’s talk about other ways you can take care of screen tearing that work on most PCs.

First, there’s the Adaptive VSync and Enhanced Sync, from Nvidia and AMD, respectively. They both work by keeping V-Sync on if the framerate is higher or equal to the monitor’s refresh rate. Quite handy for older games played on modern beasts like the RTX 3080 or the 3070. But in case you have a high refresh rate 144Hz 1440p or 4K monitor, chances are most newer games won’t be able to run at your monitor’s native refresh rate or higher. Dropping below the native refresh rate turns V-Sync off to reduce stuttering and input lag, but you’re left with screen tearing.

In other words, the monitor will not show all frames rendered by the GPU (for instance, every second frame if the refresh rate is 60hz and the game runs at 120fps), there’s no screen tearing and you also get reduced input lag. Great in theory. But in practice, enabling FastSync often leads to noticeable stutter. This increases as the framerate gets closer to the native refresh rate of the monitor. There are some makeshift ways to eliminate stuttering and get a tear-free experience but they aren’t applicable to all situations.

On the other hand, we have G-Sync and FreeSync. Both technologies, in theory, should eliminate screen tearing and stuttering by tying the monitor refresh rate to the framerate of the game.

G-Sync and FreeSync are two technologies from Nvidia and AMD, respectively, used for removing screen tearing without inducing stuttering or increasing input lag. Nvidia was the first to release the tech, back in 2013. For years, G-Sync was hardware-based. For it to work, a monitor had to have a G-Sync module installed. This increased the price, making adaptive sync quite an expensive way to game with low input lag and without screen tearing. The expensive entry ticket got discounted once VESA introduced adaptive sync to its DisplayPort 1.2a standard. AMD quickly developed FreeSync, its answer to G-Sync.

FreeSync is a software-based solution and at the start, was only usable on Radeon graphics cards. But due to the high price of G-Sync monitors and the fact that FreeSync implementation was free, Nvidia enabled VESA adaptive sync on its GTX 10 series and newer GPUs, allowing users with Nvidia GPUs to enable G-Sync on every monitor with VESA adaptive sync and FreeSync support.

What is shared GPU memory?

Today, we have multiple versions of G-Sync and FreeSync technologies, each iteration with its own set of features. Finally, there’s the G-Sync compatible branding, found on monitors with VESA adaptive sync tested by Nvidia. But even if a monitor isn’t officially G-Sync compatible, G-Sync should work fine on an Nvidia card if the same monitor supports some version of VESA adaptive sync.

Now, both technologies have limitations. Using FreeSync on an AMD card or adaptive sync on an Nvidia card imposes variable refresh rate limitations. For instance, if your framerate drops below the lower limit (usually 48 frames per second, but can go down to 30 frames on some monitors) you will experience screen tearing. The same thing happens if the framerate goes above the monitor max refresh rate.

Now, there are many ways to mitigate the upper threshold issue, but the best one is applying an FPS limit. This way, you’ll get adaptive sync goodies while in the monitor’s refresh rate range while an FPS limited (like the RTSS) keeps the framerate from going over the max refresh rate, and keeping screen tearing at bay. At the same time, you get the lowest input lag possible.

All you have to do is to download RTSS and set the FPS limit to about 2 FPS below the refresh rate of your monitor. This solution works great with most games but remembers that some games don’t like FPS limiters. If you find that a game is crashing or refusing to run while running a FPS limiter in the background, exit the limiter before doing any further troubleshooting.

As you can see, you can almost completely remove screen tearing by using adaptive sync in combination with a FPS limiter. Not only that, but you also get reduced lag and no stutter. And since even the budget gaming monitors these days support VESA adaptive sync standard, there’s no reason to not get a monitor with adaptive sync support if you already don’t own one.