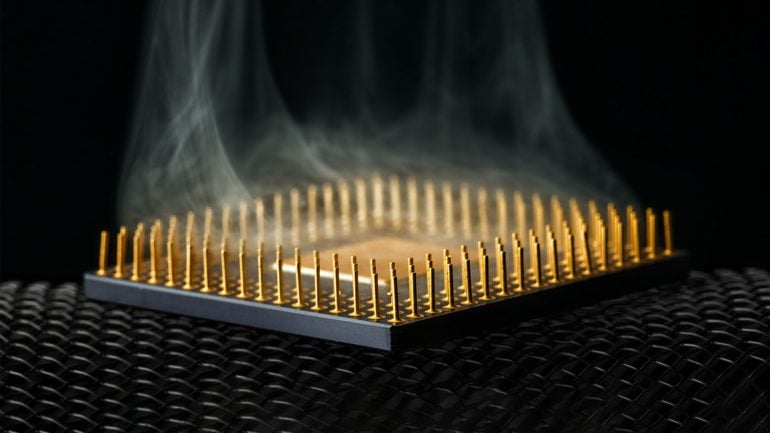 The AMD Ryzen 7 3700X and the Intel Core i7-9700K are only a step below flagship CPU offerings from AMD and Intel. Both are capable processors for any task you might throw at them and both cost a pretty penny. But which CPU is better? Let’s find out below.

First of all, let’s compare their raw specs. Let’s start with the Ryzen CPU. It’s an eight-core processor that supports hyperthreading, making it an eight-core/sixteen thread unit. The CPU works at 3.6GHz base and 4.4Ghz turbo frequency, which isn’t bad but isn’t anything mind-blowing. Intel has shown how fast mainstream CPUs can run when with its LGA 1200 processor series. When you cannot improve the manufacturing process and shrink the die, frequency stays your last way to improve performance.

Anyway, those eight cores spend a mere 65W of power, which is very low by today’s standards. This allows the 3700X to run on most B450 boards and on every B550, X470, and X570 motherboard out there. In other words, if you don’t need a beastly VRM and a ton of features you can pair this CPU with a budget board and get a pretty powerful all-around machine. Finally, the CPU has 32MB of L3 cache.

The 9700K is another eight-core CPU, but this one doesn’t have hyperthreading enabled. It’s a strange move by Intel, but they had to do that because the flagship model was the 9900K, which is an eight-core/sixteen threads design. This puts the 9700K in a weird place because both its predecessor (8700K) and successor (10700K) feature hyperthreading. An i7 without hyperthreading is plain weird to hear.

Finally, the 9700K can be slotted on a Z390 or a Z290 motherboard. You can also pair it with a budget B or H board but that would be a waste of its performance since it would be memory limited and unable to overclock. Design-wise, the 9700K has a higher working frequency and TDP while the 3700X features hyperthreading, and it you can pair it with budget motherboards without performance penalties. Now, let’s compare their performance.

3700X falls behind the 9700K when it comes to gaming benchmarks. The AMD CPU is about 10 percent slower than Intel’s offering on average at 1080p. At 1440p the margin gets much lower and, in most games, you won’t notice any difference between the two processors. And at 4K even the most powerful GPU becomes a bottleneck so there both CPUs should show exactly the same performance.

When it comes to productivity performance, the 3700X simply decimates the 9700K. The AMD CPU is about thirty percent faster on average, with the lead being even higher in a few selected benchmarks. Overall numbers are clearly on the side of the 3700X, which is a way better option for productivity tasks. No matter which work you’re doing on your PC, the 3700X is a better choice. And even if you’re a gamer who occasionally does work on their PC we would still recommend the 3700X.

You can pair both CPUs with any graphics card available today. They won’t impose a CPU bottleneck even when paired with the RTX Titan. We would recommend upper mid-range or high-end GPUs to pair with these two processors. Something like the RTX 2070 Super, RTX 2080 Super, or the RX 5700 XT. You can go with something more affordable in case you’re playing at 1080p. Something like the RTX 2060 (Super) or the RX 5600 XT.

When it comes to the memory, any 3200MHz kit with solid latencies (CL14 or CL15) should provide enough bandwidth for the either of the two CPUs. The Ryzen part could gain more performance by using even faster memory but you’ll have to pay a lot for only a couple of percents of a performance boost. It’s up to you whether that’s worth the investment or not.

Price and which one to buy

This is another department where the 3700X takes the win. On average, it’s about fifteen percent cheaper than the 9700K. Add the required aftermarket cooler for the 9700K and the price difference can go up to thirty five percent, which is a lot.

On the other hand, the 3700X can run with the provided box cooler. Thermals are fine but the noise can be pretty high. Investing in a budget or mid-range aftermarket cooler may be a wise investment. Even with an aftermarket cooler such as the Scythe Mugen 5 Rev.B or the Fuma 2 the 3700X stays a better deal with about twenty percent lower price. This price difference can mean getting a 2070 Super instead of the 2060 Super. Or getting an RTX 2060 instead of a GTX 1660 Super. In other words, you can get a much better GPU if you buy the 3700X instead of the 9700K.

Or hell, you don’t have the get a better GPU. Invest that money in a better PSU, or a flashier case. Or get 16GB more memory, that’s also faster than what you’ve planned on getting. You can get some major upgrades for the price difference between the two CPUs, which makes the 3700X an overall better buy. That’s a yes from us for people who game and work on their PC.

And the choice is even easier for people who use their PC for work. The 3700X is up to thirty percent faster in productivity loads and is cheaper. So yes, if you need a great CPU for work the 3700X is a much, much better choice than the 9700K. As for gaming, we would again pick the 3700X. Yes, the 9700K is faster but with new and more demanding games that advantage will melt thanks to the 3700X’s hyperthreading. Sixteen threads will work great with next-gen games. In a couple of years, the 3700X will be much better suited for modern games than the 9700K, which has eight cores but no hyperthreading.