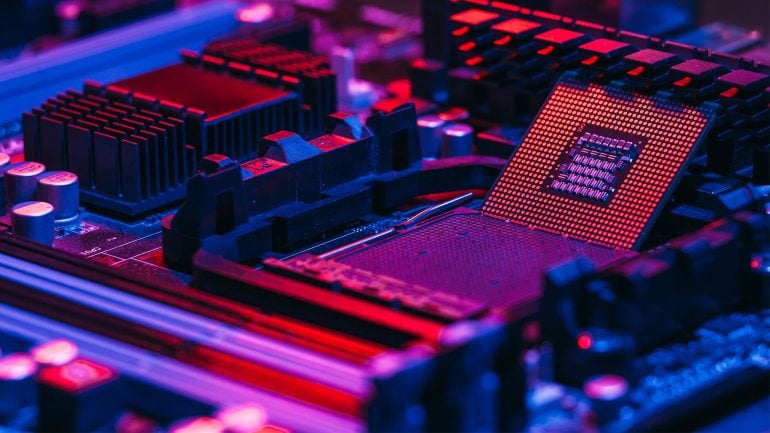 The B450 chipset and motherboards based on it are still a solid budget choice, even for Ryzen 5000 CPUs, as long as you’re able to find a board you want at its regular retail price. The combination of affordable price, solid set of features, and lots of models with VRMs quality enough to run some of the most powerful Ryzen CPUs makes B450 a sound choice for users on a budget, even in 2021. They aren’t as packed as newer motherboards, made for the latest and greatest CPUs, but many B450 boards can still get the job done.

If you want to learn more about motherboard form factors, do visit our ATX vs micro ATX vs mini ITX motherboards guide. If you’re interested in newer chipsets, we have lists of the best B550 motherboards and the best X570 motherboards you can visit.

The B450 Tomahawk Max from MSI is the best B450 motherboard for most users. It doesn’t have the absolute best specs, but it packs enough options to satisfy almost everyone.

If you’re a regular user who doesn’t need a ton of USB ports, multiple M.2 slots, multi GPU support, or stuff such as full RGB light show on your motherboard, the B450 Tomahawk is an excellent choice.

The board packs a relatively humble VRM by today’s standards. Despite this, it’s capable of running even the 3950X. Sure, the VRM will be pretty hot when overclocking the 3950X, but in all other scenarios, the B450 Tomahawk Max performs excellently.

As for the specs, this board packs six SATA III ports along with a single M.2 slot. It also supports DDR4 memory up to 4133 MT/s. When it comes to expansion slots, you have two PCIe x16, one of which works at x4, along with three PCIe x1 slots. Multi GPU support includes Crossfire.

The board also has a single gigabit LAN port, and the Realtek ALC892 governs the audio section. The rear panel hosts four USB 3.2 ports (one is USB-C), two USB 2.0 ports along with a selection of audio jacks, DVI and HDMI ports, and a flash BIOS button. Overall, this is an excellent board for the price, which is what made it so popular. 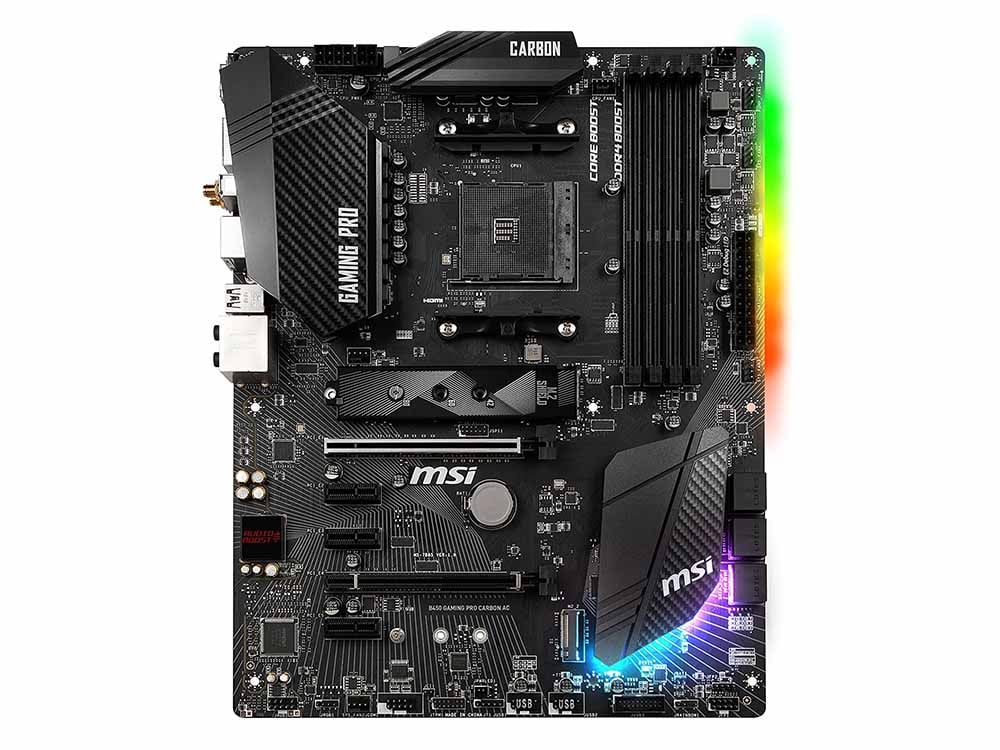 Aside from dual M.2 slots, this board also packs six SATA III ports. Expansion slots include two PCIe x16 slots, one of which runs at x4 along with three PCIe x1 ports. The board supports two-way Crossfire.

Memory support includes DDR4 3466 MT/s. And on the rear panel, you can find four USB 3.2 ports (one is USB-C), two USB 2.0 ports, HDMI and DisplayPort connectors, as well as a Flash BIOS button.

The MSI B450 Gaming Carbon can host any Ryzen CPU since its VRM is slightly better than the one found on the B450 Tomahawk Max. Overall, this is a great board and one of the rare B450 models that come with dual M.2 slots. 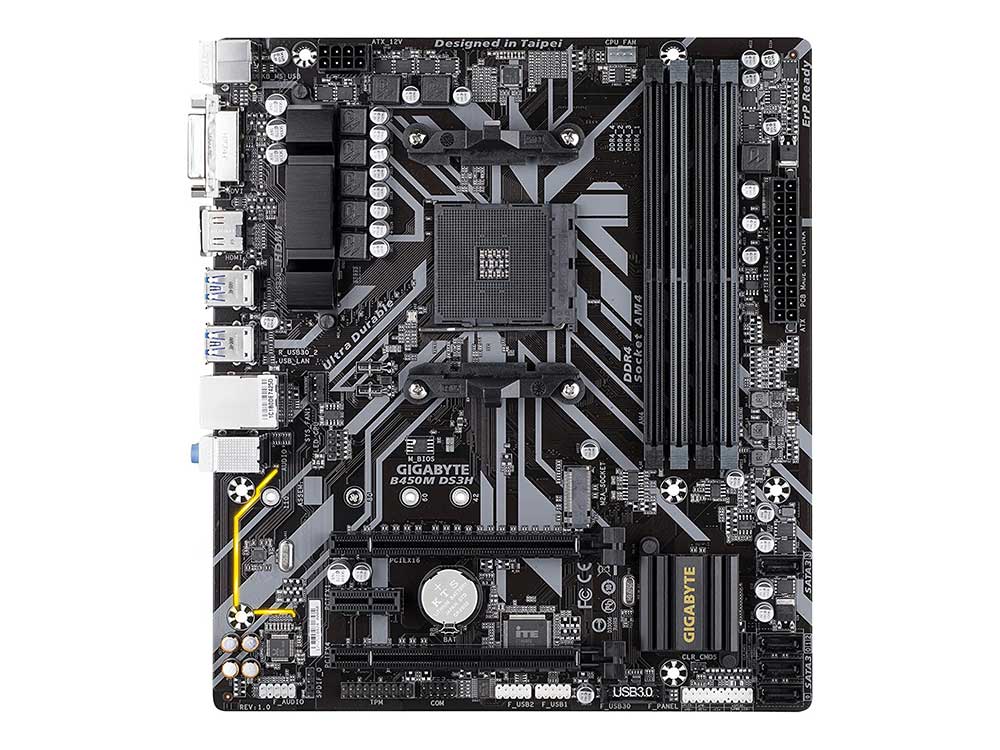 If you need a cheap B450 board that can host something like the 3300X or the Ryzen 5 3600, check out the B450M DS3H from Gigabyte. This is our pick for the best budget B450 board. The B450M DS3H is a simple and very affordable board that’s perfect for users looking for some basic board to host their Ryzen CPU.

This board can be a great cornerstone for a budget gaming build. It supports DDR4 3600 MT/s memory, packs a single M.2 slot, and offers four SATA III ports. You also get two PCIe x16 slots, one of which is running at x4 mode, along with one PCIe x1 slot.

Surprisingly, the board does support AMD Crossfire. The B450M DS3H also comes with one gigabit LAN port and an average audio section headlined by the Realtek ALC887 audio codec. On the rear panel, you’ll find four USB 3.1 ports, four USB 2.0 ports, and a combination of HDMI and DVI video outputs. 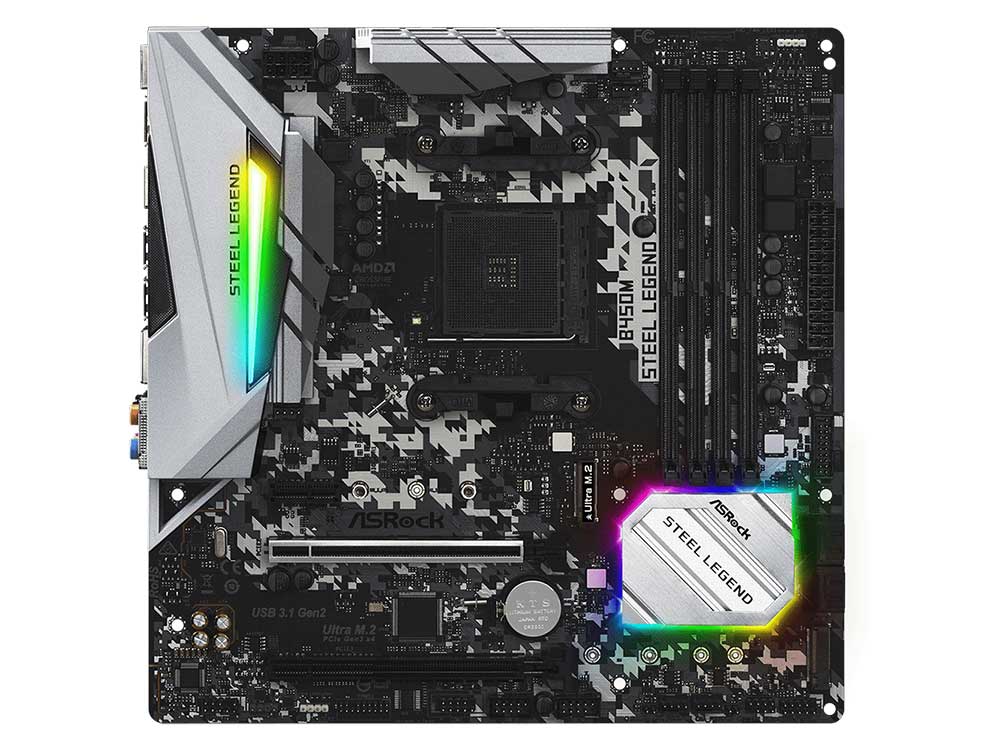 The mATX B450 motherboard offering isn’t great. You have a lot of dirt-cheap models that pack humble VRM units and a slim feature set. If you want a quality mATX board for your next Ryzen processor, we’re advising you to check out B550 mATX boards.

They aren’t perfect, but you can find a couple of models with great specs and excellent VRM for the price. If you want a B450 mATX board, you’ll have to get something like the B450 Steel Legend from ASRock. This is the best mATX B450 motherboard, but it’s far from being an excellent buy.

The board itself isn’t bad. It features the usual set of features you can find on a budget B450 motherboard. Stuff like a single M.2 slot and four SATA III ports. Two PCIe x16 slots, out of which one works at x16 while the other runs at x4 coupled with one PCIe x1 slot.

You also get a single gigabit LAN port alongside a pretty nice RGB placed on the backplate armor and around the edges of the chipset heat sink. This board supports DDR4 memory up to 3466 MT/s. On the rear panel, you can find six USB 3.1 ports, two USB 2.0 ports, a DisplayPort output, and one HDMI port.

Overall, this board’s pretty fine for regular users. Its VRM should be good enough even for something like the 3900X (just don’t even think about overclocking it), and there are enough features to satisfy those who don’t need a ton of connectivity options, Wi-Fi, or multiple M.2 slots. 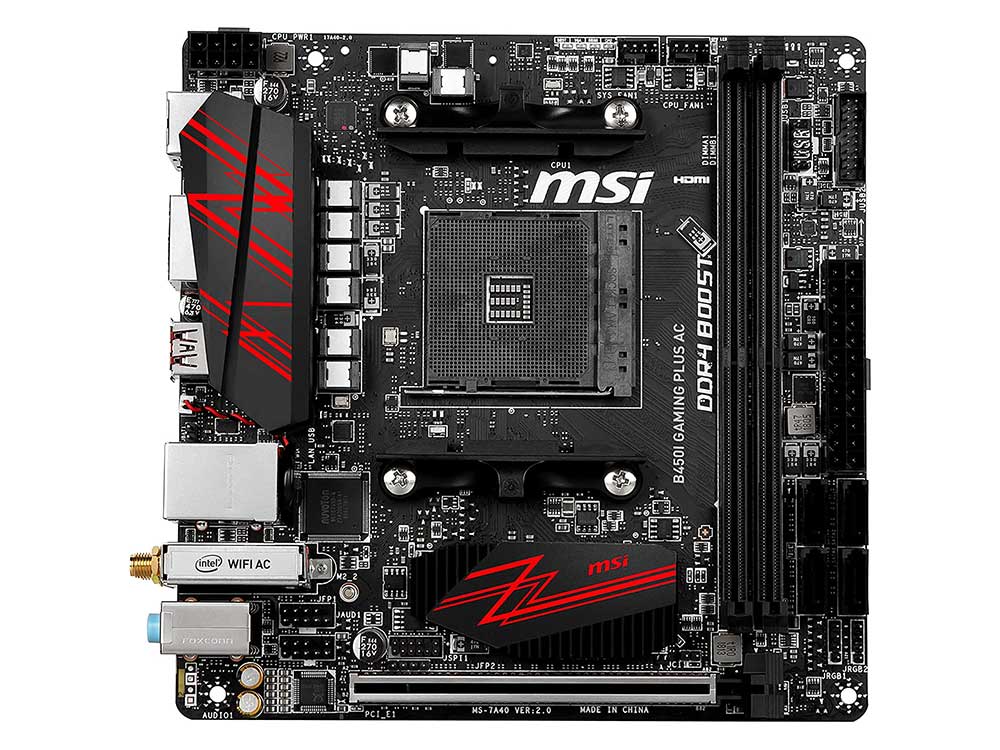 The B450I Gaming Plus AC took the throne of the best B450 Mini-ITX board solely for its VRM unit. It’s more powerful than on other B450 ITX models, thus allowing this board to host virtually any Ryzen CPU as long as it runs at stock clocks.

This board, aside from the solid VRM, also offers support for DDR4 memory up to 3466 MT/s, one M.2 slot, and four SATA III ports. You can also find a single PCIe x16 slot without multi GPU support. Connectivity options include Wi-Fi 5 chip with Bluetooth 4.2 support and a single gigabit LAN port on the rear panel.

The rear panel also includes four USB 3.1 ports, two USB 2.0 ports, an HMDI and DisplayPort, and a combination of audio jacks. Finally, the Realtek ALC887 Audio Codec supports 7.1-channel audio. However, this is a low-end solution that isn’t greatest for users who plan on using this board with high-def headphones.

Buying a B450 board instead of a B550 motherboard

AMD has released its new B550 chipset alongside a wide selection of B550-based motherboards. We’ve waited for the B550 chipset for quite some time, and now that it’s here, it’s clear the new chipset brings a plethora of improvements and new features over the B450.

First of all, PCIe 4.0 support is now present both in the flagship (X570) and mainstream (B550) chipsets. This could be a great way to future-proof your motherboard and get ready for the new generation of graphics cards. On the other hand tests show that even the RTX 3080 isn’t capable of completely saturating the good old PCIe 3.0 x16 slot.

This means that you should be fine with a PCIe 3.0 motherboard in the foreseeable future. If the flagship GPUs cannot use the PCIe 3.0 x16 bandwidth to their fullest, mid-range cards are even farther from doing that. Then you have the PCIe 4.0 support for SSDs.

This means faster transfer speeds, which can bring faster loading times than with SATA SSD in lots of games, as well as some asset-streaming optimizations, but just in a couple of titles (like the recently released Cyberpunk 2077). If you want to learn more about highs-speed SSD storage and whether you need an ultra-fast SSD check out our guide that asks (and answers) the question of whether is an SSD worth it for PC users.

That said, even the fast NVMe PCIe 3.0 SSDs look like they will be enough for any game coming out in the foreseeable future. In other words, you’ll most likely be fine in case you opt for a B450 motherboard.

The biggest improvement, aside from the PCIe 4.0, found on B550 boards are much better VRMs. Even the budget B550 boards have VRMs good enough to run literally any Ryzen CPU, which couldn’t be said about B450 boards.

But, they are also more expensive, with budget B550 boards costing the same as the best B450 models. Another interesting update is that now, most B550 boards have two M.2 ports instead of one. This can be useful to many users now that NVMe disks sport lower prices than ever.

Finally, while the B550 chipset got the exclusive rights for the Zen 3 CPUs, by now, most B450 boards have received BIOS updates allowing them to run new Ryzen CPUs. Future BIOS updates should also bring support for new OC features, like the Adaptive Undervolting.