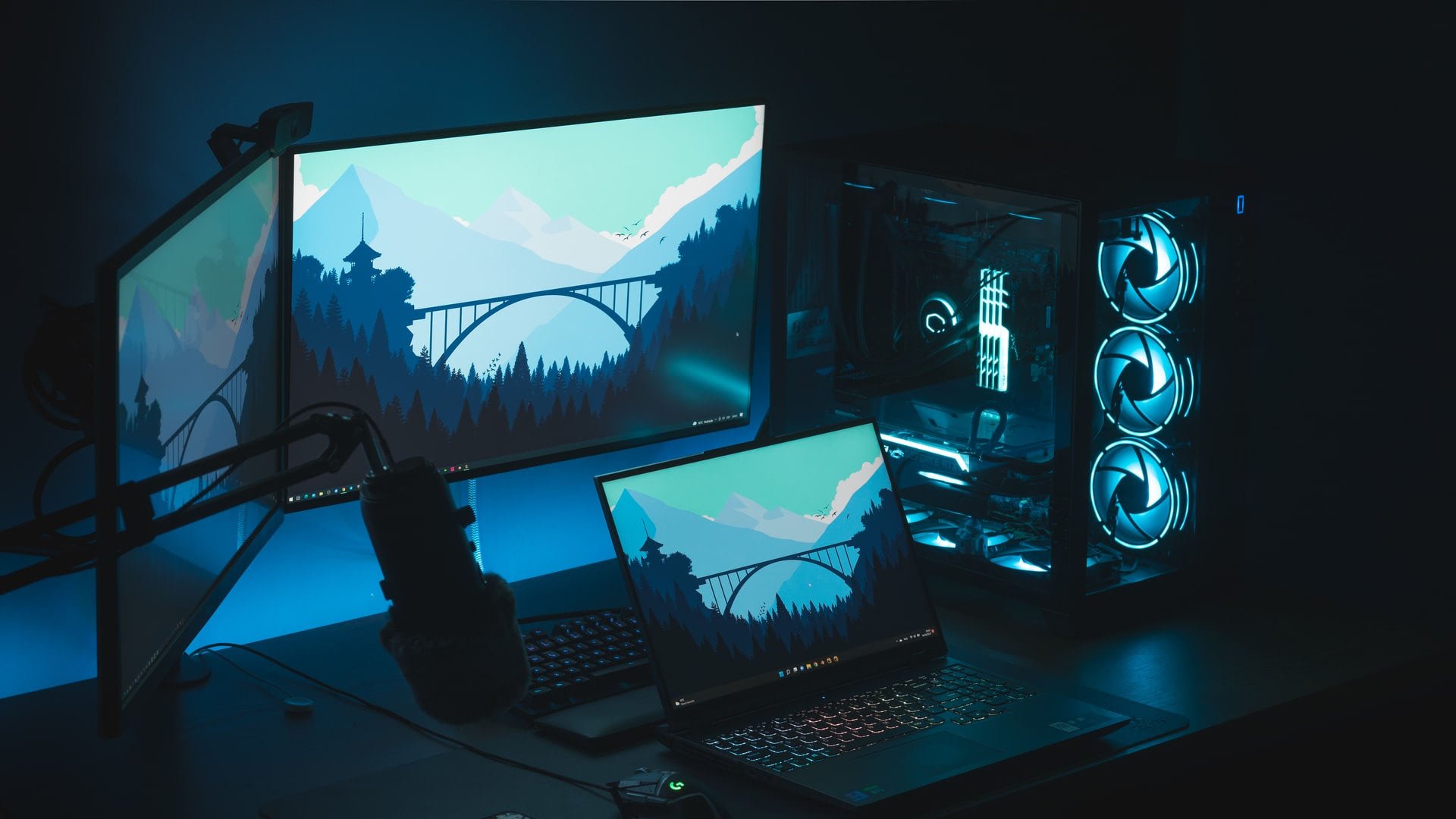 iBUYPOWER is a system integrator brand that sells prebuilt gaming PCs, which offer a range of prices and performance.

iBUYPOWER is a system integrator brand that sells prebuilt gaming PCs. The company offers a slew of custom gaming PCs in all shapes and sizes. From budget machines made for esports gaming to RTX 3090-powered beasts with monstrous gaming performance.

If you’re in the market for a new PC and don’t want to spend your precious time and energy on finding, buying, and then assembling the right components yourself, getting a prebuilt gaming PC is a real option. And if you’re interested in purchasing an iBUYPOWER prebuilt, you’ve come to the right place. Because here you’ll find the best iBUYPOWER Gaming PC. No matter whether you’re on a tight budget or have lots of cash burning a hole in your pocket, we have something for you.

If you’re in the market for a new gaming PC, let us share some articles we recommend checking out. First of all, read our lists of the best prebuilt gaming PCs under $1000 and the best ASUS gaming PCs. We also advise everyone planning on upgrading their PC to read our guide for the best IPS monitors. You’ll find plenty of great gaming monitors there. 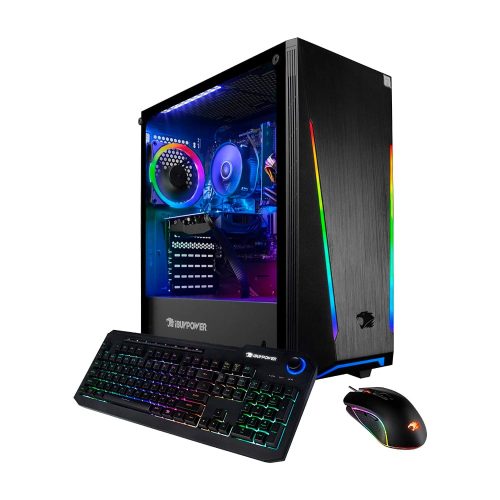 Let’s start with the budget segment, and we mean proper budget. The iBUYPOWER Trace 9100W can be yours for less than $600, and you’re getting a pretty solid entry-level gaming PC for the money. The Ryzen 3 3100 CPU is more than a decent budget CPU that can tackle any current game without hitches or stutters. Better still, you can upgrade it later for cheap since all AM4 motherboards now support Ryzen 5000 CPUs.

Next is the Radeon RX 570 (4GB version), an older GPU that still has some juice in it. While not great for the latest AAA games, you will still be able to play them with low visuals. As for the older games and esports titles, they will perform great in 1080p resolution. Just don’t forget to set textures to low or medium (in older titles) since it only has four gigs of video memory.

Now, eight gigs of single-channel memory is less than ideal. We recommend selling the 8GB stick included in this PC and getting a 16GB memory kit or an extra 8GB of memory and slapping it in there. Finally, a 120GB SSD isn’t a lot, but it should be enough for the OS and a few of your most played games. At least you’re also getting a 1TB HDD, which should be roomy enough to store dozens of games. 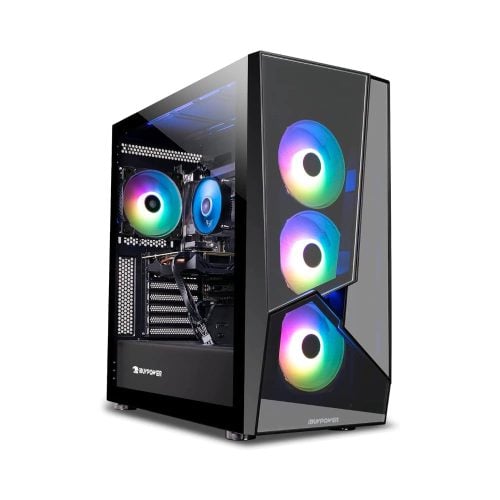 Anyway, this is a decent 1080p GPU capable of running the latest and greatest AAA titles on high settings and 60fps. On the other hand, you can play older games with ultra details and higher frame rates. Esports titles, of course, will work flawlessly on this PC.

Now, 8GB of single-channel memory is always a negative, so we recommend either getting an extra stick of memory or buying a 16GB memory kit and installing it inside the PC right after buying it. 16GB of dual channel memory will give you a stutter-free experience and will notably increase your frame rates. If you’re only playing esports games, on the other hand, try playing a few of your favorite titles with 8GB of RAM first. If the experience is satisfying and without hitches, skip this step.

Storage-wise you’re getting a 480GB SSD here. Not great, considering there’s no hard drive, but not that bad since 480 gigabytes of storage should be enough for all games you’re currently playing. Unless one of those games is CoD: Warzone, of course.

Moving up a notch we have the best iBUYPOWER Gaming PC under $1500 you can get at the moment. The iBUYPOWER SlateMono 230A is a pretty good deal, even if we look at the wider prebuilt gaming PC market. A Ryzen 5600X coupled with an RX 6600 XT and 16GB of RAM is a pretty solid 1080p & 1440p combo no matter which games you play.

AAA titles will run over 60fps at 1080p and around 60fps at 1440p with ultra settings. Pretty good performance considering the price. Some system hogs (Watch Dogs Legion, Cyberpunk 2077) will have to have some visuals cut to high or medium for 60fps in 1440p, but overall, you’ll be able to play most games with zero graphical compromises. Multiplayer titles, of course, will work great no matter the resolution.

As we already said, the SlateMono 230A comes with 16GB of dual-channel memory, which is just right at this price point. The storage situation’s much better here than with the previous pick since now you’re getting a 1TB HDD in addition to a 480GB SSD. In other words, you shouldn’t worry about storage for the foreseeable future. 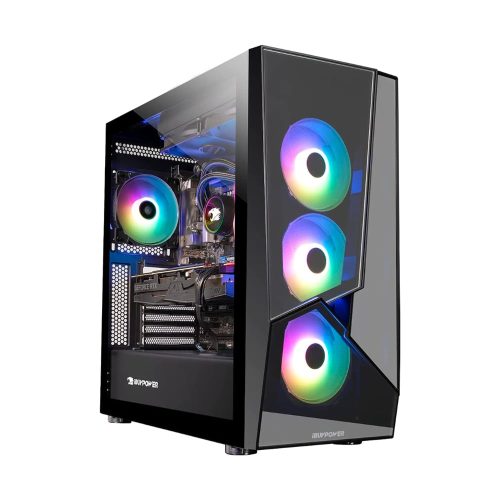 Now, Nvidia GPUs are selling at a premium compared to AMD graphics cards, and our best iBUYPOWER Gaming PC under $1500 pick with Nvidia GPU doesn’t offer as much bang for your buck as the AMD version. Still, the CPU here is faster, so at least that’s great. Instead of the Ryzen 5600X, the iBUYPOWER SlateMR 236i comes with a Core i5-12600KF, the best bang-for-buck gaming CPU at the moment. The 12600KF is almost as fast in games as the 12900K and the 12700K while costing just a fraction of the price.

The CPU is cooled with what looks like a 240mm AIO, which should be more than enough for the 12600KF. You can expect great thermals, even inside a hotbed that is the case used here. The GPU here is the RTX 3060. The RTX 3060 isn’t a bad graphics card, but it’s a bit slower than the RX 6600 XT. On the flip side, the Nvidia GPU comes with ray tracing and DLSS support, and the latter should be pretty useful if you’re gaming in 1440p resolution.

Performance-wise you should expect more than 60 frames per second in 1080p with ultra details and around 60fps in 1440p with ultra-high visuals. DLSS can significantly help you achieve smooth, 60fps performance in more demanding games (WD: Legion, Cyberpunk 2077, Dying Light 2, etc.), which is a big plus for Nvidia card compared to the RX 6600 XT. On the flip side, more and more games are getting AMD FSR 2.0 support, but overall, DLSS is present in a much greater number of modern titles.

The rest of the specs here is usual for this price point. 16GB of dual-channel memory is just right for gaming, and a 500GB SSD + 1TB HDD combo offers plenty of storage no matter how many games you might play at the same time. There’s also the case that looks like it has zero airflow and that packs a truckload of RGB case fans. 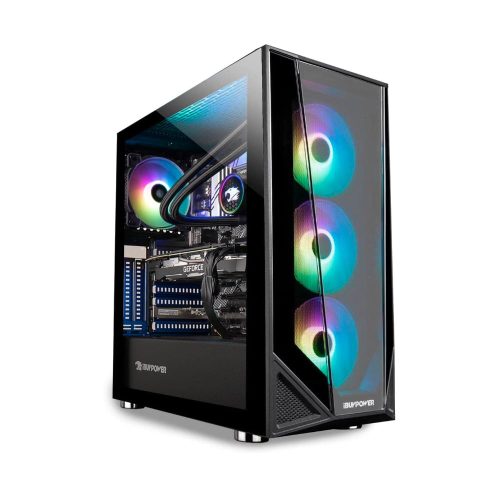 If you want the best iBUYPOWER Gaming PC without spending a fortune, take a look at the Trace5MR 193a. This prebuilt PC packs an RX 6800 XT, which is one of the fastest graphics cards you can get today. The 6800 XT is enough for high-refresh-rate 1440p and 60fps 4K gaming with ultra settings. Drop visuals to high, and your frames should hit triple-digit values, even in 4K. The only section where the RX 6800 XT lacks is ray tracing performance.

The CPU here is a liquid-cooled Ryzen 5900X. This is one of the fastest gaming CPUs out there and also a pretty good choice for professionals who need lots of CPU power for video or photo editing. This CPU and GPU combo should be more than enough for any AAA game that might come out in the next couple of years. GPU thermals might be too high for comfort, though, since the case is yet another example of system integrators not giving a flying cuck about airflow and thermals.

The Trace5MR 193a comes with 16GB of dual-channel RAM, which is fine for high-end gaming in 2022. That said, we’d like to see 32 gigs of memory at this price. Also, games such as MS Flight Simulator can use more than 16GB of memory, another reason why prebuilt gaming PCs rocking high-end GPU and CPUs should come with more than 16GB of RAM. Last but not least, you’ve also got 1TB SSD. Again, not bad, but a 1-2TB HDD on top of the SDD would be nice at this price point. 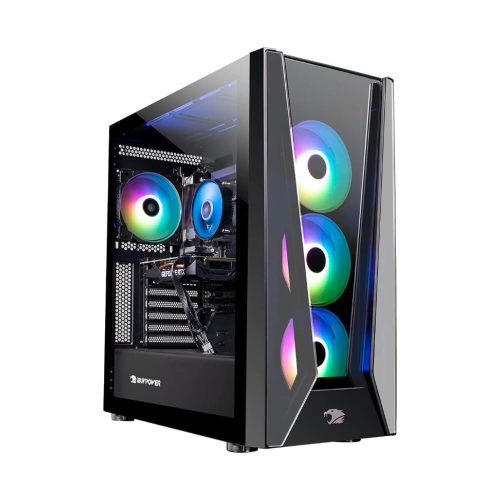 The 5600X offers 95 percent of the 5900X’s gaming performance, and it won’t bottleneck the RTX 3080, even in 1080p. Even better, the CPU is liquid-cooled. And since liquid cooling is overkill for the 5600X, you should expect cool and extremely quiet performance from the CPU.

Now, the AMD-powered Trace5MR 193a should be faster in 1440p, while the RTX 3080 should be faster than the RX 6800 XT in 4K. On top of that, the Nvidia GPU has a much better ray-tracing performance. If you want ray-tracing effects in your games, get this PC. DLSS support should also notably boost 4K performance, another reason to get this PC over the AMD one despite it coming with a faster CPU.

Another ace in the RTX 3080 Trace MR’s sleeve is 64GB of memory. Overkill, sure, but much better than 16GB seen on the Trace5MR 193a. Finally, 1TB of SSD storage is fine, but, again, we’d like to see a 1TB or 2TB hard drive on top of the SSD. At least you’re getting more than 16GB of memory, so it’s something. 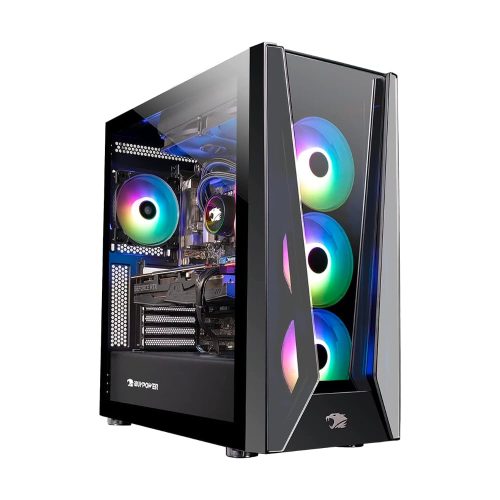 Last but not least, we have the iBUYPOWER TraceMR 252i, the best iBUYPOWER Gaming PC you can get, hands down. This beast features a Core i9-12900KF coupled with an RTX 3090. In other words, get this PC if you’re after the highest gaming performance and don’t care about the price. You’re getting the fastest gaming CPU on the market along with Nvidia’s second-fastest gaming GPU. Now, the RTX 3090 Ti is technically faster, but the difference between the two is minimal.

This combo will run any AAA game with ultra settings and high refresh rates. DLSS support is very handy in 4K resolution. Using DLSS in 4K will allow you to play games such as Cyberpunk 2077 with all ray tracing goodies and 60 frames per second. If you’re looking for a monitor to pair with this beast, we recommend checking our lists of the best 4K 144Hz monitors and the best 1440p 240Hz monitors.

The rest of the specs looks fine. For instance, while a 240mm AIO should be enough to cool the 12900KF during gaming, it might not be enough if you’re planning on using the CPU for rendering or video editing. Especially since iBUYPOWER decided to put the system inside yet another case with zero airflow.

Next, while 32GB of memory is more than enough for any kind of gaming, 64GB would be better. At least you’re getting a 2TB hard drive along with a 1TB NVMe SSD. Again, if you want the best of what iBUYPOWER offers, the TraceMR 252i is the gaming PC for you.