Looking to change your game up without too many complications? Check out some of the best Minecraft data packs 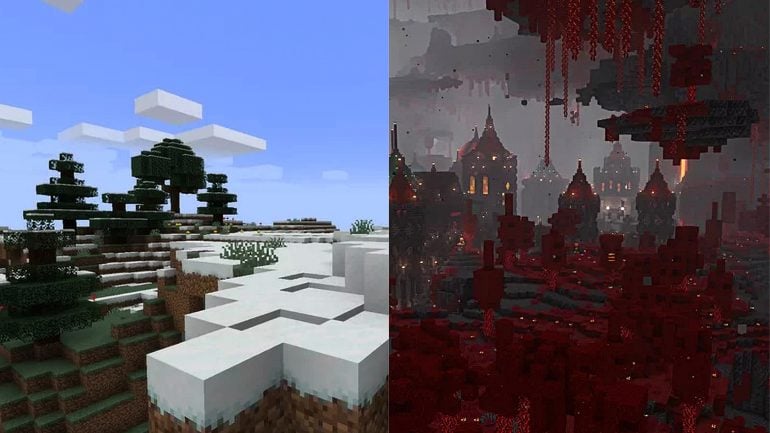 Everyone loves a good Minecraft modded adventure. The scope of mods that the community has come up with over the years is incredible, and each mod is unique while changing the game’s dynamic. But an often overlooked addition to the game is data packs, which are simple changes to your game to change how you play.

Today we’re going to be talking about the best Minecraft data packs. These packs are very easy to install and serve as very small modifications to your game, most often in the view of quality-of-life updates. If you’re ever looking for a fresh Minecraft experience but don’t want to go through the process of installing a whole mod, consider a data pack.

While data packs are a fantastic way of sprucing up your game, you can’t deny that a good old mod adventure is always welcome. We always encourage players to try out many different mods for fresh experiences. Check out the best Minecraft modpacks and the best Minecraft PE mods!

You know that annoying feeling when you’re in dire need of wood and you have to cut down an entire tree just for there to be one block left at the top and then you have to build your way up just to get that last one so the leaves go away eventually? Of course you do, everyone has this problem. With TreeCapitator, every tree will fall down in its entirety along with its leaves just by cutting the base log. It’s an incredible data pack that every player would appreciate.

Advancements are usually an addition that’s most common to big modpacks that have a lot to explore. However, even when you’re just playing the vanilla version of Minecraft, it’s good to have a sense of direction and goals to achieve. BlazeandCave’s Advancements adds an entire table of achievements to aim for as you play. They are all related to in-game achievements like mining, exploring, brewing, fighting, and much more. Overall, we highly recommend this data pack if you want to have a full overview of all your Minecraft goals.

Many people have regarded the Nether as a bit limited compared to the overworld, and the developers came up with the Nether update which adds some more biomes and mobs to the Nether so it’s worth exploring. However, if you’re still not happy with the scale of the Nether, consider Incendium. This data pack completely revamps the Nether, turning it into a massive hellscape that is packed with content to explore, things to fight, and places to discover.

Finding a structure like a village or a temple in Minecraft is one of the most satisfying things because you’re running into free resources and stimulating your adventure drive. Dungeon Now Loading is a fantastic data pack that adds 10 unique structures like villages, castles, dungeons, and more. Many of these structures have unique bosses attached to them along with the fantastic loot inside. This data pack adds another layer of adventure to the base game without drastically changing your gaming dynamic.

The standard overworld in Minecraft is great since it has a lot of depth and content, but sometimes you just need more. William Wythers’ Overhauled Overworld takes all of the basic biomes and gives them more life and atmosphere, making exploration feel fresher. On top of improving the basic biomes, this data pack also adds new biomes that are quite creative and interesting for all players.

RPG elements are a common base people use to make the best Minecraft modpacks and the best Minecraft data packs, mostly because people love the sense of adventure they provide. This data pack in particular changes Minecraft a bit more drastically than other entries we’ve mentioned since every mob now has a class that ranges from Veteran to Raid Boss. Likewise, items have a random chance to drop with special stats that range from Uncommon to Legendary. It really appeals to all players who love adventure!

There isn’t much to say about this data pack other than that it’s insanely useful and practical. Each mob has a health bar above it that shows you exactly how much health it has so you can plan your attacks accordingly. This is especially useful against aggressive, large mobs that are hard to kill.

This is like TreeCapitator, but for ores. It alleviates all of the annoyance you encounter when mining in the depths of the world, allowing you to clear entire veins of ore by breaking one block. The way it works is that you’re only able to break entire veins by holding Shift while breaking the block. It is incredibly convenient and such a cool design! We highly recommend this data pack if you’re looking for some improvements to spelunking.

Moving on, we have another cave diving pack that moderately improves the caves in your world by adding two new cave biomes along with some interesting changes. This is great for players that love exploring the depths of the world and want to add more depth to their own world. Veinminer is a good combination with this data pack!

And finally, we have Moar Swords, a data pack that adds dozens of new swords to Minecraft for you to use in your monster-slaying adventures! Just as you might expect, each sword has a unique effect attached to it. These effects range from simple damage increases to completely unique effects like teleportation, explosions, curses, and much more. This is one of the best Minecraft data packs for players that like combat and the thrill of monster hunting!

And there you have the best data packs in Minecraft! These packs are awesome because each of them is unique and improve your game without any drastic changes. If you’re ever looking for more games to play, we recommend you take a look at some of the best tank games, best naval games, and the best free PC games!