What is VRAM and how much do I have? 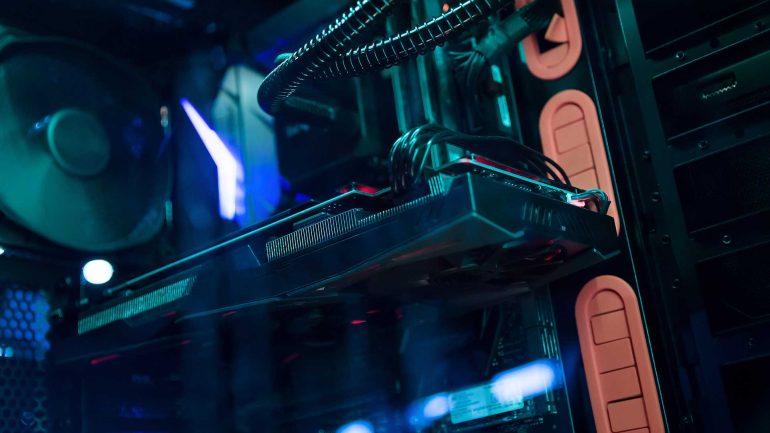 VRAM or video memory is used for storing image data, data needed for your monitor to display the image. If you have a discrete GPU, you have a certain amount of fast VRAM on your graphics card’s PCB. This is a preferred way of storing image data because, while VRAM and system RAM share the same memory technology, VRAM is much faster than RAM. There are also other differences between the two.

If your graphics card’s memory buffer gets full, a game or an app will start storing excess image data in your system RAM. This degrades performance massively. It’s because you’re mixing very fast and very slow memory (relative to the speed of your graphics card’s VRAM). So, while an operating system can always use up to half of your total RAM in case your VRAM buffer gets full (this is called shared GPU memory), the performance degradation when using RAM in place of VRAM is so high that you shouldn’t count the reserved RAM as VRAM. In other words, if you have a dedicated graphics card, your total VRAM is only the amount of memory found on the graphics card.

If you have an integrated GPU, the GPU doesn’t have dedicated VRAM. Since the CPU die hosts both the CPU and the iGPU, there’s no place to put dedicated VRAM there. So, every iGPU has to use system RAM as its VRAM. In other words, integrated GPUs can only use shared GPU memory.

That means lower memory bandwidth than on virtually every modern graphics card. It’s because even the fastest DDR4 RAM sticks (current standard) are still way behind even the GDDR5 VRAM standard. And GDDR5 memory was used on graphics cards from two generations ago.

While all VRAM on current graphics cards is based on DRAM (dynamic random access memory) technology (GDDR5, GDDR6, GDDR6X) some cards use a tweaked version of the tech called HBM or high bandwidth memory. HBM chips are vertically (or 3D) stacked, which allows them to use less power but have much higher memory bandwidth than GDDR DRAM chips. HBM standard has lots of positives, but it’s still too expensive to become mainstream.

How much VRAM do I have?

Finding out how much VRAM you have is very simple. If you have a discrete (dedicated) GPU, just download GPU-Z, and open it. There you’ll find the “Memory Size” window that shows the total amount of your dedicated VRAM. You still have half of your system memory reserved as shared GPU memory. But since filling your graphics card VRAM buffer leads to massive performance drops, just disregard shared GPU memory when calculating the size of your VRAM.

If you have an integrated GPU, the maximum amount of your VRAM is half your system memory. This is a dynamic number because the system will use different amounts of RAM for video memory purposes depending on the situation. If you’re using a browser or Microsoft Word your GPU is idle most of the time so the system uses just a couple of hundred megabytes of your RAM as video memory. But if you’re playing a game, this amount will get higher, up to half of your total system memory.

If you want to know the exact amount of your VRAM in case you have an iGPU and use Windows 10, open Settings then go to System->Display->scroll down to Advanced display settings and then open Display adapter properties for Display 1. Then, look at the amount of total available graphics memory you have, that’s your VRAM size. Disregard dedicated video memory since, as we already said, iGPUs don’t have dedicated VRAM. Check out our VRAM usage guide if you want to know how to monitor your VRAM usage in real-time.

Can I increase my VRAM size?

In practice no, you can’t. While some users claim you can increase the amount of VRAM and improve performance if you have an iGPU, these techniques can only lead to potential performance drops. You see, both Intel and AMD integrated GPUs reserve very low amounts of RAM when idle but when under load they will have no issues using more RAM depending on the type of application, up to half of your total RAM.

In other words, while the iGPU is idle, almost all of your system memory is free. iGPU will use system memory only when needed, like when playing a video game. But if you go into BIOS and tweak DVMT Pre-Allocated (Intel chipsets) or UMA Frame Buffer Size (AMD chipsets) settings so that your iGPU reserves more system RAM by default, the iGPU will reserve that RAM even when idle. You’ll only decrease the amount of system memory available when the iGPU is idle, which can lead to performance drops in certain apps.

For instance, if you have 8GB of total RAM and reserve 2GB of system memory for your iGPU in BIOS, those two gigs of RAM will become unavailable as system memory. You’ll drop from 8 gigs of RAM to only six. But if you don’t change the aforementioned BIOS settings, iGPU pre-allocated size will be much smaller (128MB by default on most iGPUs) and you’ll be able to use all of your RAM if the iGPU doesn’t need it. And since most operating systems are great at automatic memory management, the performance difference between, let’s say, 128MB and 2GB of pre-allocated memory will be zero.

You should increase pre-allocated memory size only if you run a certain game or an app that flat out refuses to launch. Some games don’t work well with iGPUs so they cannot recognize the maximum amount of shared GPU memory, only the amount currently in use. So, if you encounter this, go into BIOS and increase reserved memory to the max. Just don’t forget to switch back after you finish the said game.

And if you have a dedicated GPU, maybe you’re thinking about reducing the amount of shared GPU memory. Well, just don’t. That RAM isn’t reserved, and the system won’t use it until your VRAM buffer gets full. And you won’t get improved performance by decreasing the setting. The only thing you can get is certain games and apps crashing as soon as they fill your dedicated VRAM buffer in case you’ve decreased shared GPU memory to zero or close to zero.