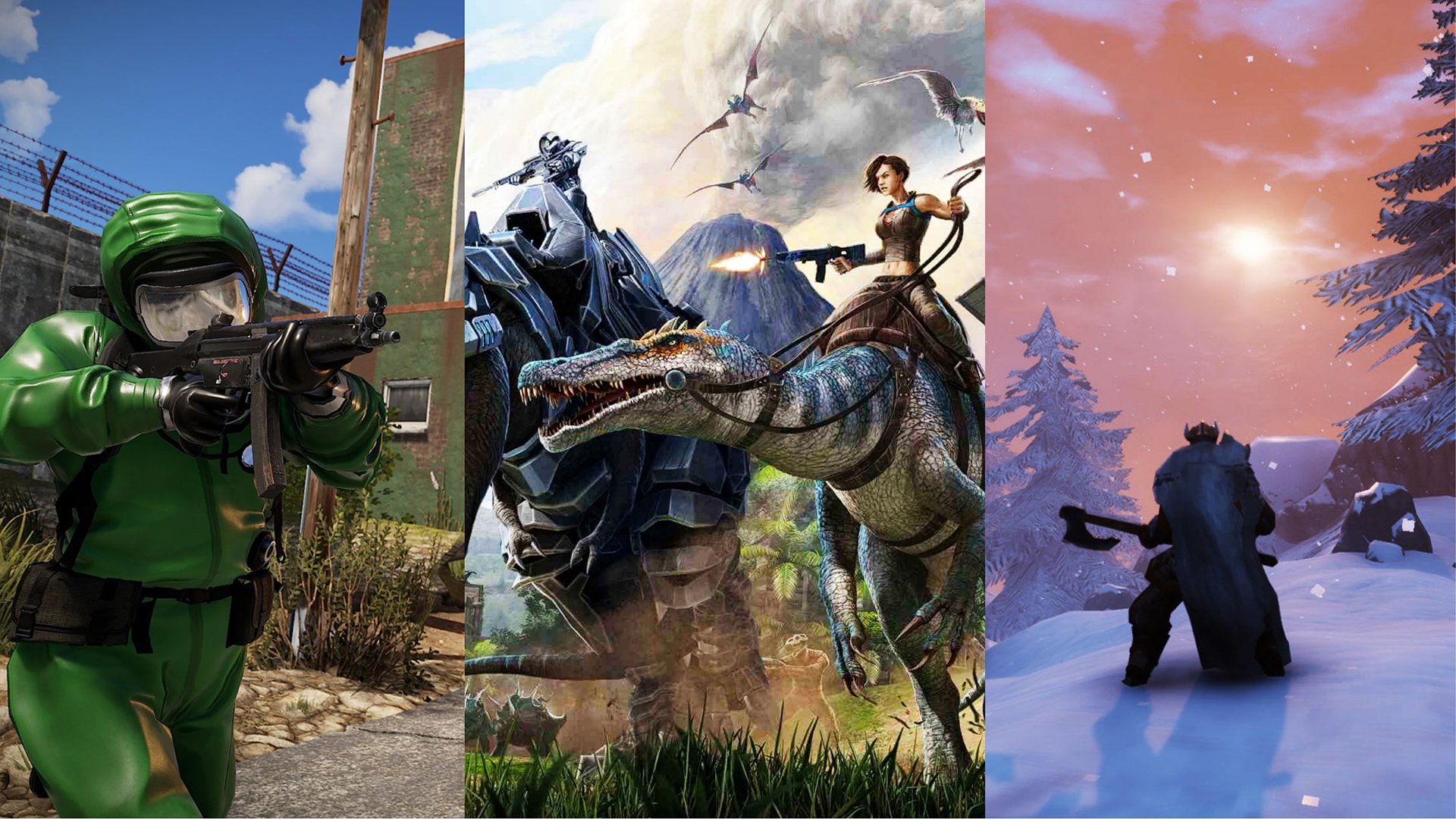 Best survival games to play in 2023

Here are some of the best survival games you can jump into right now!

Survival games are excellent when you want to get thrust into a merciless world with nothing to defend yourself with, relying only on the land and the natural resources to craft supplies, weapons, and shelter so you can survive. The whole genre of survival games is immensely popular with many players today, as these types of games are extremely well-designed to account for many different factors that can occur randomly in nature, adding to the immersion.

When it comes to the best survival games, there is a lot to choose from. They all vary in complexity depending on what is asked of you in the game, so you can choose whatever best suits your interests. Whichever way you look at it, these games are guaranteed to give you a wonderful experience.

Some of these games also have multiplayer features so you can enjoy the struggle with your friends. Speaking of friends, you might want to take a look at our best multiplayer games article if you are looking for those in particular, as well as our best .io games article for a simpler multiplayer experience!

Rust is a multiplayer-only survival game where you are placed in a massive open world to interact with other players in order to survive. You start with nothing, picking up rocks to chop down trees, progressing that way. What makes Rust one of the best survival games is the fact that you can never know what the intentions of other players are. Some might be friendly and help you, while others can deceive you to steal your resources. If you manage to find your ideal squad of players to cooperate with, you can expect to have a lot of fun scouring the land for resources to improve your buildings and establish dominance. It had its full release in 2018 and it still continues to be a phenomenal game that many players enjoy.

This game is very popular when you want to play either solo or with a friend. In The Forest, you start in a plane that has freshly crashed on a random peninsula in the middle of nowhere. Everyone is dead except for you and your son, Timmy, who has mysteriously vanished. Finding your son forms the basis of the game, and the road to finding him is paved with intense survival scenarios, where managing your hunger, thirst, fatigue, and resources are extremely important. Players can loot the environment to collect the resources they wish as there is a ton of crafting options to choose from. This game is set in a classic environment that the best survival games should take away from as well.

Speaking from a functionality standpoint, Don’t Starve is one of the best survival games ever. In the game, you take control of one in a long line of characters, each with their own distinct benefits for survival. Once you make your selection, you are placed on a large map full of creatures and resources, all shown in a top-down perspective. What makes this game fun is the different approach to gameplay, where it plays more like an RTS instead of a survival game. Crafting is interesting as it has natural progression as you explore the world more. As you play, you will find many different enemies, as well as special events that can happen, such as teleportation, magic, NPC encounters and so much more, should you choose to play.

You can’t really make a list of the best survival games without mentioning the GOAT of the genre — Minecraft. Minecraft is a game where there is no exactly determined goal, as you can play the game as long as you want, not even having to get to the end at any point. There is a tremendous amount of detail in this game, something you will see once you get going. Even though there isn’t a defined goal, you can still get achievements as you progress through the various stages of the game, so there is a sense of accomplishment there. There is a fair amount of enemies that only come out at night, with some burning up during the day. Through the years, Minecraft has proven that you do not need flashy graphics to create a fantastic experience for everyone involved.

Imagine everything that Minecraft gives you, but it is converted into a side-scrolling open world where there is a lot to discover. Terraria gives you the opportunity to freely explore the entire world in an adventurous fashion, crafting your own supplies with whatever resources you find. The progression system is very similar to Minecraft, albeit you have many new weapons and tools that are more flashy than standard ones. One of the most interesting features of Terraria is the bosses. While playing the game, you can trigger certain bosses to spawn if you meet some fairly specific parameters. These enemies are extremely dangerous and their attacks are completely wild, leaving you with little room to defend yourself. If you’re a fan of the best survival games that include some simplicity, while still retaining functionality, then Terraria is for you!

Subnautica is one of the best survival games out there. While other games follow the classic template of staying on land and using natural resources, Subnautica takes a different approach, opting to integrate all of the gameplay into the open seas. There are a lot of resources to dig up below the water, as well as many different species of fish to discover. Utilizing the natural resources of the minerals you find, as well as certain fish, you can create complex machines and tools to help you along. You do all of this while simultaneously managing your health, hunger, and thirst so you don’t die. All of these factors combined with the interesting storyline create a wonderful experience that is guaranteed to give you hours of fun!

This is a newer release that has caused a lot of excitement in the gaming community. In Valheim, players assume the role of dead Vikings who have to prove themselves before they can cross into the afterlife and feast in the grand halls of Valhalla. While in the realm of Valheim, you can work together with other Vikings to craft supplies, shelter, and weapons to defend yourselves against various enemies that spawn on the map. Speaking of the map, it is a massive one that is procedurally generated so you are guaranteed to never have a dull moment. Something that you might notice about this game is that it features lower-quality graphics than other games released in the same year, and that is because games with lower-quality graphics tend to focus more on the quality of gameplay, leading to the improvement of your overall experience. This game serves as evidence that you do not need next-gen graphics to produce one of the best survival games.

Playing the best survival games with your friends is one of the most interesting and fun things you can do, and Raft is one of those games that provide an amazing experience at all times. Of course, you don’t need to include your friends in this game if you don’t want to, but friendly banter and a tactical approach can greatly improve the situation. In Raft, you are placed on a 4×4 platform floating in the middle of the ocean. You start the game with just a hook on a rope, using which you can fish resources that are floating around to you. Using these resources you can expand the raft as much as you want, building various improvements to help you traverse the open waters. Getting deeper and deeper into the game can lead to you even creating insanely complex things like engines. Yes. Engines. There is so much to explore in this game, so jump in and test the waters yourself!

ARK: Survival Evolved is an open-world game that has all of the same survival elements as other games, except the whole experience is deeply enriched by the presence of dinosaurs on the map. Dinosaurs are awesome, and wandering naked in the wilderness while constantly worrying about getting eaten by a giant lizard is even better! In this game, you have to use the resources provided in the world to create a livable environment. Since one of the core aspects of the game is dinosaurs, you also have the ability to tame them so you can use them for fighting and traversing the huge map. There are over 170 different creatures you can encounter in the rich world, some of which are inspired by mythical creatures alongside historical ones. Even though this take takes some detours from classic survival games, you can still call it one of the best survival games.

This is one of the best survival games that has a massive amount of complexity added to it. You play as a survivor of a storm lost in the freezing Canadian wilderness searching for a way to get back to civilization. The immersion in The Long Dark is some of the best in the business because you have so many factors to take into account should you choose to play on Survival mode. Things like hunger, fatigue, windchill, and thirst become a regular occurrence that you have to constantly keep an eye on lest you want to die a painful death. The map in this game is divided into segments with their own names and characteristics, so starting in one area is not going to be the same experience as starting in another one. No matter which area you select, you are free to expect a great experience that is as close to a perfect survival situation as you can get.

Now you can get your pocketknife and some rope and dive into one of these fantastic games! As you can see, not every survival game follows the same tropes that make it look like every other survival game in existence, but that doesn’t stop them from being the best survival games. One of the most defining factors of this genre is the openness of the worlds they’re set in. If you want to embark on an open-world adventure with no limitations, then take a look at our best open-world games article!