How to play carrier in World of Warships — explained

Conquer the seas with these tips and tricks to mastering airship carriers. 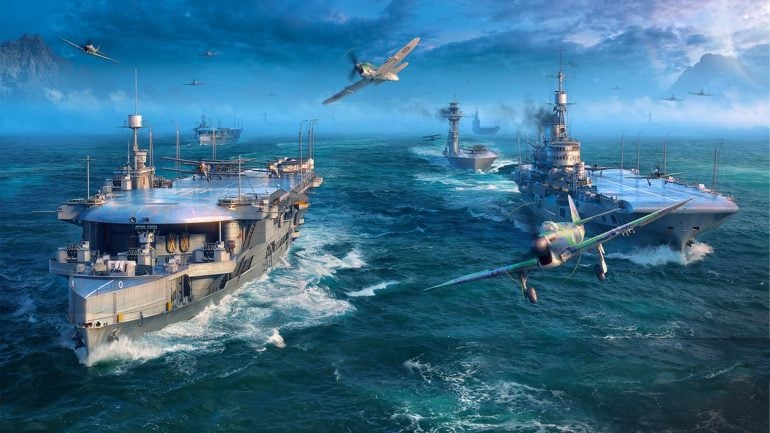 The aircraft carrier is different from all the other classes in World of Warships because it doesn’t fight directly with other ships. Instead, this warship class fights from a distance using aircraft squadrons. This means very little carrier gameplay involves actually maneuvering your warship; most of your time is spent controlling your planes.

For those trying carriers for the first time, get ready to spend some time rewiring your brain for a new play style. This guide will first cover the basics of how to play carrier in World of Warships, then get into a few advanced tips to get the most out of this warship class.

Got your eye on a premium subscription or warship? Redeem these World of Warships promo codes for rewards and bonuses that will take you closer to snagging the item you’ve been saving up for.

When it comes to sheer firepower, carriers don’t have the same DPS potential as your cruisers or destroyers. What carriers do offer, however, is effective intel gathering capabilities and damage output that’s steady and consistent.

Efficient carrier play revolves around a set of repeating actions called the “carrier loop.” Essentially, it consists of the following steps:

As a carrier commander, you’re also expected to spot and call out enemy warship locations on the map. The faster you can complete the carrier loop, the more frequently you can inform teammates of enemy positions and deal damage to targets.

You can speed up your carrier loop by memorizing and using these relevant hotkeys:

So, a typical carrier loop expressed in hotkey presses would go something like this:

Practice in a training room

Of course, the quickest carrier loop means nothing if you can’t actually hit your targets. Each aircraft carrier has its own setup of planes that it brings to battle, each with their own loadouts. To get the most out of your carrier, you’ll have to get a feel for how and when to release your bombs and torpedoes.

Each aircraft type works just a bit differently—i.e., some are faster, some deal instant damage, others have smaller reticules. You should pick a carrier and stick with it for a while.

While you can learn these timings as you play, we suggest starting in a training room or in a co-op session with a friend. This way, you can spend time getting your timing down before jumping into a real battle.

Stay as close to the action as safely possible

Once you’ve launched your aircraft, the in-game camera switches to plane control and you lose sight of your warship. This leaves you vulnerable to enemy attacks at any time.

The safest position for an aircraft carrier is as far away from the enemy ships as possible. But the further you are from combat, the longer it takes for you to get to your targets. This slows down your carrier loop and makes you less efficient in battle.

Getting too close, however, makes you easy pickings for cruisers and destroyers. Airship carriers have terrible on-ship defenses, so enemy ships will tear you to shreds in no time.

The best position for an aircraft carrier is somewhere that’s away from combat but close enough to get planes in and out of fighting range quickly. For this, you’ll need a little help from your friends.

Park your aircraft carrier nearby allied ships that like to strike from range, like battleships. They’ll protect you from enemy fire while you’re busy maneuvering your planes. So long as you keep feeding them intelligence about enemy positions, they won’t mind having to babysit you.

Gather intel for your team

Dropping bombs on enemy warships is ridiculously fun, so it’s easy to think that blowing things up is your main job. It’s not! A carrier’s primary task is to gather intel for the team.

Your planes give you a bird’s-eye view of the warzone. Use them to spot incoming battleships, hidden destroyers, and enemy flanking maneuvers. You should be constantly scanning your surroundings and spotting enemy targets from the moment your planes take off.

Even if you aren’t the greatest at fighting with your planes, your teammates will still appreciate any information you can give them about enemy positions and movements. And your constant vigilance could save your own life, too—when your carrier’s position is under threat, spotting the attackers signals the potential danger to your allies.

In naval combat, enemy destroyers are often the biggest threat to your team’s success. Luckily, aircraft carriers are particularly well-suited for taking out these aquatic monsters.

Use your planes to pick out enemy destroyers in a fight, then execute bombing raids on them. As a rule of thumb in World of Warships, you want to aim for their citadels. Just make sure you’re using the right planes for the job.

If the enemy ship’s citadel is underwater, torpedoes will do the job. Exposed citadels can be hit with regular strikes but typically have thicker armor than the rest of the ship. Armor-penetrating rounds are the general go-to in these situations, but not many carriers have great AP options. High-explosive rounds or semi-armor-piercing rounds will still do the job.

Don’t forget to call out the destroyer’s position as you’re raining down bombs. You want your allies to arrive ASAP so they can help you finish the job.

Carriers have a completely different feel the other ship types in the game. Many of the skills learned from playing other classes don’t really apply to carriers, and it can be hard to make the switch. There’s no quick way to master the carrier, but the tips in this guide will help you get over the early learning curve.

There’s nothing quite like going to battle on the high seas. Find more great naval warfare games in our list of the best naval games.

Part of what makes World of Warships so awesome is that it’s free! Read up on some of the best free-to-play games in this guide to the best free PC games.