Among Us kill animations — all the ways to kill your friends

These are all the different kill animations that the Impostor can perform in Among Us. 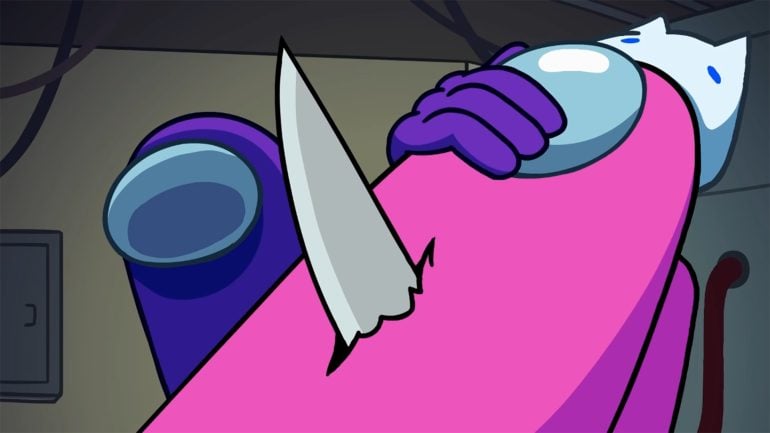 Dying in Among Us is a real bummer. Sometimes you’ve built a case for an Impostor’s ejection only to be offed before the meeting begins. Other times, by some unlucky roll of a die, you meet your maker before you can even get rolling. But at least there’s one thing we can all agree on: the kill animations in Among Us are pretty darn cool.

Unfortunately if you’re a Crewmate, the only way to actually see the game’s myriad of kill animations is by actually getting killed. The actual Among Us kill animation that’s played is chosen at random, so if you die enough times, you’ll eventually see them all. With only five unique animations, it won’t take you long.

If you’d rather not have to die repeatedly just to see all the kill animations, we’ve put together this of Among Us kill animations just for you. We’ve even got GIFs, so you can enjoy them in all their glory.

1. The Classic Knife in the Back

What better way to symbolize the deception and trickery of Among Us than a simple blade to the back when you least expect it? Knife goes in, knife goes out; rinse and repeat until the victim is as cold as stone. Sure, it lacks creativity and is a bit on-the-nose, but how can you criticize a classic?

Tap into your inner Steven Seagal with this sleek and simple method of murder. Two oversized hands appear from the nether to deliver a violent twist to your victim, separating the connection between mind and body. This may not be the coolest animation on this list, but it’s clean and tidy ⁠— no blood or guts to clean up after the fact. It does raise an important question, though: do the bean-like heroes of Among Us even have necks?

According to Innersloth, the Impostor is an alien parasite masquerading as a member of the Crew. This is the only kill animation in the game that actually uses that bit of lore. The Impostor widens its maw to reveal rows of sharp teeth before lashing its tongue out at lightning speed to skip past the visor and face and get right to the brain juices. Wait… so that suit is actually its skin?

What did the five fingers say to the face? After slapping the victim hard enough to knock them flat, the Impostor pulls out a piece, cocks the barrel, then finishes them off with a single bullet to the brain. The victim even begs for help just moments before the end ⁠— absolutely brutal.

Among Us awards — every nomination and victory

So far, the kill animations on this list have been somewhat grounded in reality ⁠— a knife in the back, a twist of the spine, a blast to the head, a tongue through the face (okay, maybe not so much that last one) ⁠— but this one comes straight out of a sci-fi horror show. The Impostor cocks their head back before unleashing a devastating stream of pure energy out of their left eye, absolutely obliterating the victim’s upper body.

This kill animation is a reference to a scene in Henry Stickman and is only possible if the Impostor has the Right Hand Man skin equipped.

That concludes our list of all the Among Us kill animations, but that’s not all the Among Us content we have covered, we have so many other guides that you should know about like Among Us toys, Among Us imposter and Among Us download.