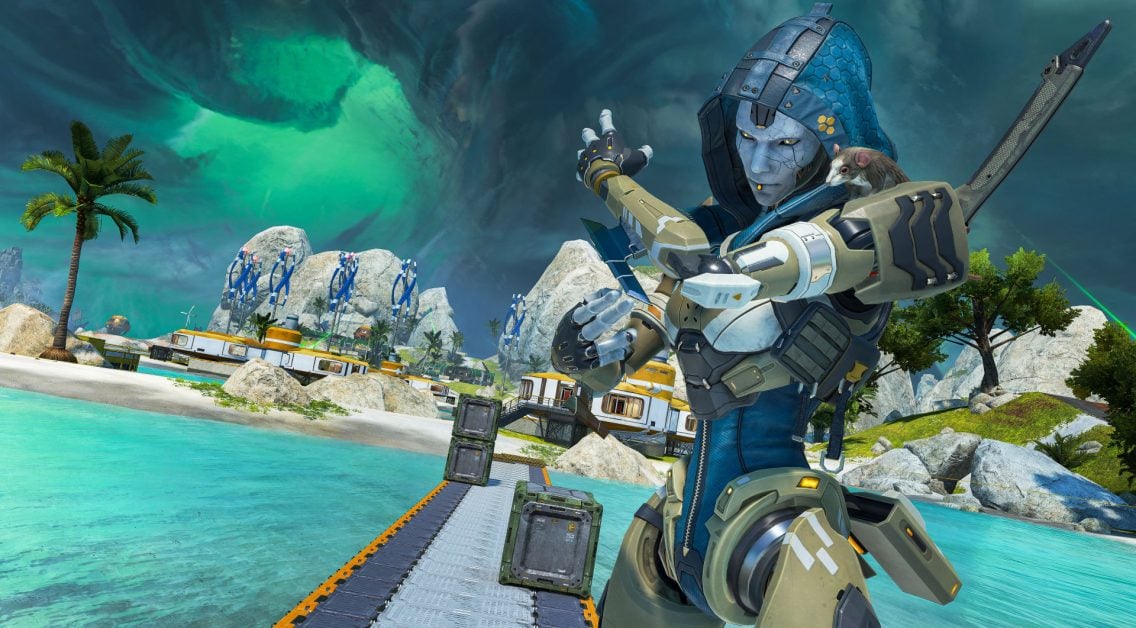 Strong from its success with Titanfall, Respawn stimulated people’s curiosity before release by hinting that Apex Legends was set in the same world as their previous title (30 years later, to be more precise). And if Apex Legends does have some common lore and the same character design for some characters, it is completely different from its predecessor. In good ole shooter/battle royale fashion, players interact with each other on a map with elements that can be exploited to gain certain advantages (for example, if the terrain is muddy, snowy, or jagged). Each character, called Legends, has its own set of personal skills, strengths, and weaknesses, which means that the gameplay is varied enough and since you are working in teams, the options are pretty vast.

Two gameplay modes are available: “Battle Royale” throws 60 players divided into 2 or 20 squads into an all-out war on a map that keeps shrinking and “Arenas” is a more classical 3v3 determining the winners based on the number of rounds won. Even if it is set in the same world as Titanfall, it was decided not to include the giant mecha as they would not fit with the essence of a battle royale. Apex Legends is cross-compatible, meaning that you can play with your friends even if they are using a different platform/console.

Time to dive in battle royale style onto Apex Legends statistics and facts! Additionally, for fans of data, we have complied another piece full of stats and figures, so be sure to check out our video games industry statistics article next.

The Legends, as they are called by Respawn, go in guns blazing…literally. With the nervous and fast-paced gameplay mechanics in the game, those fights are exciting and the players are kept on their toes as they dodge bullets, jump, and slide. Something they all appreciate. Plus, Respawn has one of the best gunplay out there.

1. The demographics in Apex Legends show that players are mostly male and under 35.

The average age of professional players is also a good indicator when it comes to age: with Apex Legends, there is a good mix, but it is easy to see that most players are below 25 and teenagers are not rare at all. The reason would be because each country has its own regulation regarding the minimum age to enter a competition. Otherwise, Apex Legends does suit its public as the game is obviously made for mature players, be it in its design or the way the characters are depicted. Even the gameplay requires more than just “pew-pew-pew-ing” your surroundings.

During its first month on the market, Apex Legends just broke records left and right. Contrary to popular belief claiming that the game was not promoted at all (but still managed to be successful), Respawn actually promoted it heavily in a way that would look natural for gamers and that would not be noticed by casuals. The promotion was made through big Twitch streamers and YouTubers. A direct approach to the targeted audience.  Public figures like Ninja were paid a hefty amount to showcase the game.

As it was bound to happen, somewhat, the title saw a drop in numbers over time. Those remained pretty good though, showing that the game had an intrinsic quality to it. EA even shared that they observed a continuous growth of 30% year-over-year. The continuous increase must be the result of the team at Respawn making sure to deliver new content as often as possible while ensuring quality. The different seasons bring their own lot of new characters, maps, perks, missions, and weapons. And the addition of the new “Arenas” mode changed a lot of things: before it was included, up to 37% of Valorant and CS: GO players were never tempted by Apex Legends. And that says a lot as those three fanbases do intertwine.

4.  Apex Legends has generated $1.6 billion in lifetime revenue through microtransactions.

The game reached the status of “billion-dollar game” way before EA actually thought it was going to happen. The company was betting on late 2021 (as in the last day of the last month), but it literally happened at the beginning of 2021. The franchise is also one of the biggest and most lucrative games EA owns (with FIFA) and the profits it brings home represent a substantial part of EA’s total revenues each year. Another sign of quality here is that the game made more money in 2021 compared to 2020: people were even more willing in a “normal” life rather than in a life where they were forced to stay home 24/7.

5. The game has received over 50 awards and nominations over only 3 years.

Even if the “Legends” in its name refers to players, it also suits the game pretty well. 50 accolades and awards in a matter of only three years are no small feat at all. And amongst them, you can see big events such as the BAFTA and its constant presence on the Game Awards’ lists. 2021 is not over yet so award season did not start, but let’s hope that Apex Legends will snatch some good ones this year too.

Time to take a closer look at how the game is consumed by the community. With its worldwide fame, it is not difficult to imagine that the community is well invested. Plus, considering the fact that the game has several different characters, we can also take a peek at which ones are the favorites. From the countries playing the most to how Apex Legends-related content is produced and absorbed, we got it all!

6. The United States is the country with the highest daily participation with 38.92%

The fact that most players were from the United States and the UK is old news, but a fact that can be a bit rare is that we also see China in the top 5. Not that China does not play games, but between the withholding of information on their part and the fact that they have access to games the West does not (Tencent is Chinese, after all), it is not often that we can actually get numbers like that out of them.

Even as ranked matches, 3v3 has a more relaxed vibe, therefore what we see is closer to the characters each player was the most comfortable with than the ones they felt they had to go for to win as they were most suited for the situation. All in all, if you are a regular to Apex Legends streams, you must already know that Pathfinder is a big fans’ favorite. Those results are from season 10 et ranked matches only.

The contrast with the ranking including all players (not just the best ones) is quite stark. The favorites for the best players are actually at the bottom when we also add casual to normal gamers. Even the ones with the most games played (meaning that they have been picked quite often) are nowhere close to that #1 spot. That ranking is a hint to which characters are best suited for long, drawn-out battles. Quick note: season 11 has no final ranking, for now, so those are the results from season 10 and only in ranked matches.

9.  Octane is the most popular with players in general, all rankings included, with a pick rate of 11.6%.

Here are the favorite characters of players in general and the new character introduced in season 11 in November is already in the starting blocks. Ash IS an excellent character and was also in Titanfall 2 as the antagonist. Notice how right after the powerhouses, we have the two medics following in the ranking. Priorities, people, priorities.

A Twitch legend! The game set its own records on launch day and until today, maintained its status as one of the most appreciated/streamed games on Twitch. The number of hours accumulated in just a week is absolutely insane! Let’s not forget that Twitch is only one streaming platform out of at least 4 other big ones: YouTube, Facebook, and Discord. We can only wonder what those numbers look like on the other side. The fact that Apex Legends is a big name in eSports helps in boosting those views and it sure is nice for the streaming platform(s) with the rights to stream the events.

The game was launched on Steam in 2020 and started pretty well, only gaining momentum month after month and quickly reaching great numbers. We can see that Steam players were eager to finally have their own version of the game. There is even a jump of 50% between January and February 2021, showing when the game made itself fully comfortable on Steam. If you look at the biggest numbers, you will notice that they tend to coincide with the release of a new season. The highest number of concurrent players has to do with the addition of the “Arenas” mode, though. However, the numbers barely decrease after a while showing that each season brings something that makes the players stay.

Like several other shooters/battle royale games, Apex Legends was made for eSports. Respawn sniffed the opportunity of course, and was already planning how the game would be used on the competitive scene before its launch. Therefore, right after it was released to the public, Apex Legends was already forming teams and planning tournaments. It’s one of the most sought-after games for competition as the prize money is really good.

Those are the last tournaments part of the Apex Legends Global Championship, which is the biggest tournament professional players can enter. EMEA was for European countries while NA was for North America (which means that it was only the US and Canada, with one unique Mexican player).

American players are known to be among the best, if not the best, in Apex Legends, even dominating smaller and normal rankings. It is nice to see Croatia with a nice rank as they do not have a lot of players.

A country we do not see that often in the countries earning the most in eSports is Thailand. They even surpassed Russia, a country that is not a stranger to such. South Korea is obviously well-ranked as eSports in teams are their forte. The whole chart is the perfect proof that Apex Legends went viral internationally and that it is a phenomenon all around the world.

Apex Legends enjoyed the savoir-faire of Respawn and EA (let’s not forget that Star Wars MMO that did very well over 7 years) to make sure that it was here to stay. The devs hope that they will be able to keep it like that for 10 years and even more if possible. The departure of Chad Grenier, Respawh co-founder, and Apex Legends director, recently is a punch to the stomach, but as he said himself, the studio still has a lot of content already planned for the years to come.

The franchise came out of nowhere and revolutionized the battle royale monopolized by Fortnite until then. It brought major innovations. Such as the fact that you could respawn after getting killed, instead of staying down and having to wait for the end of the rounds or the ping system that allows players to communicate with each other, without having to resort to voice communications. Specific orders are sent in a matter of seconds: no useless blabla, no mistakes, no way to lose your focus because of a player screaming that they need more ammo.

And they are not ready to stop as season 11 proved to us that the team at Respawn knows how to refresh not only the game but themselves too. The new tropical map brought new challenges that players really appreciate and Ash is already a favorite with the fans. Apex Legends seems to know what to do and how to do it.