PC parts and their functions explained 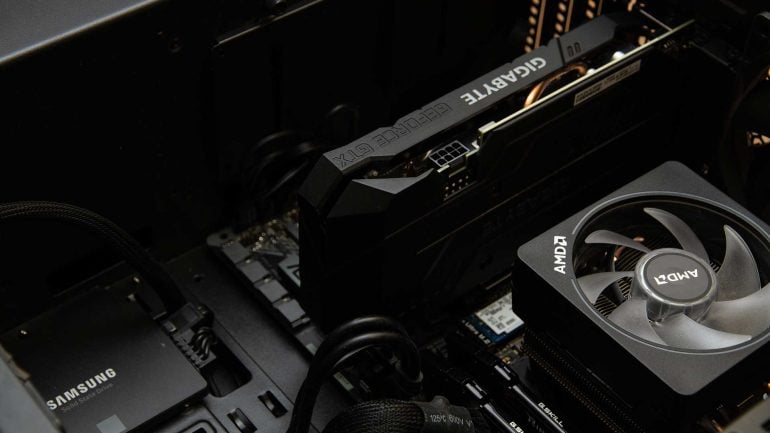 Today, we’re talking about the main PC parts and their function. We’re going to list major components found in every PC and explain what it does. We also have a ton of comparisons between PC parts and the human body. After all, our bodies are biological machines. They’re made of many parts that need to work together for the whole machine to function, just like computers. Anyway, let’s start with the CPU.

The CPU, which stands for central processing unit, or processor, is the most recognizable component of every PC. Whether it’s the most critical component is a discussion for another day, but it’s vital. You can compare it to the brain, at least parts of the brain responsible for critical thinking, writing, problem-solving, coordination, and coming up with conclusions based on evidence.

The CPU is a chip made of large processing cores, which are responsible for most tasks. All CPUs also include cache memory, a certain number of fast PCIe lanes, and RAM controllers. Some CPU dies can also have integrated GPU chips, viewed as standalone entities even when sharing the same die with the CPU. You can find CPUs in most electronic devices. If a device can process code and run software, it has a CPU.

The processor is responsible for most PC functions and is the brute force used during casual and professional use. It’s also the second most crucial component for gaming. The CPU runs program code, and then that code tells the CPU what to do in the form of instructions. It then communicates with other components, tells them what to do while at the same time running multiple programs at once. While it’s the better part of a PC’s brain, it can’t run code properly without other components.

Disregarding the power supply, the PC needs a GPU for sending the video signal to the monitor. CPU also needs RAM to keep the apps open and functional. It also needs storage to access and open the said programs, open files, install new programs and games, and boot up the operating system. It can also do assignments reserved for the GPU, such as playing videos, but not as efficiently as the GPU. Finally, a CPU needs some form of cooling to keep its operating temperature in check.

The graphics card or GPU (short for graphic processing unit) is responsible for all things visual. It plays videos, runs video games but is also used for tasks that, in the past, were reserved for the CPU—stuff like video encoding, rendering, photo editing, etc. The GPU is very similar to our brain’s visual cortex.

They both create visuals based on information received from external sources. In our case, it’s the, well, the visible light. The receptors in our eyes receive the stimuli and transform them into neural impulses (which are feeble electrical signals). They are then sent to our visual cortex and reconstructed by neurons residing there. In the case of the GPU, the stimuli are instructions received from programs that tell the GPU just how to create the visuals we see while using our PC, play games, watch videos, etc.

Unlike the CPU, each GPU consists of a bunch of small cores (CUDA cores in Nvidia GPUs, stream processors in AMD GPUs) grouped in larger entities (streaming multiprocessors in Nvidia GPUs) that work in parallel to create the said visuals. In the past, these cores were highly specialized for graphics-related tasks. But these days, you can use GPU cores for other purposes. For instance, for rendering, video encoding, file compression, encryption, etc. CUDA cores found in Nvidia GPUs are also used for machine learning and complex simulations. Finally, let’s not forget about crypto mining.

Each GPU includes other cores, such as the TMUs (texture mapping units) used for applying textures to models, and ROPs (render output units), used for antialiasing and rasterization. In recent years, Nvidia graphics cards also include RT cores for real-time ray tracing and tensor cores for various AI-related purposes. The most popular usage of Tensor cores at the moment is for Nvidia’s machine learning DLSS technology.

GPU also needs memory access to handle the visual and other data. In the case of standalone graphics cards, you have memory chips on the same PCB as the GPU die. In the case of integrated graphics, the GPU uses a portion of system memory as its video memory.

The motherboard is similar to our peripheral neural system. It connects the brains of the computer (CPU and GPU) with the rest of the system. But the motherboard also connects the CPU and the GPU, meaning that it plays the role of the white brain matter, thick tissue made of axons (nerve fibers) that connect nerve cells in the brain. Nerve fibers, in this instance, are the super-fast PCIe lanes. There are three main motherboard form factors: ATX, ITX, and mATX. The first one is by far the most popular.

The motherboard also provides some essential functions, such as the USB controller and sound processing. In other words, you can also view it as a brain’s auditory cortex. The lanes connecting different PC components spread all over the motherboard. These lanes (PCI and PCIe) support data transfers between various components, with the CPU coordinating the communication between all of these components.

The motherboard is also responsible for supplying power to the CPU, memory, storage, and part of the power for the graphics card. Its PCB also features power connectors for the CPU and case fans. Finally, we shouldn’t forget about BIOS (short for Basic Input-Output System), which is an integral part of every motherboard used to wake up the hardware and prepare for the OS boot.

RAM is the PC’s short-term memory. CPU uses RAM to store temporary data for programs that are running on the PC, as well as for the operating system. This way, the CPU can access the data at any time and with a very short delay, allowing it to swap between different active programs. Random-access memory is high-speed and it’s a volatile memory. In other words, it can only store information while powered. Once you cut the power to RAM, the data’s gone.

If your PC doesn’t have enough computer memory, it can feel slow and it could take some time to respond to controls. It’s because the system cannot keep all temporary data in RAM at once, forcing it to flush chunks of data not currently in use and send new bits to the memory. This makes the PC slow because it takes time to flush information from RAM and replace it.

In other words, make sure you have enough memory for your specific needs. For gaming, 16GB of RAM is still a sweet spot. For professional use, more memory equals better performance. That said, you can have too much memory, so try not to go overboard relative to your needs and workflow.

In PCs, storage plays the role of long-term memory. There you keep all program files, OS files, games, as well as other files you might use. Such as music, videos, Word documents, excel sheets, and all other kinds of files and data you can keep long-term on your computer. And once you start a program, it launches and sends all temporary data it needs while opened to RAM.

Out of the two storage technologies, hard drives are much slower than SSDs (solid-state drives) when reading and writing speeds. This is why an operating system boots so much faster on a computer equipped with an SSD. While hard drives use magnetic disks for keeping data and moving parts, which then take time to move and write or read specific data chunks, SSDs use flash memory that can be accessed instantaneously.

While hard drives have two similar form factors (2.5” and 3.5” drives), SSDs come either as 2.5” drives that are very similar in shape as hard drives or in M.2 form factor that includes both SATA and NVMe SSDs.

A power supply is your PC’s heart. It powers all components, and once it turns off, the PC cannot function anymore. This is why it’s important not to cheap out on a PSU. If it dies in the middle of meaningful work, you can lose hours, sometimes days’ worth of labor. Even worse, cheap PSUs can have low-quality components and bad overcurrent protection. This can lead to the PSU dying and taking a component or two (or more) with it.

The PSU includes the housing, where all the power-related stuff is. PSUs also have cables used to bring power to the CPU, GPU, and other components. These cables are marked, making it hard to use inadequate cables and fry your PC. You have ATX power supplies, which can fit in mid-tower and full-tower cases. There are also SFX-L and SFX power supplies, which are of smaller dimensions and can fit into ITX cases.

We use these components to cool down the PC and specific components. While CPU and case fans and CPU heatsinks use the combination of air and heat-transferring metal to cool the components, AIOs and custom liquid cooling setups use flowing water and heat-transferring metal for the same purpose. No matter if they’re based on air or water, the motherboard powers all cooling components (aside from fans used to cool the graphics card) via connectors found on its PCB.

When it comes to fans, you can use most fans both as case fans and a CPU cooler and radiator fans. Cooling fans specialize either for the role of case fans, or CPU and radiator (used for liquid cooling) fans. The former excel at moving air when there’s no obstruction (they have higher cubic feet per minute, or CFM, rating) while the latter are better at moving air through obstructions (they have high static pressure).

The case is like a PC’s exoskeleton. This is the housing for all components, where they are safely mounted and cannot move. Each component has its place inside the case. You hook up the motherboard and all components connected to it (CPU, graphics card, RAM, etc.) to the side of the case, usually on the right side. We call the side panel where you mount the motherboard tray. Behind it, you can find a bit of space reserved for cable management.

PC cases come in all forms and sizes. You have regular, mid-tower cases, large cases called a full tower, and small form factor cases (ITX cases). PC cases can specialize for high airflow or silent operation, they can be chock full of RGB, and their design can favor air or water-cooling setups. You have both vertical and horizontal cases, and they come in a range of colors.

Monitors are display devices used for showing the image data coming from the PC. They differ from TVs in many ways while staying quite similar to their closest cousins. They come in a variety of sizes and resolutions. The fastest gaming monitors have ultra-high refresh rates that translate into clearer motion and faster response time, which might improve your performance in quick multiplayer titles.

Every monitor has a display, an assortment of video inputs (mostly HDMI and DisplayPort), and physical controls for turning the device on and off and tweaking image settings. When it comes to their displays, they either use one of the three LCD technologies (IPS, VA, and TN) or (a small minority) OLED panels.

Last but not least, we have mice and keyboards. They are input devices used for traversing through the user interface and for command inputs. Both can be either wired or wireless and while in the past, wired peripherals were slower than their wired counterparts, you have wireless mice and keyboards that are as fast as the fastest wired models.